When Andres Angelani was growing up in Argentina, his family’s dining table was like a miniature boardroom. His father was an entrepreneur who started his own company, went bankrupt a handful of times, and was always brainstorming his next move during breakfast, lunch, and dinner. “The instability of Argentina at the time wasn’t a favorable business environment for him, but he always lifted himself back up,” Angelani says. “We were always talking business around the house. It really equipped me well for what I was about to do.”

Angelani is now CEO of the digital product engineering company Cognizant Softvision (a division of Cognizant Digital Business), though when he was growing up, he didn’t consider himself a people person. “I was always kind of a nerdy tech guy,” he says, laughing. “I played classical piano and preferred systems instead of people.” Over the years, he’s not only come to appreciate people, he’s also realized he’s good at working with them—and the wisdom he absorbed from his entrepreneurial father helped as well. “I’m a growth leader,” he says. “I always have been, not just in terms of how much a business can grow but also in terms of its people.”

Prior to being hired at Softvision in early 2017, Angelani spent nearly thirteen years developing his skills at IT and software company Globant. When Angelani joined the team there in 2004, the company had fewer than thirty employees; in 2019, it did nearly $700 million in revenue. He opened business lines in the UK over three and a half years, developing business for the rapidly expanding company. He then moved his family to the United States to develop key accounts, including Disney, that were essential to Globant’s successful public offering in 2014. After two years of operating as chief solutions officer, Angelani realized that if he wanted a CEO role, he’d need to move on. But the man who came to Globant was not the man who was leaving.

“When I was in the UK, I started realizing that I might be able to do the ‘people thing’ well,” Angelani explains. “Prior to that, I thought I was terrible with them. I’m very demanding and black and white. It created a lot of friction. We would deliver great results but it was a very rocky way of dealing with people.”

After moving to the US, Angelani was tasked with building a game development wing from scratch with partner Electronic Arts (which included work on some of the world’s largest sports video games, including the FIFA series, the NBA2K series, and the NHL series). Along the way, he says, he learned “an entire career” of team-building, interactive software development, and delegation. “That’s where I learned I’m a growth leader,” Angelani says. “But I’m not the boss who wants to hold your hand and tell you how great you are. I’m not the ‘nice’ guy. I’m sort of the ‘tough love’ type, and I feel great joy seeing my team grow into better professionals and leaders.”

Angelani’s style may not be for everybody, but in coming to Softvision, he was able to use his talents to help turn around a precarious situation. “When I arrived, there was a high level of debt and the company wasn’t in good shape,” he says. “I had to cut a lot of costs and talk to the banks to make investments.” The company completely redid its go-to-market strategy and in just two years, it was acquired by Cognizant for three times what the private equity firm that owned the majority stake had invested in it.

It’s a resounding success story, but Angelani doesn’t simply want his Cognizant Softvision story to be written as a turnaround. “If I have to do what I need to do in order to get the company back in shape, I’ll do it, but I’m more interested in what the vision for the industry is going to be,” he says. “After things are turned around is when the real fun starts for me, because it requires vision.”

Angelani believes Cognizant Softvision is in a position to be the top digital pure play in the market. “We agreed to this acquisition because Cognizant loved how we run our business, cultivate communities, and deliver as cross-functional teams,” Angelani explains. “Now we have the opportunity to influence on a much more prominent stage, and my team has the ability to use what they’ve learned and make Cognizant lead in digital.” 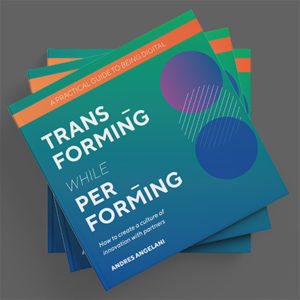 When Andres Angelani isn’t leading transformation on behalf of global Fortune 500 companies, he’s writing about it. The two books he’s written—Transforming While Performing: A Practical Guide to Being Digital and The Never-Ending Digital Journey: Creating New Consumer Experiences through Technology—are filled with what Angelani says is simply the game plan he himself has followed for transformation and success.

“I was really lucky to work with different types of companies in different industries and at different stages of transformation,” he says. “There is a pattern. The solution is the people and the culture, but there are patterns across industries that you can use to make the transformation smoother and impact the people positively.”

Katia Beauchamp Is Revolutionizing the Culture of Work