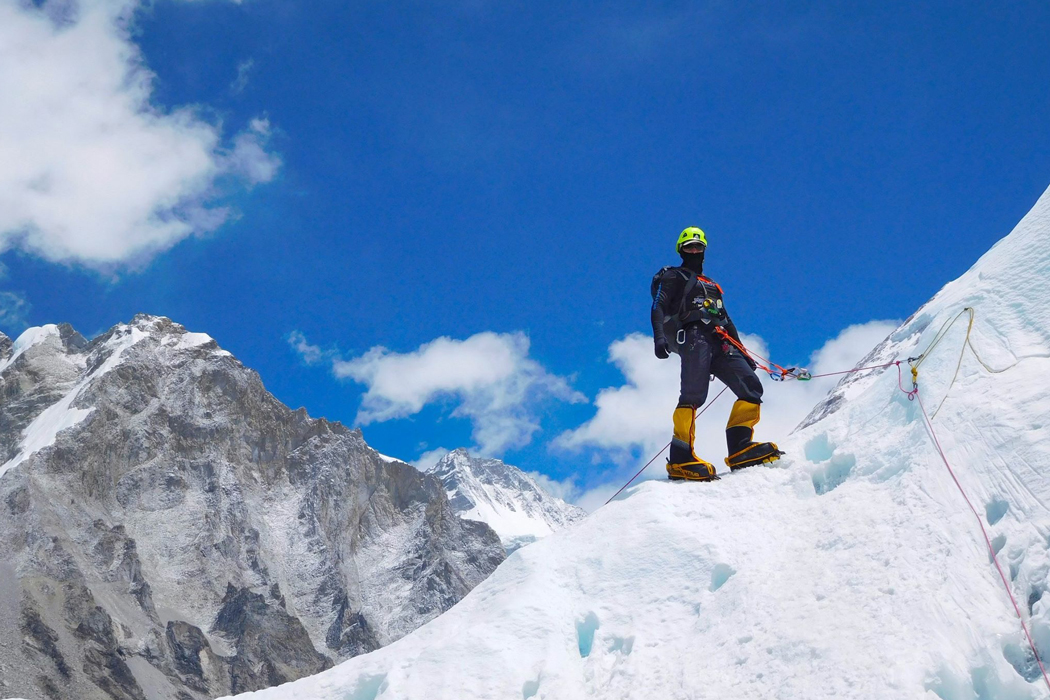 Imagine the sound of snow crunching under your boots as cold wind whips your face—not a shivering cold but a sneaking cold that hits you as the air grows thinner, a cold that leaves a tingling sensation so strong you can practically feel the frost forming on your nose.

Mount Everest is the earth’s highest point above sea level. Scaling this mountain’s peak is an icy adventure that has attracted thousands of brave climbers over decades. Some have been lucky enough to reach its twenty-nine-thousand-foot summit, while others have been forced to turn back due to the merciless conditions of the climb. Some, unfortunately, have never returned.

Marcelo De Santis has experienced the unparalleled beauty—and ferocity—of Mount Everest two times, and planned to return for a third trek in April 2020 before the COVID-19 pandemic forced him to reschedule. And for a serious climber like De Santis, rescheduling doesn’t just mean rearranging the logistics of the climb: for months leading up to an Everest climb, De Santis sleeps in a high altitude tent in his living room. He uses an oxygen mask while climbing up and down the many flights of stairs in his building, and mentally prepares himself for what he knows will be a difficult journey. And for this third climb, the required mental preparation is more intense than ever before.

De Santis’s decision to return to Everest despite the harrowing events he faced on both of his previous climbs—an avalanche that claimed the lives of his climbing partners in 2014, followed by an experience with pulmonary edema during his ascent in 2016—is evidence of both his fortitude and his drive to support a greater cause. For his third attempt at conquering Everest, De Santis joined a climbing coalition called Elevatinx, which serves to elevate the importance of UNICEF and that organization’s mission to alleviate the needs of underprivileged children worldwide.

“UNICEF—that is my passion. I would devote 100 percent of my time to it if I could,” says De Santis, who currently serves as a board member of the organization.

But UNICEF is just one in a long list of organizations that De Santis is devoted to serving. He is also a board member of the Hispanic IT Executive Council (HITEC), a board member as well as president of Angeles Investors, and the founder of an executive coaching and professional training company called Ascent. And somehow, he still finds time to lead digital transformation as executive advisor at global software consultancy ThoughtWorks Inc., where he works with other tech executives to advance their corporate innovation strategies.

His work focuses heavily on transforming companies at the intersection of people, data, and technology. De Santis understands that these three aspects have a strong influence on one another and, by uniting them into a single picture, he’s able to create a framework that supports digital business.

“When we go to a company, we look at the architecture of the company—the technology and the organization structure. Is it responsive? Is it fit for the digital world?” De Santis explains. “We look at the data capabilities, and we look at the practices that the software engineering team is using.

“But the most important thing we look at,” he continues, “which brings everything together—data, technology, and people—is how an organization works, not only within the technology department but within in finance, legal, and marketing.”

If you want to build a business model in which you use customer feedback to continuously upgrade your product, De Santis says, the time to market will inevitably be affected by the technology’s department ability to collaborate with other departments. That is why “we look at the operating model of the whole company,” he says.

Receive stories like this in your inbox every two weeks!

But as De Santis knows, changing the way that departments interact with one another—and often changing the way that the organization as a whole works—takes a lot of energy. “That’s where ThoughtWorks really has a lot of value,” he says. “We know how to structure companies that have digital at the center of their business model.”

Of course, to De Santis, effective digital transformation is about more than just reconfiguring the operations of a business. Any such transformation, he emphasizes, must account for the ethics of data usage. Simply put, data integrity has to do with the accuracy of data and the consequences seen when one uses inaccurate data. Most business models today are heavily tied to data, and consumers are often drawn in by the algorithms employed by those businesses. “We’re seeing [companies] use [data] capabilities to sell products as well as to solve problems,” De Santis explains, adding that many large organizations rely on data analytics and artificial intelligence (AI) as part of their business models.

But what are the consequences of such tactics? Some might be mundane, such as when Google Maps underestimates the length of a journey downtown. But some have truly detrimental effects. “If we use AI for situations that are much more critical, like how we use AI in the criminal justice system or how we use AI to recruit people, that’s where we need to be careful,” De Santis points out.

De Santis is quick to clarify that he heavily supports digital innovation, but he affirms that it must be done responsibly. “Whatever data we put into these algorithms,” the tech guru states, “that’s what we are teaching the algorithm to do.” He compares building artificial intelligence to raising children. “If you [teach] your kid good values, the foundation of the character of that person is going to be strong. But if you don’t do it well, then you will have problems down the road. I think that we need to rethink how we teach algorithms to make the right decision for us.”

To De Santis’s mind, the solution is about combining education and governance—companies must first become well educated on AI and its impact on their businesses and customers. Then, they must think about how to build governance around it that ensures the outcomes are the expected ones.

He acknowledges that education is a critical aspect of evolving AI in the right direction, and that we must start educating the next generation now. “If we educate our kids to understand what AI means, how it works, and how it could impact others, they will grow up with a natural sense of ownership and responsibility for keeping AI technology within ethical guardrails,” he says.

At the end of the day, De Santis stresses, focusing on the responsible use of data and technology will only benefit the human experience. And to De Santis—who has dedicated his life to helping to improve the lives of others, be it on a mountain or in an office—that is what matters.

“My drive is life,” De Santis says. “It doesn’t take a special skill, a title, a position in a company, or anything. It just takes two things—generosity to offer that time, and compassion to put yourself in the shoes of whoever you want to help. The opportunities to have an impact in this world are all around us. If we all do our part, we could really change the world.”

Last January, Hispanic Executive‘s publisher, Guerrero Media, hosted the latest in a company-wide event series called OpenWork. This series is designed to highlight some of the world’s most inspiring minds in business, which is why Marcelo De Santis was invited to come on stage to share what he has learned as both an innovation leader and a humanitarian driving toward global change.

NextGen Collective: On the Shoulders of Gigantes

Griselda Aldrete Can Be Found on the Battle Lines

Abby Figueroa Sees Beyond the Numbers