It’s a rare leader who can speak with equal fluency about business, labor, profits, and markets—but also about sports, demographics, music, entertainment, and popular culture—and then somehow weave them all together.

Trujillo knows how to make businesses work better, how to create products that consumers buy, how to streamline production to maximize efficiency, and how to communicate a vision to get buy-in from shareholders and employees.

Those are things you learn at Harvard Business School—or, better yet, from the School of Hard Knocks.

But he has another trait that pays huge dividends in life, and it can’t be learned at either of those places: How to be a good person. You know, the kind of person with whom other people want to do business.

Don’t let this get around, but besides being a tough businessman, Trujillo is also a genuinely good person.

To learn about his business acumen, you could read his bio, look over his résumé of accomplishments, watch a video of one of his speeches, interview associates, or peruse the dozens of articles written about him over the years.

You can also study the accolades: at age 32, the youngest executive officer in the history of AT&T; the first US-born Hispanic to run a Fortune 150 company, U.S. West; first American to lead a CAC-40 company, Paris-based Orange, SA; one of the first major-company CEOs to build a diverse board of directors; revolutionary leader in the tech space (before anyone called it that) innovating and deploying wireless, broadband, and smartphones; recipient of the Ronald H. Brown Corporate Bridge Builder Award from President Bill Clinton and a member of President George W. Bush’s Trade Advisory Council; member of various corporate boards for companies like Target, Promerica Bank, London-based WPP, Western Union, PepsiCo, EDS, Gannett, and Bank of America; and cofounder of the Latino Donor Collaborative, whose mission includes improving the image of Hispanics in media and entertainment.

All of that is public knowledge. Google it.

The only reason I know about the “good person” part is because he is my friend, and he has been for about eight years. That doesn’t mean we agree on everything—you know better, we’re Hispanic. Disagreement is in our DNA.

Ask Trujillo and he’ll tell you. We probably agree half the time. The other 50 percent, I’m wrong.

“I have always been a guy who is a Latino. I’ve been a businessman and CEO … but that doesn’t mean that you can’t be who you are and reflect your heritage.”

Having amassed enough wealth and racked up enough achievements for more than one lifetime, Trujillo has earned a calm, restful, and uneventful retirement—which would drive him quite mad.

What is he supposed to do? Play golf? He hates golf. He loves tennis. But what he loves more is coming up with ideas and making them realities.

And Trujillo’s best idea is the one he hasn’t had yet.

If I had to explain in a nutshell what drives my friend at this point in his life—when he has nothing left to prove to anyone, except maybe himself—it would be this: a passion to convince Hispanics in the United States that they have something great to offer this country, while convincing non-Latino Americans that Hispanics have a lot to offer.

Like having a finger on the pulse of popular culture, and a keen appreciation of the power of social media.

Like being the driving force behind the majority of economic growth in this country.

Like amassing a GDP of $2.13 trillion, which is larger than the GDP of India and growing faster than eight of the top ten economies in the world.

Like accounting for 70 percent of the increase of the US workforce in the first part of this decade.

Trujillo is well-acquainted with the power structure that runs Wall Street, politics, media, academia, entertainment, etc. He spent his whole life being one of the few Hispanics—if not the only Hispanic—in the room, surrounded by people who knew so little about people like him that they would mangle his name: “True-Jill-Oh.”

Trujillo also knows the Hispanic community—58 million people, $1.8 trillion in buying power, and a presence in all 50 states. He prides himself on not forgetting where he came from, or how to find his way back. “I have always been a guy who is a Latino,” he once told me. “I’ve been a businessman and CEO … but that doesn’t mean that you can’t be who you are and reflect your heritage.”

Naturally, since he knows these two groups so well, he has taken it upon himself to make the introduction.

Meanwhile, Trujillo’s own feet are planted firmly on the ground because they were put there by his parents—his primary role models who, as he recalls, “worked harder than anyone could work” without complaint.

It was Trujillo’s parents who taught him to always look people in the eye—that is, to never look up at anyone or down on anyone.

He never forgot that. Even as he traveled a road that was, at times, complicated.

Here you have a guy who grew up in—of all places—Cheyenne, Wyoming, and he and his family experienced their share of racism. Yet there was still more in store for him, many years later and halfway around the world, while he was in Australia serving as CEO of the country’s biggest telecommunications company, Telstra.

Here you have a guy who loves, more than anything, his family—his wife, Corine, his daughters, and his grandkids—but who still dedicates much of his time to his work and the international travel it demands.

There are also the Trujillo paradoxes.

He wants Hispanics to not be pigeonholed as a special-interest group but integrated into the mainstream, yet he doesn’t shy away from branding Hispanic initiatives as such, even if it sets them apart from the mainstream. Trujillo would say that Hispanics no longer need to be accepted by the mainstream because they are the mainstream.

Recently, I caught up with my friend to check in on his latest ventures and adventures.

I started by asking him what he thought of a new law, here in California, that requires that women be put on corporate boards of publicly traded companies.

“Well, first of all, I’m not a big fan of government interventions,” he says. “But, in the case of this legislation requiring women on boards, it probably makes sense if the numbers are weak. I would say it’s a business imperative as opposed to regulatory imperative.”

California is 40 percent Hispanic, I reminded him. What if there were a similar law, I asked, requiring publicly traded companies in the state to put Hispanics on boards?

“Well, again, if you know that 70 to 80 percent of your growth is tied to one customer cohort,” he says, “I almost call it a CEO IQ test. If you don’t have a Latino on your board or in senior management, I would question the board. I would question their governance processes. … It’s not about social policy; it’s about good, smart business.”

Speaking of business. I asked Trujillo to assess, on a scale of one to ten, the financial strength of US Hispanics. I could see the glass as half full—or half empty.

“Based on total numbers, I would say it is probably at a five,” he says. “So it’s not where it can be, it is where it is. But it’s dramatically improved from a decade ago. And I can tell you, a decade from now, it will be dramatically better than where it is today because of the number of people moving into income-generating ages, and the people who are already in the workforce today will continue to progress because they’re the highest-educated cohort of Latinos that we’ve seen in the history of our US Latino population.”

The future of the Hispanic community, Trujillo insists, is all wrapped up in the educational system.

“The US Latino is matriculating on to college higher than any other cohort,” he says. “Those are all positives. I mean, if you were to write an optimistic story about the United States of America, this is the story.”

Finally, given that one’s career is a marathon and not a sprint, I wondered what advice my friend would give Hispanic executives who are in the middle of the race.

“Well, I’m a performance-based person and ever since I was young in my career, I learned that I had to be ten times better than everybody else,” he says. “So I could have sat back and whined and complained and said, ‘It stops here.’ [But instead] I said, ‘OK, if those are the rules of the game and I have to be ten times better, then I’m going to figure out how to be ten times better.’ I think it’s not that way today; it’s not that extreme. But, in some cases, some people have to overcome perceptions and other [adversities]. My answer is: Always figure out what is the performance that people find great and go be great. Go perform at those levels because people like people who perform well.”

But what if they are performing, and they have already put in twenty-five years, and hope to put in another twenty-five years before they step away from the course? How do they finish strong?

“Figure out what you want, number one,” he says. “Number two: [figure out] what gets you there. I would argue that eight-and-a-half times out of ten it’s always performance. Be relentless about performance. Be relentless! You have to take risk. The most successful leaders I’ve seen are people who, along the way, had to take risk. You have to have that appetite, to sometimes be wrong, to sometimes fail. But you get back up and you go at it again, and you succeed.”

Take it from someone who has, in more ways than one.

Read more from this interview ⟶

Ruben Navarrette is a syndicated columnist with The Washington Post Writers Group, author of A Darker Shade of Crimson: Odyssey of a Harvard Chicano, and host of the podcast Navarrette Nation. 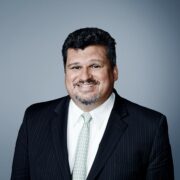 Conversations at the Top:
Sol Talks