Ariel Acosta-Rubio and his wife, María Alejandra Bravo, opened the doors of the first Churromania in 1997 in Puerto La Cruz, Venezuela.
By Evan La Ruffa

Every Friday morning a group of ladies in Tampa, FL get together for a sweet tradition. They pick a table at their regular pastry shop, place their orders, and settle in to catch up on each other’s lives while treating themselves to specially made, fresh churros. The shop is one of Ariel Acosta-Rubio’s, cofounder of the international churro chain, Churromania. 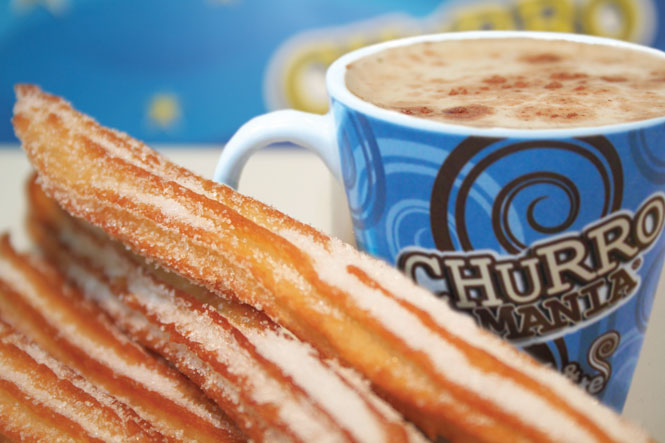 Acosta-Rubio’s story is of one Venezuelan entrepreneur’s drive to fill a demand. He dabbled in a few different areas after graduating from the University of Tampa, working on the managerial level in real estate, construction, property management, communications, hospitality, and tourism before starting his greatest venture to date.

Having a background in so many different fields has allowed Acosta-Rubio to be a more effective CEO. Lessons he’s learned from each of those roles has put him in the position to achieve sustained growth with Churromania. Acosta-Rubio built the company from the ground up, and the CEO is poised for rapid expansion of an already global business.

The business began modestly in Puerto la Cruz in the state of Anzoátegui, Venezuela. Acosta-Rubio along with his wife, María Alejandra Bravo, and his cousin Miguel Bravo bought a small storefront at a mall. Not knowing what to do with the location, when Bravo suggested they sell churros, the team of three thought it sounded like a unique idea. Churros are a cold-weather treat, and they would have little to no competition selling them in the warm city near the ocean. After some trial and error, a great product was developed, the menu expanded, and the second location was opened only nine months after the first. Acosta-Rubio was able to develop his vision for expansion while long lines of hungry Venezuelan shoppers formed outside the stores, and fans waited to secure their crispy churros and rich hot chocolate. Not only did they have a delicious offering, they had found a way to tap into cultural norms and became part of their consumers’ everyday routines.

Acosta-Rubio set a clear goal to take Churromania global. He knew they had a winning business concept with great franchising potential. It would now be a matter of having targeted focus, attention to detail, and scalability. As such, they opened their first store in the United States in 2001 at the high-traffic, Miami-based Dolphin Mall to great success, quickly working the initial lumps out of the batter—such as the flour ratio that had to be perfected at the new location.

In an effort to gain ground and establish a stronger US presence, the team fostered relationships with high-profile partners such as Walmart, Pepsi, ICEE, and Sysco. Through these partnerships, Acosta-Rubio has been able to introduce their products to new markets and thereby increase brand awareness. In 2013, they opened six Florida locations in partnership with Walmart Supercenters (Pembroke Pines, Coral Springs, Plant City, Hialeah, and most recently, Kissimmee and Tampa). Churromania’s partners have helped streamline the company’s supply process with their nationwide distribution footprint. In these ways, Acosta-Rubio was able to fortify the product with great partnerships. Those partnerships have allowed the brand to expand greatly and in a way that allows it to stay authentic to the product.

Stories like those of the Friday morning regulars make Acosta-Rubio passionate about the company. He loves Churromania because it brings joy to children and adults alike who crave the nostalgic taste of a sweet churro, and the company continues to pursue goals that are aligned with what they represent as a successful, Hispanic-owned franchise.

Gilda Perez-Alvarado Is a Woman of the World