“I never walked in the office or the boardroom with any baggage about being a Latina in a field populated by white men. You observe, you listen, you sharpen your skills, you do the work, and you gain the respect of others.”

Maritza Montiel says she loves using sports analogies because they “perfectly illustrate” many leadership points. So, taking a page from Montiel’s book: the deputy CEO and vice chairman’s career, spanning 40 years with Deloitte, has been a slam dunk, a home run, a touchdown, a—you get the picture.

Montiel was hired by Deloitte in 1973, right after she graduated from college as the only female accounting major in her class. At the time, very few women were in the field, and Latinas were just about nonexistent in accounting. All of these years later, Montiel still laughs at the circumstances surrounding her hire by the Big Four professional services firm (Deloitte has the largest professional services network in the world). In the days “before the Internet,” firms would visit college campuses to recruit prospective employees. When Deloitte visited her campus and expressed an interest in Montiel, an interview date was set. However, Montiel completely forgot about the interview, and was only reminded of it when she received a call from Deloitte at her home asking where she was.

Have a relentless commitment
to a goal.
You must commit to your vision
and learn to love risk.

In the end, the firm arranged for her to interview at its offices and, though she was interviewing with several other firms, she chose Deloitte. Despite her initial misstep, Deloitte was more than happy to have her as well. “There was just something about the firm,” Montiel says. “It felt like it was meant to be.”

Montiel didn’t always envision a career in finance. Throughout her adolescence, she dreamt of being a surgeon. “Somewhere there are pictures of me as a kid wearing a nursing outfit, and I’m sure I was pouting, because I always wanted to know why I couldn’t wear the doctor’s outfit,” Montiel says. Taking care of people was her passion, but when her father passed away when she was 17 years old, paying for medical school was out of the question, and she instead opted for accounting. “Math came easy to me and accounting seemed very safe; accountants are always in need,” Montiel says. “I’ve always been a very practical person, but I know I made the right decision. Accounting wasn’t my passion initially, but it became my passion.”

Very few people can say they’ve spent their entire career at just one company. For Montiel, spending 40 years at Deloitte has been anything but routine, thanks in part to the firm’s willingness to provide employees with wide-ranging opportunities that enable them to learn different skills to grow both personally and professionally. Montiel’s initial focus was auditing, but early on in her career with Deloitte she was asked to do consulting. It was these new, challenging assignments that gave her the skills she needed to move up the ladder.

“I loved challenging assignments; I still do,” Montiel says. “Anything that was new and intimidating interested me, and it’s where I thrived. The firm gave me the opportunity to do so many different things. If they hadn’t, I would have left the field, because I wouldn’t have felt challenged. I’ve done so many drastically different things that the only connection is that I was doing it all for Deloitte. It’s been amazing to spend 40 years at a single company and feel like you’ve had a dozen different careers.”

Montiel’s time at Deloitte can only be characterized as trailblazing. She was made partner at a time when only five women in the history of the firm had been partner, and was the first ever Latina. “I broke through the glass ceiling as a double minority,” Montiel proudly says. The deputy CEO was also the first Latina on Deloitte’s US board of directors. All of these firsts are one part of the legacy Montiel leaves behind when she retires later this year, taking a place next to countless groundbreaking career milestones and endless words of wisdom. 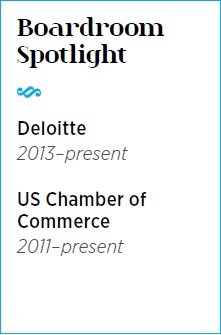 “I believe I had a seat at the table because I’m equal,” Montiel says. “I never walked in the office or the boardroom with any baggage about being a Latina in a field populated by white men. You observe, you listen, you sharpen your skills, you do the work, and you gain the respect of others. It wasn’t always like that in the old days, but inclusion has always been very important to Deloitte; it’s what makes us different. I knew I belonged and that gave me the courage to speak up. That’s how you get noticed. You can’t be insecure about who you are. You gain acceptance by being yourself and bringing everything that’s unique about you—everything that makes you an asset—to the table. Once you have a seat, it is your responsibility to be authentic, to be yourself, and to provide all of the benefits that go along with that.”

By all accounts, Deloitte is very committed to inclusion. Last year, for the seventh consecutive year, Working Mother magazine named Deloitte one of the top 10 employers in the United States for multicultural women. The ranking recognizes 25 US organizations based on representation, hiring, attrition and promotion rates, recruitment, retention and advancement, and company culture.

Montiel has also served on a number of boards during her time with Deloitte, including those for United Way and Goodwill Industries. Community service, she says, is “critically important,” as it enriches your life and the lives of others. “I joined boards to make a difference,” Montiel says—and she has, especially in a way she finds incredibly meaningful. “Latinas very rarely get to the levels I have reached and very few serve on boards. The advancement of Latinos is inevitable as our country’s demographics shift, but Latinos are still painted with a very stereotypical brush. I want to see these stereotypes change, and I believe I’m helping to change them. I want the misconceptions about Latinos to be corrected and that is slowly happening because of our hard work.”

When Montiel retires from Deloitte, she’s doing just that: only retiring from Deloitte. She has every intention of continuing her work elsewhere, and that includes serving on public boards and writing an internal book for Deloitte about the great women leaders of Deloitte. Specifically, she’s interviewed 40 of the firm’s female leaders, past and present, with the goal of exploring “self-leadership.”

“There are so many books on leadership, and they all dispense the same advice to women: learn to network, get a mentor, etc.,” Montiel says. “What I’m writing about—and what I want women to understand—is that they have the self power of leadership within them. It’s not something that has to be taught to them; it’s not a role they need to ask for; it lies within them. It’s just a matter of understanding how to access their power of leadership, of understanding the steps you need to take. You have to take your foot off first base if you’re ever going to steal second.”

Dolores Kunda Will Not Ignore the Facts