“It can be hard to make it to the boardroom if you were raised in a situation where business was not dinner table conversation.”

When Dolores Kunda started at Leo Burnett in 1984, no one at the company knew she spoke Spanish. One day, her phone rang. An account director was on the other line, calling because he had received an internal questionnaire on which Kunda listed her fluency. Weeks later, she was in Mexico City starting work on an account for Kellogg Company.

And now, 30 years hence, Kunda is president and CEO of Lapiz, an independently operated multicultural ad agency fully owned by Leo Burnett Worldwide. She’s widely respected as a pioneer in the industry and has been sought out to serve in high-profile business positions. As a member of the board of directors at Finish Line, Kunda is one of just a few Hispanic women who fill a seat in American’s boardrooms. 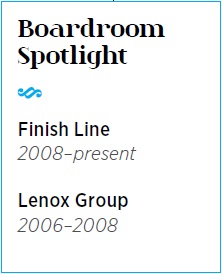 Three years in Mexico left Kunda feeling unsatisfied with the state of Hispanic marketing. When she returned to the United States, Leo Burnett had started a Hispanic unit, but it was primarily a service group attached to major accounts that, for the most part, translated English copy. Kunda took charge of the unit and lobbied management to invest more heavily into its Spanish-language work. Although she had convincing statistics, flashy presentations, and sound financial proof that marketing to Hispanics would pay off for the agency and its clients, she had to persevere. Finally, in 1999, Leo Burnett said yes. Lapiz was born.

What started with just 5 employees now has 65 and is recognized as one of the oldest Hispanic ad agencies in the United States. Instead of copying English-language ads, Kunda and her team set out to truly market to Hispanics in a targeted and culturally relevant way. “If you market a product for kids without talking to the Hispanic market, your product will not be a success,” she says. “You can’t ignore the facts.” Lapiz became a successful entity within Leo Burnett because embracing the buying power of a growing Hispanic demographic became a good business decision.

Now that companies have finally embraced her approach, things are starting to shift again. Kunda says that millennials—people born between 1980 and 2000—are the first color-blind and culture-blind generation. “We’ve started doing advertising work based on behavioral thinking instead of strict ethnicity,” she explains. Ads for Gain detergent, for example, focus on fragrance to attract Latino and African American markets driven more by scent when it comes to a signal for clean laundry. Since English- and Spanish-speaking cultures both love the Olympics, Lapiz ran identical ads in many markets.

For some campaigns, though, cultural edits remain important. For English-speaking markets, Leo Burnett created the popular Allstate “Mayhem” campaign, which depicts a human character who personifies disaster. As of 2011, he was the third most recognizable advertising character. For the Spanish-speaking markets, Kunda’s team turned Mayhem into “Mala Suerte.” Mr. “Bad Luck” taps into the Hispanic concept of fatalism and, according to Kunda, “marries what Allstate has to offer with the idea of how accidents happen in the Latino community.”

Kunda’s accomplishments have attracted corporate executives looking to fill boardroom seats. Ten years ago, she served on the board of Lenox Group and had to preside over a bankruptcy. The company is still in existence thanks to the efforts of Kunda and her fellow board members, who found a purchaser and preserved many jobs.

For Finish Line, Kunda advises on matters related to the Hispanic market but also offers her expertise in other areas. “Once you are on the board of a publicly traded company, you are expected to use your business knowledge and savvy to contribute in all areas,” she says. Kunda serves on the governance committee and the compensation committee, where she helps set the payment and goals of named executive officers.

In doing the work, Kunda is keenly aware of what she calls a “responsibility to represent Hispanics and women well.” Cultural change in corporate America happens in the boardroom, and she knows she has a chance to spark real change. When the board considers a new member, Kunda is careful to raise important questions and encourage diversity and inclusion. “I think it’s crucial that we widen the net to consider members who may not have served on another board,” she says. While experience is important, Kunda believes it’s also important that companies reflect the general population and open their doors to people who can bring insight to a specific board, but might not be the first or most obvious choice. “It can be hard to make it to the boardroom if you were raised in a situation where business was not dinner table conversation,” Kunda says. “I want to be the voice that says let’s consider someone even if they aren’t a retired CEO already serving on multiple boards.”

Kunda says she’s trying to help other women by serving in groups like Viva­Women!, a networking and educational group designed to help women navigate personal and professional obstacles. “Young women look at me as a Latina and are impressed at what I have done, but they need to understand what it takes, and they need someone to tell them that they can do it too,” she says. She advises aspiring board members to be purposeful in their endeavor and to seek out educational opportunities that will strategically prepare them for a potential board seat. And to sum up her point, Kunda quotes Napoleon Hill: “A goal is a dream with a deadline.”

Editor’s Note: At time of press,  editors were informed Dolores Kunda would step down as Lapiz’s president and CEO on Dec. 31, 2013. Kunda told HE she plans to continue her board work with Finish Line as well as pursue other endeavors. “I’m not sitting around planning to ‘retire,’” Kunda says. “I’m launching into the next phase.”