Over the course of her career, Maria Rivera has climbed from a dishwasher role to the C-suite. Now, she’s helping Krispy Kreme to aim just as high. 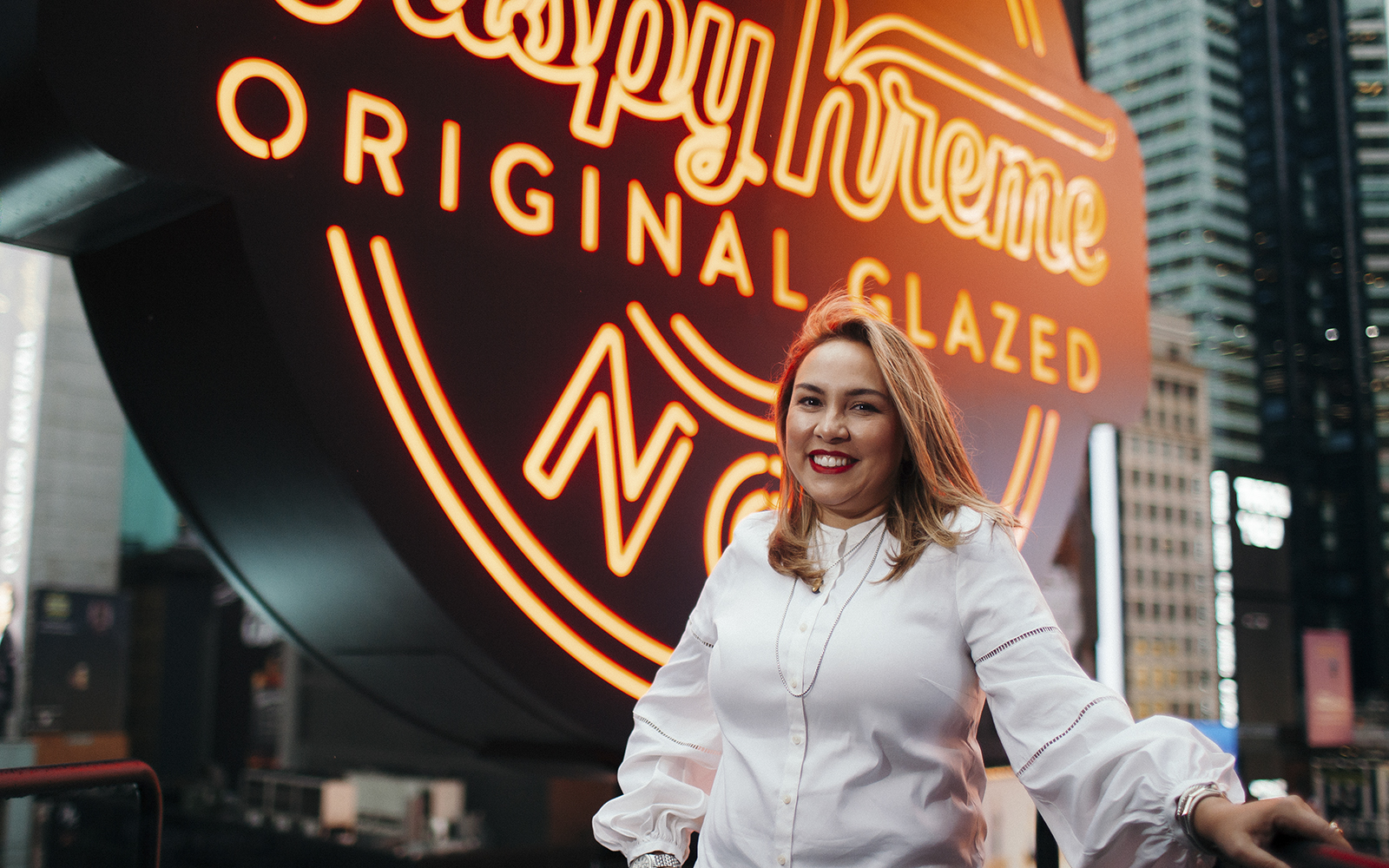 Over the past twenty-five years, Maria Rivera has held just about every position possible in the food services industry. As a Hispanic woman in a space long dominated by men, she’s had an equally wide range of experiences in her various roles—both good and bad.

“I have gone through it all, including being harassed, bullied, and made to feel true inequality in the workplace,” Rivera says. “But I have also been incredibly fortunate. I have had so many career mentors and leaders take an active interest in me. They have supported me through the years, believed in my platform, and seen me for me.”

Through hard work and dedication, and with plenty of support from her mentors, Rivera has climbed to the top. She now serves as chief operating officer for the United States and Canada at Krispy Kreme, a historic doughnut brand currently undergoing an equally historic revitalization in which Rivera has a major role to play. She has made it her mission to help the company reach its full potential––by breaking into new markets, expanding operations, and, most recently, going public.

Rivera first entered food service after moving to the mainland US from Puerto Rico as a twenty-four-year-old single mother. She took a dishwasher job at Walt Disney World, then worked her way up within the resort organization. “To come from an island and plant yourself in diaspora––you choose to leave your country, your relationships, and your parents to pursue the American dream,” she says. “I started at Disney as an hourly team member and left as an area manager, which is the equivalent of a director of food and beverage.”

In 2004, Rivera left Disney to manage hotel food and beverage services at Hilton properties in the Caribbean. She later branched out into the gaming industry through a stint at Caesars Entertainment before landing squarely in the restaurant space as managing director and regional vice president of operations at the Darden family of brands.

While learning the ins and outs of restaurant operations at Darden brands like Olive Garden as well as at other companies like TGI Fridays, Rivera developed a specialization in turnaround, operations restructuring, and transactional activity. “I gravitate toward brands that need to go through both a financial transformation and a people transformation. I like to take things apart and rebuild them,” she says.

Her skills caught the attention of Krispy Kreme in 2016. By that point, Rivera was well aware of the impact her identity had on her professional life. “I did not express publicly that I was Hispanic at the beginning my career. I never talked about my gender, my diversity, or my experiences as a woman of color,” she explains. “You try to compartmentalize, but it certainly shapes you to walk into a room as a vice president and have a colleague turn to you and say, ‘Honey, can you please get me coffee?’”

Rivera adds, however, that she’s not a victim in any way. “As a minority, you have a choice to make,” she says. “I’ve been underestimated a lot. I’ve had to work twice as hard as my male colleagues in order to be taken seriously. That’s a challenge, but it’s also an opportunity.” In Rivera’s case, she took the opportunity to advance her career by being incredibly disciplined, earning a bachelor’s degree and two master’s degrees while also raising a son completely on her own.

Today, Rivera believes in calling out biases when she sees them and bringing her whole self to the table. In that sense, she has found her perfect match in Krispy Kreme. “Krispy Kreme has afforded me the opportunity to lead in a way that’s as true to myself as possible,” she says. “I can be incredibly authentic here, and I have been able to leverage being very entrepreneurial in order to build up this brand, helping it achieve its full potential.”

That potential, and its leadership, is what attracted Rivera to the company in the first place. “I wanted to take this eighty-plus-year-old brand, which is absolutely beloved, and reintroduce it to a new generation of people,” she says. “We’re expanding into markets where we’ve had no presence, or no presence in over a decade. Looking at New York City, we launched an entire market in the middle of a pandemic and opened a global flagship in Times Square. We also opened a doughnut factory that services over 125 points of access in New York alone. To be able to offer over five hundred new jobs at a time where the world had shut down was incredibly rewarding.”

Besides establishing the new flagship location in New York’s Times Square, Rivera has guided Krispy Kreme through a delivery model transformation that revolves around making doughnuts fresh seven days a week. They’ve doubled the size of their business, opening twenty-eight new shops last year and expanding their points of access to every Walmart in the US.

That growth paved the way for Krispy Kreme to go public in 2021. But for Rivera, there’s more to the story. “We’re not just a collection of doughnut shops,” she explains. “There’s this interaction between the doughnut maker and the doughnut consumer: we are giving you a little bit of our heart. Part of why we resonate with people is because we do so much good. We gave away over thirty million doughnuts to the community last year. People love our warm spirit, our generosity, and the way we think about giving back.”

The company’s spirit certainly resonates with Rivera, who identifies her impact on other people as her most important contribution at Krispy Kreme. “Inside the four walls of our shops we can learn the most, listen the most, and effect the most change with our people,” she says. “If I can inspire and change someone’s life along the way, that is my best work.”

Rivera, who spends two days a week visiting Krispy Kreme shops around the country, challenges her team members to keep striving for more––just as her own mentors pushed her to do throughout her career. As she looks to the future, Rivera hopes to challenge the industry at large to strive for more as well. “When I think about my own dreams and goals, not only for the organization but also for myself, most of them have to do with giving back and really driving diversity and inclusion efforts across the food services industry,” she says.

Even as she crafts a legacy to leave behind, Rivera can’t imagine stepping away just yet. “I often say that the day I don’t love what I do, I’m going to retire,” she jokes. “But I don’t see that happening any time soon.”