Jadira Gurulé didn’t see people like her represented in science fiction growing up, so she dismissed the genre as “not for her.” Today, she has a different outlook on the matter. As curator for the National Hispanic Cultural Center (NHCC) in Albuquerque, New Mexico, she’s become an advocate for future-oriented art that centers Black, Indigenous, and other people of color.

You can see her hand at work with Fronteras del Futuro: Art in New Mexico and Beyond: the exhibit, which runs through January 8, 2023, is largely influenced by her own personal journey exploring racial, cultural, and gender identity—including how it relates to a career in the art world.

“My interest in science fiction developed later than many people who engage with that kind of subject matter,” Gurulé says. “There’s very little representation of women of color. It didn’t represent me and I moved on. It wasn’t until grad school, when I took a class on race and speculative fiction, that I was blown away by all the things I had been missing.”

Gurulé’s career, like her interest in sci-fi, isn’t linear. She attended the University of New Mexico, where she bopped around various departments before landing on art history as a major. In exploring what possible professional paths she could take, she began to volunteer as a docent at NHCC in 2008.

Although she was a native of Albuquerque, Gurulé had never visited the cultural center before her college years. “I remember walking in and being like, ‘Wow, I can’t believe I didn’t even know [all of this] existed,’” she reminisces. “It had this very powerful impact on me as a really unique space. NHCC is very multidisciplinary—there’s performance arts, history, and literary arts. I was in awe of the offerings of this place, and that really helped me come to understand my own identity.”

But Gurulé wasn’t ready to build a full-time career at NHCC. “I wasn’t quite sure if I was going to continue on with a PhD or pursue academia or what kind of path I wanted to take,” she says. “So I ended up waiting tables again.”

Gurulé decided to pursue a master’s degree at the University of New Mexico, and her curiosity led to a newfound appreciation and admiration for sci-fi. Her degree in American studies focused on visual and popular culture with an emphasis on race, gender, and sexuality—topics that continue to inform her work in the arts. During this time, she began to intern in the visual arts program under Dr. Tey Marianna Nunn, NHCC’s former art museum and visual arts program director.

“That experience was one that I just can’t overstate my gratitude for,” Gurulé says. “It was an opportunity to not only learn more of the inner workings of the museum but also to dig into the content of Hispanic and Latino art in more depth.”

Gurulé says there was a special sense of rarity, working in an art environment where women and people of color filled leadership roles. Alongside Executive Director Dr. Margie Huerta and Artistic Director Noël Bella Merriam, Gurulé is one of three women of color today who hold leadership roles at the NHCC.

Gurulé and her colleagues are determined to showcase the nuances of Hispanic culture as well as the complex history of New Mexico itself through their work at NHCC. “New Mexico has experienced multiple colonial forces, both through the Spanish and the United States,” she explains. “It’s gone through multiple identities. There are different sci-fi writers and scholars that theorize around the idea of colonization as an apocalyptic moment in and of itself.”

It’s with this in mind that Gurulé conceived Fronteras del Futuro in 2020, which finally came to life this year. But this is not her first foray into the space. In 2016, she curated Fantasía Fantástica: Imaginative Spaces and Other-Worldly Collage, followed by Because It’s Time: Unraveling Race and Place in NM in 2018. The latter exhibit features a photo of Ed Lee Natay, the first Native American musician to record and release a commercial album (Natay, Navajo Singer) alongside another man. The two are dressed in Star Trek-esque attire. Natay’s image is from 1959, taken when he was listening to his own album. On the left is the exhibit’s artist—Ed Lee’s grandson Ehren Kee Natay. The younger Natay superimposed himself into a past that also represents his future.

This image greets guests when they enter Fronteras del Futuro, a decision Hyperallergic describes as “a smart curatorial choice to offer this work as introduction; themes of lost and found, assailed and protected cultural identity continue throughout the show.”

Through her own journey of self-discovery, Gurulé is proving to be someone who questions her place in the world and creates space for others to do the same. The same way of doing things isn’t going to work for Gurulé—and that’s a good thing.

“These amazing BIPOC artists were not just replicating tropes within science fiction for the sake of a fun, fantasy world,” Gurulé says. “They’re using these tropes to investigate and critique the past and the present. They’re doing the important work of formulating options that we might consider for the future, and holding a place for people of color in the future.” 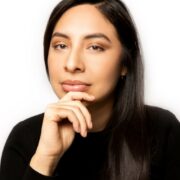