As the United States prepares for the upcoming and much-anticipated shift to the 5G network, major cities are revamping parts of their infrastructure to accommodate the increase in capacity.

Crafting the blueprint for such an endeavor can be daunting. That’s where Rudy Reyes, the vice president and associate general counsel of the western region at Verizon, and his team come in. For example, Reyes’s Verizon team worked hand-in-hand with Mayor Darrell Steinberg and the Sacramento City Council to determine what residents needed and how they could go about paving the way for 5G.

“We were true partners in every way,” Reyes says.

With early cellphone technology, the devices used large towers. These towers, however, won’t work for the 5G network; the upgrade requires smaller, more sophisticated cells—and lots of them. So, the City of Sacramento and Reyes’s team faced the challenge of installing these cells at a cost-effective rate.

Nonetheless, Mayor Steinberg set an aggressive schedule, Reyes says. But because city officials and Reyes’s team worked to streamline permits and remove barriers, they were able to meet the deadlines, and workers are ready to install these small cells on light poles throughout the city. Now, Sacramento is set be one of the first cities to have 5G because of the work Reyes and his team put in.

The upgrade will spark a revolution in how Sacramento residents work and connect, Reyes says.

“It’s a game-changer,” Reyes says. “It’s the next generation of wireless connectivity.”

The three key things 5G will have are: increased speed, increased capacity, and decreased latency, Reyes says. The increase in speed and capacity are necessary partly because so many people have multiple devices connected to the internet at any one time. But Reyes says the upgrade can help more people connect to the information they need faster.

“We had a higher purpose,” Reyes says. “We put the citizens first.” 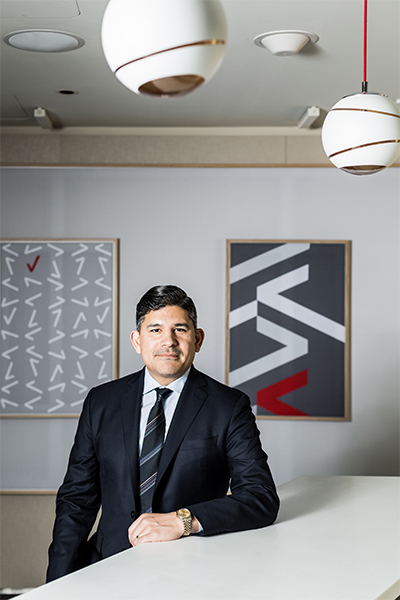 Serving a higher purpose is something that Reyes has always pursued. When he was a child, Reyes wanted to be either a priest or police officer. However, he found the law. Growing up, Reyes says he watched a lot of court-themed TV shows, such as The People’s Court, which left an impression. “I was impressed by how both sides presented a case,” he says.

Early on in his law career, Reyes worked at several law firms and specialized in litigation. Dealing with litigation—in particular, cases where people acted improperly—adversely affected Reyes. “It wore me down,” he says.

Instead of litigation, Reyes wanted to use his legal acumen for something that was more future-focused. So, he applied for a job at Verizon at a time where cellphones were just becoming ubiquitous. “I about fell out of my chair when Verizon made the offer to me,” he says.

Now, after fifteen years with the company, Reyes is still excited by the work he’s doing to develop the future of telecommunications infrastructure—if only because he has seen so much change over his career.

When Reyes joined Verizon in 2003, the landscape of technology and telecommunications was wildly different than it is today. Connectivity was only at 3G, cellphones looked like bricks compared to the sleek smartphones of today, and YouTube didn’t even exist yet.

With 3G connectivity, cellphones could call, text, and connect to social media in a very basic way. Then the industry expanded under 4G, and broadband speeds increased as did overall connectivity. The cloud began to develop as well.

Reyes explains it like this: Under 3G, you could navigate with your phone, but because the networks weren’t as quick, you would miss your turn. With 4G, you’d receive the turn direction just in time. And with 5G, not only would you have more than enough time to make your turn, but the technology will support fleets of driverless vehicles that can operate autonomously.

This shift is also how we went from games like Tetris just ten years ago to more sophisticated ones like Candy Crush Saga.

Anticipating the 5G upgrade change means many cities will have to create the infrastructure for it. And like his work with the City of Sacramento, that’s exactly the type of challenge that excites Reyes.

Reyes might not be the only one excited by that type work. He says that his seven-year-old son told him that when he grows up, he wants to create 6G.

“I have no idea where he got that from,” Reyes says with a laugh.

Ray Lugo Knows That Space Could Use a Manager