Eddie Moreno has grown alongside Cardinal Group Management, building the teams and the platforms needed to take the real estate management firm to new heights 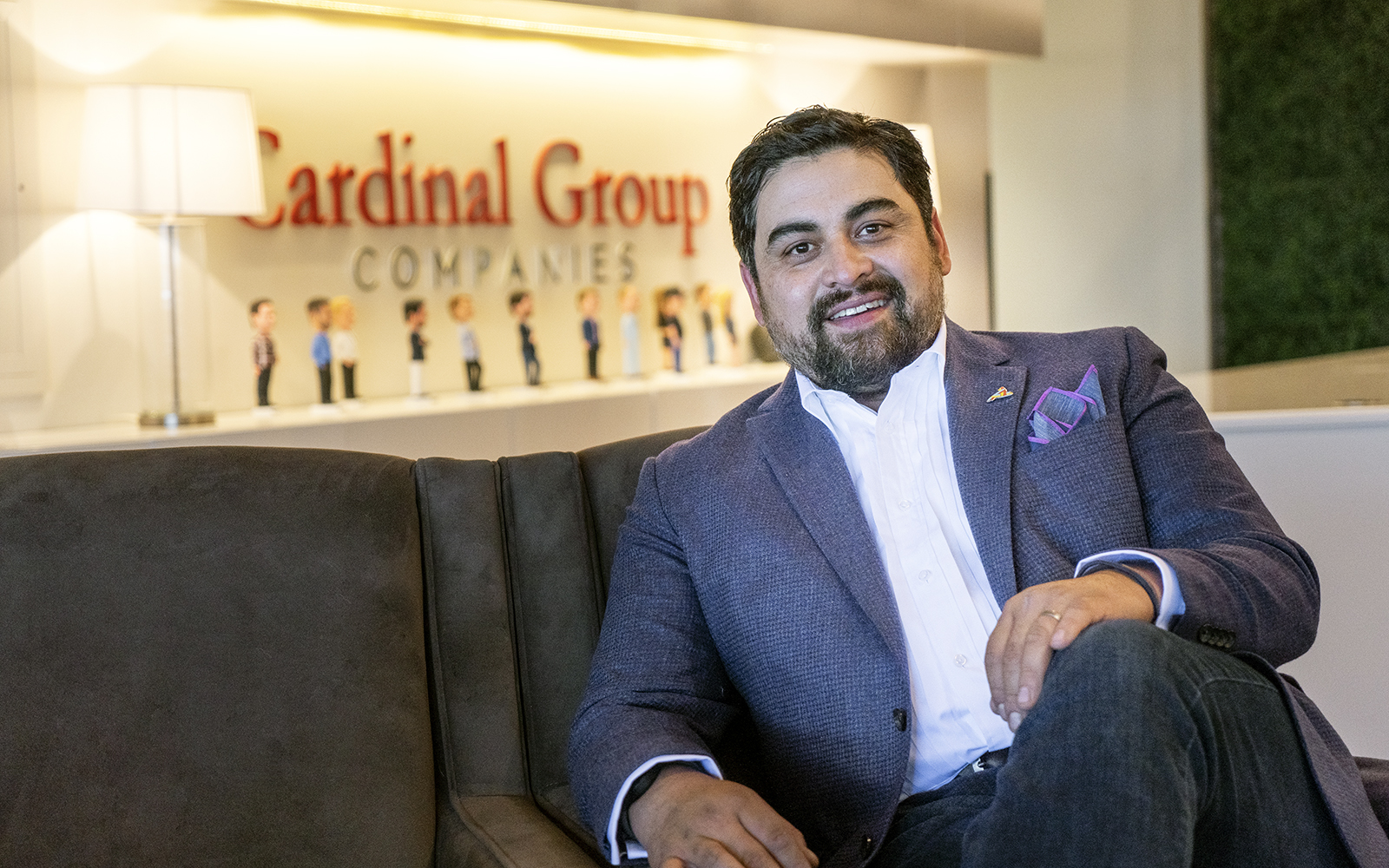 Like most young people, Eddie Moreno had a few side gigs during college. He served coffee, worked at a package and shipping store, and sold water outside music venues. But then Moreno found a job he knew he could turn into a career. During his sophomore year in college, the business and finance major landed his first leasing agent position in the multifamily industry thanks to a close family friend. Soon, he moved to a team that specialized in lease-ups in the Austin, Texas, area. By the time he graduated, he was managing the lease-up of a new luxury apartment community.

The job was a natural fit for Moreno, who grew up around the industry. He attended high school in El Paso, Texas, and earned extra income by entering data into spreadsheets for a family friend who owned a management and investment business. The early experience sparked Moreno’s interest and opened his eyes to a career in the multifamily industry.

Upon graduation from the University of Texas at Austin, Moreno took a job as a professional services associate at a start-up when the company had only ten other corporate employees. He spent the first seven years of his career there, learning all aspects of the student housing business. In just a few years, Moreno had developed new skills and expertise, and the company had grown to become a national player with more than twenty-five thousand student housing beds nationwide.

Although Moreno was flourishing, learning about operations, business development, financial analysis, and management systems, the global financial crisis of 2008 hit his company and its industry hard. The company reduced its business development team by more than two-thirds, and since Moreno was one of the few remaining employees with operational experience, he was sent back to an on-site management position.

We’ve been fortunate to attract and develop the best people, given them the resources and tech they need to excel at their jobs, and connected them to fulfilling work.”

While others might have been discouraged by what appeared to be a demotion, Moreno refused to shrink from the challenge. As he worked to save the properties he managed from going back to the bank—a formative exercise in his development as an operator and leader—the words of a mentor echoed in his mind. “Let your curiosities be the strength of who you are as an individual and a leader,” he repeated to himself.

Very few people in the industry understood every single part of the business like Moreno did. He had done financial modeling, new leases, marketing, sales, training, operating systems management, and even facilities. During the recession, these skills all came together as Moreno learned to operate communities in challenging markets. By accepting the assignment, and by successfully repositioning distressed assets in a tough market, he earned the opportunity to interface with brokers and buyers, including Jason Luker, the CFO and a founding partner of a company called Cardinal Group.

When Moreno joined in 2013, Cardinal Group had just opened its Denver headquarters and was a small owner-operator. He became the company’s first portfolio manager and has grown alongside it. Moreno progressed from director of operations to vice president of operations to his current position as executive vice president of operations. In 2018, Moreno became a partner in the business and has since helped conceive and launch other businesses and products within the Cardinal Group family of companies. Today, the vertically integrated company is a real estate investment, construction, development, marketing, and management firm with more than two thousand employees and forty thousand units in thirty-seven states.

Cardinal started with the purchase of one single-family home nearly twenty years ago and has now become one of the country’s top fifty multifamily operators and the second-largest privately held operator of student housing in the country. Along the way, its leaders have asked Moreno to build the team and the platform necessary to accommodate the growth of its property management business. He did that by investing in people. “We always lead with culture and our core values,” he says. “We’ve been fortunate to attract and develop the best people, given them the resources and tech they need to excel at their jobs, and connected them to fulfilling work.”

Cardinal’s culture is centered on its team, the creation of growth opportunities, a commitment to DEI, a focus on health and wellness, good ideas, fun team events, and great company benefits. Employees enjoy competitive salaries, generous vacation policies, tuition reimbursement, and the option to work from home. Because Cardinal’s leaders value work/life balance, the company has a 7 p.m. to 7 a.m. email blackout period. Junteenth, MLK Day, and Voting Day are all paid holidays. Moreno chairs the diversity, equity, and inclusion committee, and served on the National Apartment Association’s inaugural DEI Council.

For Moreno, it’s all about the long game. “We are very purposeful about leadership development, and we’ve had huge success promoting from within. Our current team members are the future leaders of our organization and will take us where we want to go,” he explains.

In leading his own teams, Moreno focuses on transparency, inclusivity, agency, and teamwork. “Everyone should trust your intentions, despite inevitable mistakes as a leader, and everyone should have a voice,” he says.

Moreno also focuses on connectedness and seeing how the disparate parts of the business and its teams can come together to achieve great things or overcome impossible odds. This has come in handy during the many challenges Moreno has faced as a leader, from growing the business to critical mass to be able to afford investments in Cardinal’s personnel and platform to scaling the business while maintaining product quality and performance. Of course, he’s also managed through the pandemic and has ultimately seen the business through to a point of financial stabilization.

Cardinal Group Management has doubled in size every two years for the past eight years. Moreno says the credit goes to strong leaders who have set a clear vision and a dedicated team that’s worked tirelessly to execute the plan. “We’re doing something special,” he says. “And we’re doing it together.”

Angie Valdes Knows That It Takes a Village to Build One