With 30 years at ComEd, Fidel Marquez has tackled a slew of roles, always getting results

Thirty years ago, Fidel Marquez started out at ComEd, a northern Illinois utility and energy delivery company, as a summer intern while obtaining his degree in engineering. Today he serves as the senior vice president of governmental and external affairs. Along his journey, Marquez has completed two graduate degrees and served in various roles across the company, from a technician at a nuclear energy plant to working in the HR department. Here he shares just a few of the impactful initiatives he’s helped lead, and how these projects have shaped the progress of the company.

Mapping the Future
In 1995, Marquez headed the project that literally put ComEd on the map. “For a hundred years, we’d used paper maps to work from—it was time to transition to our first geographic information system,” he says. The project involved digitizing all the company’s service-area maps, allowing for easier and more efficient design, construction, and maintenance of company infrastructures. “Since that time, technology has certainly continued to improve, and our system has continued to evolve, but I am proud to say the underlying system I helped implement is still in place,” Marquez adds.

Negotiating Cultural Differences
In 2000, ComEd and PECO, an electric and natural gas provider for the greater Philadelphia area, decided to merge, with Marquez leading the integration team. “The merger focused on growing the two company’s capacities to generate electricity,” he says. “The desire was to create an efficient new operating model, making us a large yet efficient player in both markets.”

Unfortunately, Marquez found that merging two companies with such long-standing business histories proved to be a challenge. “Cultural differences hindered our path of a successful merger,” he says. “We quickly found that no matter how solid your business strategies, if you don’t address the cultural differences, they simply will not work.” With persistence, Marquez and his team broke through the barriers and created a new identity for the companies while respecting the past. “Now the merger is recognized as one of the most successful mergers of its kind,” Marquez adds. “We are recently merged with Constellation, an energy company in Maryland, and are taking the lessons learned from PECO and applying [them] to this project.”

Swaying Public Opinion
As a provider of energy for the metropolitan Chicago area, ComEd found its footing with the city suffering in the early 2000s. Enter Marquez, who was assigned to improve the company’s relationship with the city. “I had actually left ComEd for a few years to work for the municipal electric and gas utility in San Antonio, so when I returned to the company in 2003, I brought this new experience with me,” he says. Marquez also brought his engineering and operations background to the table, rather than a more traditional public/community-relations slant. “I feel my background gave me credibility with the city and helped me build a collaborative relationship,” he says. “Though it took time to rebuild the relationship, we showed ComEd was committed to providing a greater level of service and delivering it.” 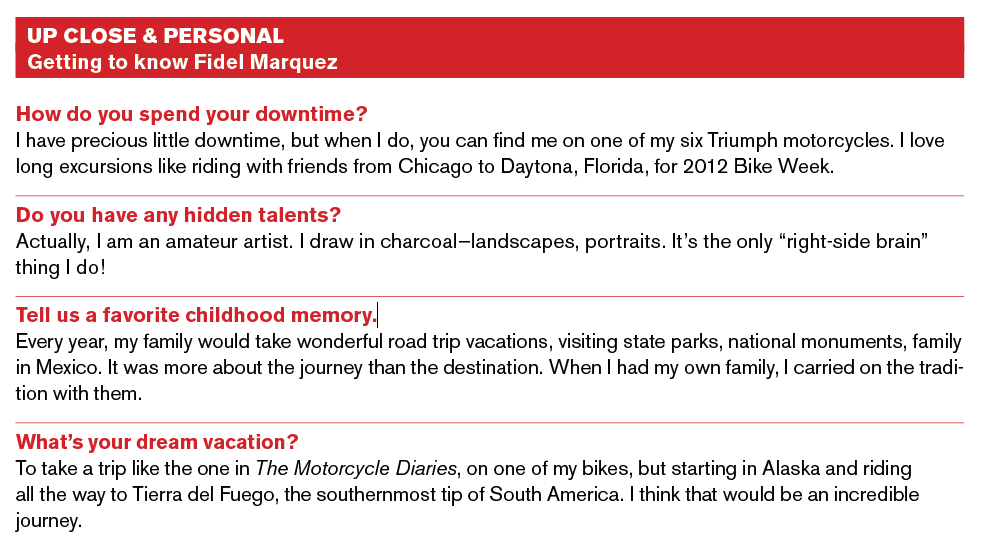 Technology Overhaul
In 2009, Marquez was assigned to ComEd’s customer-service division. In the process of evaluating the division’s operations, he discovered the company’s approach to customer contact had not kept up with the times. “The only way customers could contact us was via phone,” he says. “So, we started looking at how customers wanted to interact with us, and how they interacted with our competitors.” As a result, ComEd revamped its website to provide more self-service channels for customers including online bill pay and service requests.

Marquez then turned his attention to social media, launching a Facebook page and Twitter presence where customers can interact with ComEd’s social-media team. The company also launched mobile apps in May 2012, and developed a two-way texting protocol which provides immediate response and updates as requested by the customer. “Now our customers can choose the communication channel of their preference at the time of their preference,” Marquez says. “As a result, we’ve seen growth in the number of transactions in self-service and in customer satisfaction.”