Some people are born with innate abilities that distinguish them from the pack. For Miguel A. Zaldivar Jr., his natural talent was conflict resolution. Zaldivar, who grew up in Venezuela with a father who was a lawyer and judge in Cuba, a grandfather who was a Supreme Court justice, and a great-grandfather who was also a judge, recalls one incident when he was 16 years old that foreshadowed his legal prowess. “A friend of mine was being privately tutored and he wanted to cancel his upcoming sessions,” Zaldivar says. “He enlisted my help to call the tutor and convince them to cancel the future sessions without making my friend pay for them—and it worked.” Despite all the signs, Zaldivar initially majored in engineering while in college until one day it hit him: he wanted to be a lawyer. The rest, as they say, is history.

Zaldivar is currently the global cohead of Hogan Lovells’ infrastructure, project and public finance (IPPF) practice group where he concentrates on complex cross-border transactions, sometimes requiring that he become familiar with the legal systems, economic complexities, and political systems of three or more different countries all at once. This was the case when he helped facilitate a multibillion-dollar deal in which a Chinese state-owned bank wanted to provide financing for the development of a hydroelectric generation facility in Ecuador. Complicating matters further, the English legal system was used for the deal, though it resulted in the largest infrastructure deal in the history of Ecuador. Zaldivar routinely helps clients conduct deals of this magnitude, lending his highly specialized expertise. Of course, getting to this point in his career required that he push himself harder than most people ever could.

After completing his studies in Venezuela, Zaldivar was granted a Fulbright scholarship that enabled him to complete his master’s degree in international and comparative law in the United States. Zaldivar obtained his master’s and went on to work at two prestigious law firms in Washington, DC and Miami. Afterwards, as required by the terms of the scholarship, he returned to Venezuela and worked with his father at the Caracas office of one of the world’s largest law firms.

“In the United States, I learned from the best and the brightest and once back in Venezuela, my father taught me so much of what I know today, but I knew I wanted to be an international lawyer and I didn’t want there to be a misconception that any success I experienced was because I was my father’s son.”

Zaldivar began to think about potential opportunities elsewhere. Soon enough, he was offered a position at a Miami law firm and he instinctively accepted, giving his resignation to his father that same day. What followed was the most challenging time of Zaldivar’s life. Florida requires a degree from the United States in order to practice law in the state, so despite practicing law for years at this point, Zaldivar found himself back in law school. At the same time, he was also working, trying to build his client base, attempting to perfect the English language, and his wife, who had been his best friend in law school, was pregnant with their first child.

“It was the most difficult time in my life, but I had no choice but to make it work,” he recalls. “I had many drivers to succeed: I resigned from my father’s firm, I had a baby on the way, and my residency depended on it.”

Zaldivar planned to stay in the country on an O visa, which is a visa available to foreign nationals who have “extraordinary ability in the sciences, arts, education, business, or athletics.” Only a few hundred of these visas are made available each year, so the pressure was on. 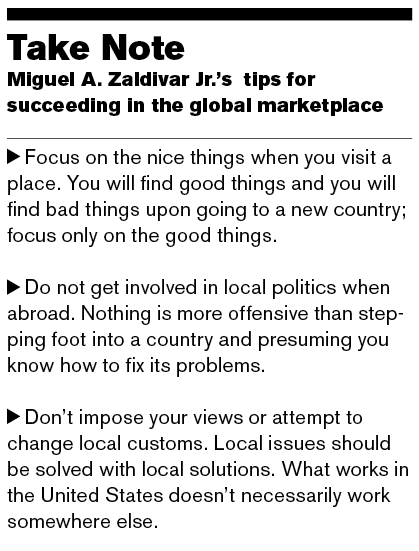 After years of hard work and dedication, the now global cohead of Hogan Lovells’ IPPF group currently enjoys unparalleled success on the job and expertly handles some of his market’s biggest challenges, which includes dealing with clients who want their extraordinarily complex and unique deals negotiated at lightning speed. “My success rate is very high, but these things take time. My clients often don’t realize that the market dictates the speed of the deal,” Zaldivar says.

Professional success isn’t enough for the Venezuelan native, however. Not only did Zaldivar teach law in Venezuela for two years, but for nine years now Zaldivar has been teaching at the University of Miami School of Law and donating his salary to a fund that enables young Hispanic students to attend law school.

“What I’ve learned from teaching is that I still have a lot to learn,” Zaldivar says. “I’ve also learned that I have a lot to give. I’ve been very blessed in my life and if I can give something back, it’s a privilege to do so.”