Growing up in São Paulo, Brazil, under a dictatorship, Vinicius da Costa felt from an early age that his opportunities would be limited. He wanted to enter an industry that ensured job stability, and because he had a knack for mathematics and problem solving, da Costa majored in information-technology science, a choice that would eventually take him from Brazil all the way to North Carolina. As director of IT portal, collaboration, and content-management solutions for Lowe’s Companies, Inc., da Costa brings 20 years of experience and international business know-how to a role, it seems, he was born to take on.

“Coming to the United States was challenging,” da Costa says. “I was first scheduled to come when September 11th happened, but I didn’t let it deter me. It was my plan in life to work in the United States. The first six months in the country were easier than I thought, but that’s only because you have so much to do and so much to learn. My wife and I eventually became used to the pace of things here, but I would say it took me five years to really decide that this is where we would stay. I sacrificed a lot and had to make big trade-offs in order to move here. But the scale of business in the [United States] and how much I could learn from it, along with the security and the education I was able to provide to my children, has made it worth it.”

Even though da Costa still finds himself longing for Brazil, there are constant reminders that he made the right decision by staying. Members of his 31-person team often tell him he’s the best manager they’ve ever had. The IT director credits his leadership skills to a former manager he had when he was first starting out in Brazil as a programmer. Simple advice turned into a life lesson he’s carried with him and passed on to others: even if mistakes aren’t visible to your client, you still have to do your job like someone is watching.

In fact, da Costa believes that he’s still learning, even after two decades of hard work and experience. He worked in the consumer industry for 20 years and has only been at Lowe’s, in the retail side of the industry, for seven months. Before da Costa had very little contact with consumers; now, he feels a sense of urgency because he understands that the solutions he develops directly affect the company and, by extension, its customers. 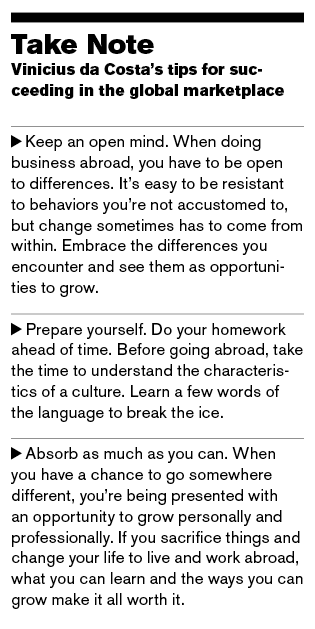 Part of da Costa’s goal is to make information more streamlined for company employees in the hopes of making them more productive and efficient in their everyday activities. This is where the director’s umbrella initiative comes in. The new internal social-business network, unified-employee portal, and content-management solutions will transform the knowledge sharing and social interactions of 150,000 users at both Lowe’s stores and the corporate headquarters through the use of wikis and microblogging. In simpler terms, the initiative will operate similar to Facebook, enabling employees to share knowledge across industries.

“This will give employees more knowledge, quicker access to knowledge, and better-developed knowledge,” da Costa says. “A corporation this large is very complex. There are thousands of people who know a lot, so the question became how can we connect all of the employees so that they can get the information they need when they need it. This will make everyone more productive.”

Despite his success, da Costa is still working to combat some deep-seated cultural differences. “As Latinos we’re taught to be very humble about our capabilities and our accomplishments, but in the United States I’m learning that you have to be more assertive,” he says. “If you’re coming here from another country, don’t be afraid of standing out because your education or life experiences are different from your coworkers. Make use of what makes you different.”