Javier Palomarez first heard of the United States Hispanic Chamber of Commerce (USHCC) while working at Sprint. Even as a young executive, Palomarez was able to grasp the intrinsic value of a large corporation partnering with small, Hispanic-owned businesses making major contributions to the US economy. At the time, he was simply trying to convince Sprint to become a corporate sponsor, little did he know that he would eventually become the USHCC’s president and CEO in 2009—dramatically increasing the reach and impact of the association thanks to his keen business sense, innovative vision, and relentless drive.

The USHCC takes a three-pronged approach to assisting the three million Hispanic-owned businesses whose interests it serves: by implementing national programs that assist the economic development of Hispanic firms, increasing business relationships between the corporate sector and Hispanic-owned businesses, and monitoring legislation and programs that affect the Hispanic business community.

A Hands-On President
Not content with just sitting behind a desk, Palomarez  tackles these formidable tasks by spending 95 percent of his time out of the office. His life is a series of plane rides and layovers, a seemingly never-ending stream of meetings with corporate sponsors, members of the association’s more than 200 chambers, small-business owners, and congressman. This is only part of the reason why the USHCC was able to increase its revenue by 100 percent and add more than 35 new corporate sponsors during one of the roughest economic climates in recent history.

The other half of the equation is Palomarez’s 20 years of experience with some of the nation’s leading corporations, including ING Financial Services, Allstate Insurance Corporation, and Sprint. He is the association’s first president and CEO to have a corporate background, giving him unique insight into how companies like Google, Visa, and Microsoft (all new corporate partners) should be approached and made to understand the many ways in which partnering with Hispanic-owned businesses could be mutually beneficial.

“The hardworking people we represent are as American as the day is long,” Palomarez says. “While we advocate for those who happen to be of Hispanic descent, we are an American association and these are American businesses. We want the US to recognize the value that Hispanic-owned businesses bring to this country. We’re not a civil rights organization; this is about business and economics. When corporations partner with us they’re not just ‘doing the right thing,’ they understand that Hispanics are generating billions of dollars and they’re the fastest-growing segment of the population. It just makes good business sense and we want the rest of the country to recognize that.”

Innovative Initiatives
Two to three times a week, Palomarez’s office receives a call, e-mail, card, or gift from a small-business owner thanking the CEO for making them aware of a program or initiative that made their revenue skyrocket or their clientele double. These successes have been hard-earned, as it took Palomarez some time to find his footing—now that he has it, however, it seems as if there’s no stopping him. In the past two years, the association has put more than 300 leaders through its Chamber Training Institute, an all-expenses-paid three-day training session at Notre Dame that teaches participants how to be better business leaders. But it was Palomarez’s green initiative that really broke new ground and garnered national media buzz.
The Green Builds Business Initiative is unlike anything the USHCC has ever done before. Not only does it educate Hispanic entrepreneurs on environmental sustainability, but it also teaches them how to reduce their business’ environmental footprint and operating costs and how to develop best practices for pricing, marketing, and branding green revenues, allowing them to become certified in the process. 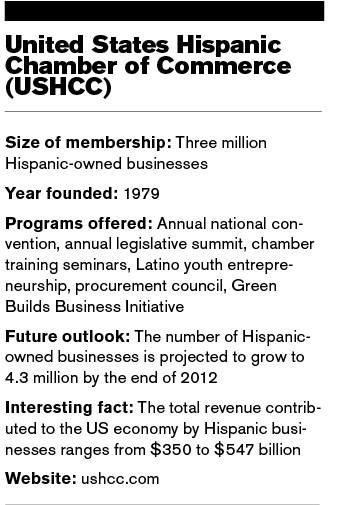 Despite being launched just last year, the success stories are already piling up. Take for example the story of Salt Lake City’s JJH Auto Body. After becoming certified through USHCC’s Green Builds Business Initiative, the owner of the shop implemented the practices and policies he learned through the program, catching the attention of Avis Car Rental. The company was so impressed that they named JJH a preferred local business and soon after the Salt Lake City Police Department became a major client. “Can you imagine the power an initiative like this has in helping a Hispanic-business owner reinvent their business? Imagine the difference it made to JJH’s revenue when the police department and Avis became clients,” Palomarez says. “The issue was that many business owners weren’t aware of the rebates and discounts and tax credits associated with going green. This is a program that can affect real change and it’s a good indication of the direction we will continue to go in.”