“I always knew I wanted to be a consultant, which meant I was comfortable working on my own, but I never saw myself as an entrepreneur. Soon I realized that as a business owner, in order to succeed, you need that entrepreneurial spirit to endure the ups and downs.

I started PMA Consultants in 1971, while I was finishing up my PhD at the University of Michigan. In my formative years, I was under the Townsend & Bottum umbrella, so the ups and downs weren’t as big of a deal. I was just a rounding error in their annual billings. In 1980, I decided to go out on my own, and my success or failure was now tied to my bank account. I invariably crashed every four years—I had my first crash in 1984, and another in 1988. It was then that I realized I had to develop a sustainable model for the practice.

I began reading books about strategic ways to structure a business and considered a way of thinking that would create a sustainable practice. After four years, I finally had my “eureka” moment. When I started the practice, I thought being cutting edge was the recipe for success. After a while, I felt “cutting edge” was not cutting it and that I better go more mainstream. I realized I’d have to outperform my competition, so I set out to do better than everyone else. When these two things combined weren’t creating a sustainable model, I discovered I wasn’t relating to my customers in ways that would build more career-term relationships, rather than one-night stands.

I understood this long-term relationship philosophy had to be a distributed DNA. To be effective, I had to embed this value through the enterprise, which gave me the structure on how I organized the firm. Today, we have six different business units, and I respond to critical issues. But I’m blessed to be able to spend the majority of my day innovating. 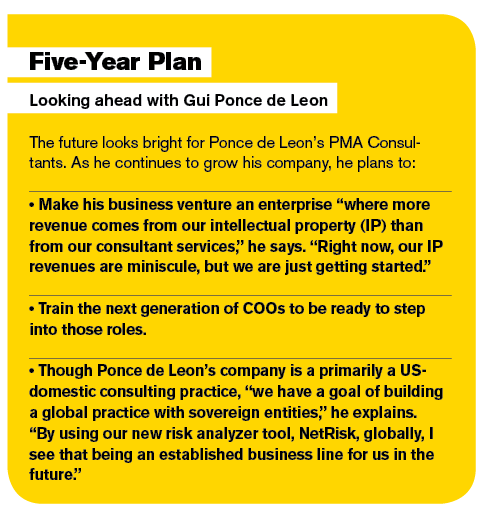 I believe project management is close to becoming a societal skill, as opposed to a professional skill. Life’s a project. You are what you do. Regrettably up to this point, project-management tools and techniques have been too complex. If it is going to have any impact on the society at large, project management has to become a lot simpler.

In 2004, I took the basic method of project management in a whole different direction, so professionals could be more effective with it, and laypeople could actually use these methods and tools to better perform in their daily lives. I’ve invented the graphical path method and developed software, NetPoint, to trade out the complexity and simplify how we do project management.

In my most favorable dream, I see a youngster in a village in Africa pop open his iPad for a project he has to do. He boots up NetPoint to plan his project, never having been to college, yet the program is self-teachable, and he’ll be able to be more efficient and more effective in what he is doing. That is the game changer for me—taking project management into the layperson’s realm.”