It was the late ’80s when two men found themselves walking through the doors of 101 California Street Tower and into the offices of Long & Levit LLP, a San Francisco legal institution founded in 1927. One was Michael Estrada, a man who had traded his dreams of becoming a professor for dreams of working on the civil side of law. The other man was Michael Vasquez, who had joined the firm in 1987.

While they both were close in age and grew up in the same area of Los Angeles, they had not met until that day at Long & Levit. They had no way of knowing at the time that this chance meeting would ultimately change the trajectory of their personal and professional lives.“From day one and the very first lunch we had together, we identified with one another,” says Vasquez, who with Estrada now works as partner of the Vasquez Estrada & Conway LLP law firm. “Besides having a tremendous amount in common with one another, we were basically two of only three Mexican Americans in a large, majority-owned law firm.

“Long & Levit was one those firms where you felt like you had to make your own way, and that’s what [the partners] expected,” Estrada adds. “Looking back on it, we would turn to one another to not only get through a rough spot, but also generally advance in the firm. Mike and I were always touching base regarding the best ways to handle certain situations, which went on to build a sense of trust both in the person and their judgment, that we built on to establish our own practice.”

Vasquez Estrada & Conway was formed in 2001. Recognized as one of the top 500 Hispanic businesses in the United States, Estrada, Vasquez, and Patricia Conway—the firm’s third partner—have over 65 combined years of legal experience and have taken over 45 jury trials to verdict. The firm boasts 24 attorneys split between a San Francisco Bay Area office in San Rafael, California, and a Los Angeles County office in Glendale, California.

“We are currently doing a lot of product-liability defense cases, especially in the asbestos realm,” Estrada says. “It is very challenging and demanding practice. The plaintiffs are ill, often dying. They are typically granted preference in terms of trial setting, meaning 12–18 months of litigation are squeezed into 3–4 months. We routinely encounter multimillion-dollar demands with these cases. The environment demands good management, good judgment, and a lot of multitasking from our entire litigation team. Again, it’s very demanding, but also very rewarding when we are able to get the best result possible for our clients.” 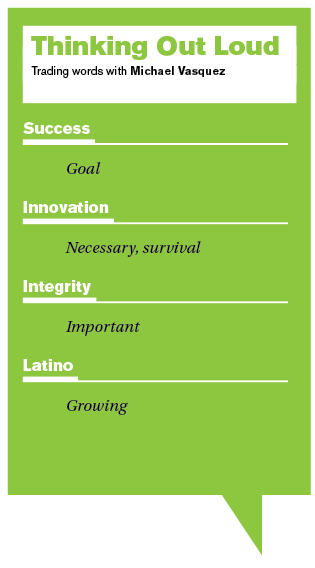 “We have been working with some of these clients for over 15 years, and they have decided the future and liability of their company is going to live or die based on our litigation,” Vasquez adds. “It’s an awesome burden, and there are many nights I go home and wonder if we can do this. If we can’t do it, the client is going to go bankrupt. So yes, it is an awesome and sometimes daunting task.”

Both Estrada and Vasquez come from a Mexican background, and say they have always felt a certain amount of responsibility to be a vital part of the law community. “When I was just starting my career, I did indeed feel that this was the best way that I could serve my community,” says Vasquez, who has also spent much of his career defending dentists, doctors, lawyers, and real-estate agents in professional-negligence suits. “It was a chance to show people that even though you come from a different background or your skin is a different color, you still have the same lawyering skills and you can still do the job.”

“When you are one of the few representing your ethnic group, people will consider you as a representative of that group,” Estrada says. “You always have to be cognizant of that.”