When Patricia Romero was working as national advertising manager for Hyundai, she spearheaded the company’s rebranding, which sought to change consumer perception about the auto manufacturer. The large-scale mass-media campaign called Think About It was a huge success, and won Hyundai Advertising Age’s marketer of the year award in 2009. After another successful position in the field—as multicultural and specialty marketing director at JCPenney—Romero has moved on to a new role at Time Warner Cable, where she oversees acquisition, growth, and retention marketing for multicultural consumers across the company’s West region. Here, she shares some of her most notable campaigns for the cable and telecommunications giant.

Targeting Asian Community with Back-to-School Campaign
The Asian population in Southern California spans multiple cultures, and Romero sought to target the diversity of this market when launching Time Warner Cable’s back-to-school campaign in July 2012. “We did a deep dive into the three largest segments—Chinese, Korean, and Filipino—to ensure that we understood the viewership behavior,” says Romero. “How are they obtaining content? Are they cable or satellite viewers, or do they stream content online?” Using this market-research data, Romero launched three campaigns under the Enjoy Better creative platform, each of which have programming and marketing nuances that are extremely relevant to the targeted audience. “We revamped our offer strategy to make sure we targeted each segment from the proper product and price points,” says Romero. “For example, we know our Chinese market is averse to landlines, so we gave them a double-play offer. But, our Korean consumers want the full breadth of our cable product, so we offered them a triple play.”

Reaching Hispanics Via Direct-Mail Campaign
Direct mail is a key marketing medium for Time Warner Cable’s business, but in the past, the company’s multicultural efforts were broad. Romero worked with Time Warner’s analytics team to apply a propensity model, which is a statistical scorecard used to identify those consumers most likely to exhibit desired behavior. Using that data, in addition to acculturation overlays, Romero was able to focus on consumers who were most likely to respond to an offer. “Instead of sending out mass direct-mail adverts to Hispanic households, we’ve become very specific in terms of our offer,” says Romero. That’s increased the number of offers we have in the market, but it’s had good results. In the three months since we began the campaign, we’ve seen a threefold increase in call response.” 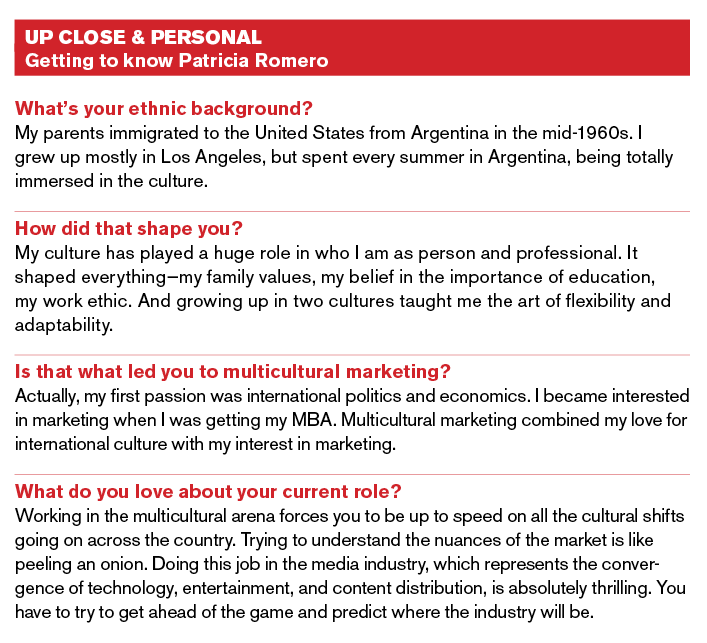 Partnering with People En Español
In July 2012, Time Warner cable announced that it would be sponsoring People En Español’s Festival, a musical event taking place in San Antonio over Labor Day weekend. “It’s one of the largest sponsorship opportunities focused exclusively on the Hispanic market, and People En Español is looking to make this event one of its largest tent poles for years to come, so we’re thrilled to be getting in on the ground level,” says Romero, who’s also pleased about the partnership Time Warner Cable established with HBO for the event. “HBO Go allows consumers to get content anywhere, so we’ll be touting our high-speed online product, which allow viewers to get the best experience possible from content partners such as HBO,” she says. The sponsorship will have national extensions, with messaging incorporated into mass media, social media, sweepstakes, and talent affiliations, adds Romero.