More than 115 million Americans depend on SunGard Public Sector, Inc’s software and services, although citizens may not be aware of it. In cities surrounding major metropolitan areas like Miami, New York, Chicago, and Los Angeles; in some of the nation’s largest counties; and at nonprofits such as the Scripps and Sanford-Burnham research institutes; SunGard’s products act as the backbone of day-to-day operations for local governments, public safety and justice agencies, and nonprofit organizations. 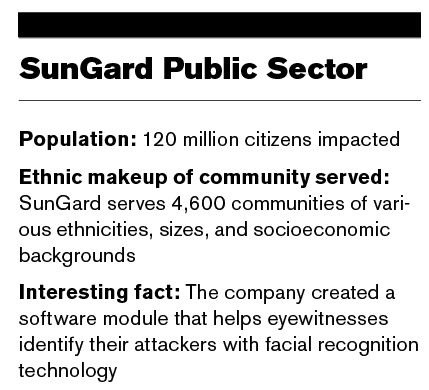 SunGard software allows residents to pay their water bills, access city records online, or search ordinances and local laws of government, all with a few clicks on a computer. It’s the kind of technology cities are expected to provide in a 21st century society, says Gilbert Santos, CEO of SunGard.

“My entire professional career has been focused on helping the public sector improve delivery of essential services to its constituents. Our philosophy of continuous learning and partnership is often the catalyst for government to embrace new technology and achieve higher, more efficient levels of service,” Santos says.

SunGard is first and foremost a technology firm that has always been focused on local government operations and municipalities, with more than 30 years of experience in public-sector issues. That experience is brought to bear on the latest technology trends, from cloud-hosted software, to apps for mobile devices that deliver information to the point of need, and business-intelligence reporting that provides staff and citizens with a clearer picture of how governments work.

SunGard’s technology services help communities with populations of hundreds of thousands, as well as those with just hundreds of residents, Santos says. One product line is designed specifically for neighboring police departments to work together to share information across boundaries. “We’re able to track drug offenders crossing one boundary to the next. It exposes information to other public-safety agencies in a region and helps regional policing on a whole,” he says.

SunGard’s technology has even sparked legendary change that some may call a fundamental revamp on how police work is conducted. The Florida-based company recently gained notoriety for its Remote Lineup software that helps eyewitnesses identify an attacker or criminal. Remote Lineup was a key technology component in a first-of-its-kind field study examining the role that mistaken eyewitness identifications play in wrongful convictions, conducted with the American Judicature Society, the Innocence Project, and local law enforcement. That study was featured in a 2009 segment of 60 Minutes.

Remote Lineup replaces the standard lineup seen time and time again on detective shows and in suspense films. Now, many police departments are using one-on-one software that asks a victim or an eyewitness a series of questions on a computer. The software also displays single photos of one potential suspect after another, instead of shots side by side or in a row. Some law enforcement and psychological experts have determined that an eyewitness can easily mistake their attacker for another person when a row of individuals is presented all at once.

Laws and ordinances for some communities are enforced even more effectively with the rise of technology designed by firms like SunGard. Using SunGard products, citation officers can access up-to-the-minute city ordinances through mobile devices, and issue warnings or penalties on the spot. Another module designed by SunGard stores, categorizes, and analyzes data on gangs so public-safety agencies can track common characteristics like colors, signs, slogans, gang leaders, and members.

Their efforts to help streamline local government processes have yielded as much impact as their products to help combat crime in communities. In St. Petersburg, Florida, for example, more than 1,200 simple permits are issued a month for additions like outlets and water heaters. Citizens could only obtain permits by coming into City Hall. Now in St. Petersburg, residents can create permits online within seconds saving precious work time for city employees and waiting time for anxious residents, Santos says.

Danielle Karczewski on Life as In-House Counsel at Eisai Inc.