Through The Hartford Financial Services Group’s diversity committee, associate general counsel Ricardo Anzaldua promotes inclusion within its ranks and throughout the profession as a whole

In his professional role as associate general counsel and director of commercial and consumer markets law at The Hartford Financial Services Group, Inc., Ricardo Anzaldua advises the $22 billion insurance giant’s property-casualty and group-benefits businesses, deals with top corporate brass on a daily basis, and oversees a staff of 42 with an operating budget of $9 million.

When he’s not working his day job, Anzaldua cochairs the legal department’s diversity committee, which he cofounded a few months after he began working there in 2007. His objective? To advance diversity in the legal profession.

Although he was born in New Mexico, Anzaldua was raised in South Texas, where his father’s family has lived for generations. It was there that he learned what it meant to be a Mexican American and what kind of discrimination he could face, such as lower-paying jobs or the slow track in school. Not surprisingly, his experiences only served as motivation, and after a stint at the Air Force Academy, Anzaldua wound up at Brown University majoring in Latin American studies. From there it was PhD studies and a senior editor position at the Center for US Mexican Studies at the University of California-San Diego. That is, until a chance meeting with a Ralph Reisner, a visiting fellow who also happened to be a lawyer, changed everything.

“In publishing, I thought I’d have a voice on questions of economic development and social progress in Latin America, but it wasn’t happening,” Anzaldua says. “Ralph suggested I become a lawyer and work on what was important to me through the law.”

That’s exactly what he did. After graduating from Harvard Law School, Anzaldua was offered a job at Cleary, Gottlieb Steen & Hamilton LLP, a white-shoe New York law firm. His first job: advising the Kuwaiti government, then in exile, on acquiring the goods and services needed to liberate the country from the invading Iraqi army. 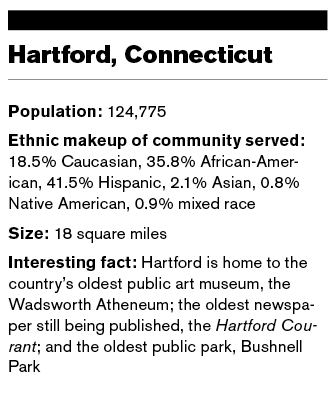 It was during his time at Cleary, Gottlieb that Anzaldua first became passionate about encouraging diversity in his profession.  Indeed, his tenure as chairperson of that firm’s diversity committee led to his interest in establishing a similar group at The Hartford. “We want to be sure that everyone—women, people of color, Latinos, Asians, everybody—is valued for their contributions,” he says.

In addition to striving for diversity in its own legal ranks, the committee is also involved in giving back to its hometown community of Hartford, Connecticut. Sponsoring dinners at homeless shelters and participating in the Junior Achievement program, in which company attorneys teach classes at inner-city high schools, are just two of its numerous activities. “There are many opportunities to promote diversity in our community, both internally and externally,” Anzaldua says. “The best way to function as a committee is to make sure we seek out those opportunities.”

Participating in Call to Action is another of those opportunities. Begun in the late 1990s by the then-general counsel at Sara Lee Corp., Call to Action is an effort to direct outside counsel to corporations to pay attention to diversity in their ranks. It’s a great idea, according to Anzaldua, but one that has devolved largely into lip service. “Most firms try not to embarrass themselves by not having their staff be devoid of minorities,” he says. “But, it hasn’t done much to change how the legal profession looks.”

Until now, that is. In an innovative twist, The Hartford has joined other corporate leaders on diversity issues by asking outside firms to have diverse lawyers work on its own projects and cases. That way, Anzaldua points out, he and other attorneys at the company can both teach and mentor the younger lawyers, while helping to advance their careers.

“There are many more diverse associates than partners,” he says. “So we’re kind of shepherding careers along a bit and helping develop talent in law firms, with a view toward one day having them become partners.”