Never being afraid to make moves

Frequent reminders of the opportunities available in the United States contributed to Carlos Navarro’s eagerness to embrace risks and make moves—both literally and figuratively—throughout his career. “When you are a first-generation immigrant, you are told from an early age what great opportunities this country provides,” says Navarro. “That drives you and motivates you to be successful, not necessarily monetarily but to find your passion and follow it.”

Navarro explains he sought out adjacencies (adjacent industries and adjacent opportunities ) to advance his career, a philosophy that would eventually lead him to an international role as chief marketing officer of Elavon, which provides integrated payment processing to one million merchants. “Once you get over the old way of thinking that you have to dedicate your life to one company, you realize you have control over your career, and you can start looking at the possibilities,” he says. Some of Navarro’s moves were very intentional, such as he wanted to get involved with a particular technology, but other positions were found through old-fashioned networking. 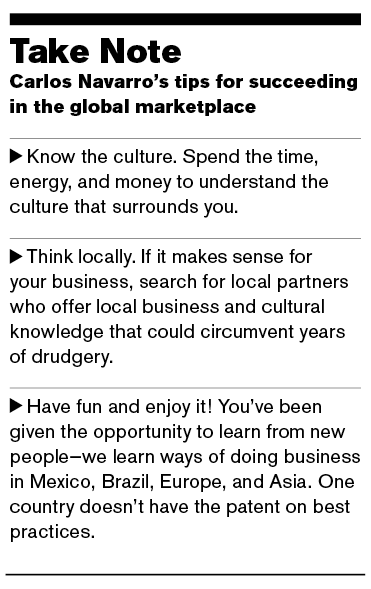 A Georgia Tech Industrial Engineer by trade, Navarro has nonetheless spent more than 18 years in sales and marketing. He began at IBM and worked his way up the organization before jumping into the world of customer relationship management (CRM). “In the early ’90s, the computer-software industry was really taking off. I went to work for Marketing Information Systems in Chicago, one of those companies that initially entered the market with CRM solutions.” There he developed his software and sales background before taking a position with a competitor, Brock Control Systems in Atlanta. “These were two companies that came before the industry leaders that emerged over the last decade, like Oracle and Siebel,” Navarro says.

Leaving IBM was one of the riskier moves Navarro made in his career. He left the nearly 300,000-person company to join a team of 60. “It was blind faith,” he says. “Once you get over the shock of understanding what being an entrepreneur means, which is doing everything yourself, you suddenly realize there aren’t 300,000 people behind you, and you have to deliver. Leaving the comfort of a long-term company was a risk, and, in retrospect, I should have been more intimidated than I was.”

In 1998 Navarro was asked by a former colleague to help build Inforte, a CRM and business-intelligence consultant company. Over the next six years, he led the CRM practice, growing it to a $70 million company, and then took it public. After that, he stayed in the consulting sector and became a vice president at eLoyalty before joining Elavon.

“Elavon was another big career move for me. I had been in technology hardware and software and consulting but had to make an adjacent move to a credit-card processing company within a bank,” says Navarro. “Everything I had learned over the last 16 years said, ‘I know how to do this job’—it was just a different industry and different environment.”

Navarro credits his wife for her willingness to relocate, but also explains each move—whether physically moving cities or just moving from one company to another—was always done because the new challenge was greater than the one before.

Now, as chief marketing officer of Elavon, Navarro oversees a team of roughly 50 people around the world. Breaking out from the traditional marketing model, Navarro has his hand in the customary public relations and collateral creation, but his forward-thinking department is also an enabler of sales and revenue. They are responsible for strategic marketing, customer-experience management, business intelligence, product marketing, and professional services, all of which help provide Elavon with the marketing insight to enable strategic decisions and revenue growth.

Surrounded by traditional and new-age competition, Elavon must grow through innovation. “We continue to invest in product management, enabling industry-leading products to come to market, and empowering our sales force and our customers to utilize them,” adds Navarro. He explains one of its recently released products was the first EMV-capable mobile solution for the European market. Navarro says, “This solution is a great example of how we compete in today’s market. We have to marry innovation with our investments in technology to drive scale and flexibility and deliver solutions that make sense for our customers and partners.”

As for the future, Navarro explains he has a long runway of opportunities in front of him at Elavon. With new and unfinished business, he is eager to produce results for customers and partners, the company as a whole, and the shareholders of US Bank.

At age 21, Henry Mesa worked in electronics by day and taught it by night.