Jaime Cardenas was a mechanical engineer in Mexico working at the Hanes division of Sara Lee when he relocated to the United States. While in North Carolina, he decided to broaden his skills and his future by attending the MBA program at Wake Forest University. It was there that he took an entrepreneurship course and was challenged with starting a real business. With no marketing experience at all, he and Alfredo Amparan Garza founded AC&M Group, a strategic marketing agency with a focus on soccer and other sports.

For almost two years, Cardenas maintained his full-time job while doing marketing and advertising on the side, until 2005, when Cardenas resigned from Hanes and jumped into AC&M Group with both feet. Today, the Charlotte, North Carolina-based agency has 13 employees and boasts a client base including Pepsi, Stanley Black & Decker, American Airlines, and Fox Deportes. HE spoke with Cardenas to get the backstory on some of  the most memorable programs AC&M has kicked off.

1. Soaring High with Major League Soccer
In 2011, American Airlines’ (AA) marked its fourth year as the official airline of Major League Soccer (MLS), as well as the sponsors of US soccer and several local teams in its key markets. The airline wanted to reach both the Hispanic community as well as the general market by utilizing the media assets they had at their disposal as a result of these sports partnerships. AC&M developed the overall soccer strategy for AA, then designed the creative, placed the media, and built an online landing page for multiple targets, including soccer families, Hispanic fans, European soccer fans, and general MLS fans. Included in the program was Eurosport, the largest soccer catalog in the United States. “Including a sports catalog as part of a media plan is something that other agencies might not consider as media, but we took advantage of its extensive network,” Cardenas says. AC&M utilized Eurosport’s database, one million-plus social-media fan base, and catalog to market the AA brand, including web banners and co-branding at more than 500 soccer events Eurosport participated in. According to a study released by the Sports Business Journal, American Airlines became the number-one airline among MLS fans, and its efforts exceeded ROI projections for four consecutive years.

2. Growing Fox Deportes’ Social-Media Presence
For this Spanish-language channel owned by Fox Sports, AC&M created a social-media strategy to grow its Facebook and Twitter communities. The project also included social-media training for Fox Deportes’ on-air talent. For the first six months, AC&M wrote all the social content and trained its internal team. After the transition, the agency monitored and consulted, providing weekly reports and advice on how to improve results. “When we started the project, Fox Deportes’ Facebook page had 12,000 fans; today, it has more than 350,000, and we did it all with zero advertising dollars,” Cardenas says. They also doubled the channel’s Twitter followers and launched fanaticoscongarra.com, an online platform based on social-media insights built for passionate sports fans. Today, Fox Deportes has the largest community of any sports network targeting Hispanics in the United States. 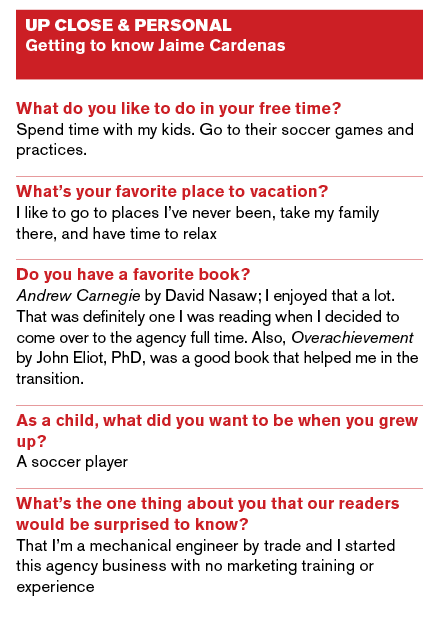 3. Boosting Numbers for Tienda Futbol Mundial
Spanish-language soccer e-tailer Tienda Futbol Mundial (TFM) wanted to increase web traffic and sales. The e-tailer already had a strong database of more than 1.5 million soccer fans (both English and Spanish speaking). AC&M realized TFM had a wide variety of products, “but people generally thought they only had jerseys,” Cardenas says. The agency conducted an in-language program tying e-mail messaging to team loyalty. Prior to key events, AC&M sent out e-mail blasts and ran banners and print ads in partner publications such as ESPN Deportes magazine featuring products of the teams involved in an impending soccer event. When a team won, e-mails would be tailored around gear branded for the winning team. Recently, AC&M began further segmenting e-mails based on team alliance, language preference, age, and gender. Tiendafutbolmundial.com saw a direct correlation between sales and targeted e-mail creative.