What obstacles did you face to get to this point?
I am generally a glass-is-half-full type of person so I prefer to look at obstacles as challenges. Being a woman and a second-career lawyer is sometimes challenging because you are competing with much younger colleagues that have different priorities, and for which there are more mentors and traditional role models.

As a woman, I also find it more difficult to separate my career from my family life. This means we are good at multitasking, but it also makes us more vulnerable in the business world and at home. There are different styles of communicating between men and women and we are still outnumbered in the corporate world, although that’s changing.

As general counsel, what are your responsibilities?
I am responsible for general legal and compliance matters across our three business units, retail brokerage, reinsurance brokerage, and human-resources consulting.

My job also includes managing relationships with our outside firms in the region, whether it involves a regulatory issue, litigation, or a transaction. Each day, I actively partner with local firms to understand the complexities of various legal systems and issues in Latin America, and translate not only the language but the legal jargon in a way that Aon’s management can understand. It’s a never-ending challenge, but it’s also a constant learning opportunity. 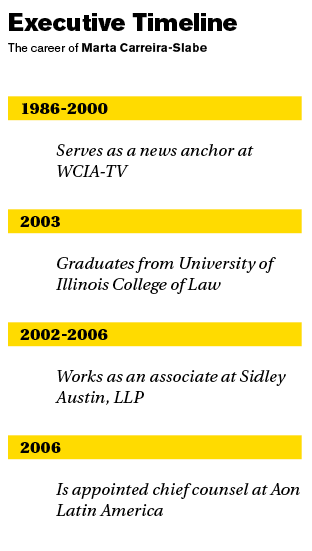 What is your favorite part of the job?
Reconnecting to my lost heritage through the many relationships that I have forged at work and personally in the region.

As a female who oversees a team of lawyers in a male-dominated region, what are important leadership qualities to have?
I think that women in Latin America who are professional, confident, and good at their jobs can leverage all of these attributes and become very successful in their roles. In many ways, being one of few women in the region is empowering. But, you have to be prepared and have a thick skin.

Whether you are male or female, you also have to be willing to devote sufficient time to relationship building so you can establish trust. You also have to pick your battles. You have to know when you can compromise and when you need to stand firm. I am still working on teaching the American concept of “knowing when to pick and choose your battles” to our colleagues in [Latin America].

How has your heritage and upbringing influenced your life and work in Latin America?
My immigrant parents were the best role models anyone could hope for. They left Cuba in the late ’60s with four young children and one suitcase per capita; that’s it, nothing more. We lived in Madrid for two years before immigrating to the [United States] in the early ’70s. I remember early images of my parents struggling to learn English, but they reinvented themselves and prevailed.

My father has a PhD in civil engineering and continues to teach at the age of 78. My mother, who had been a university professor in Havana, earned a masters degree in teaching and taught bilingual kids in elementary school. My parents led by example and taught me the value of education at any age. That’s why I went to law school and pursued a second career as a mom of three young children. I figured if my father and mother could do it under much more difficult circumstances, there’s no reason I shouldn’t.

I also think that being not only bilingual but bicultural is a huge asset. As a Cuban American, I understand both cultures, and have benefitted from the best of both worlds. This has worked well professionally and personally.