When Jorge Torres moved to the United States in 2002, his wife was pregnant and his only point of reference for the country was from a summer-long stint as an exchange student in the ’80s. Needless to say, it was a difficult transition to make, but after spending six years as the Roca Tile Group’s export area manager in Barcelona, Spain, Torres felt prepared for something new. He was ready for a change. So, when the leading global bathroom and ceramic tile brand offered him a position in California managing a tile distribution network of 17 stores, it was too good to pass up—and later proved to be an important stepping stone. In 2011, Torres was named the Roca Tile Group’s North American managing director/CEO.

To put it mildly, the Roca Tile Group is well established. The family-owned company appealed to Torres because it offered a long-term vision and a clear definition of values nearly 100 years in the making. Roca offers high-quality ceramic and porcelain tile under four brand names (Roca, Laufen, United States Ceramic Tile, and Incepa) and though it has showrooms all over the country, including Florida, Texas, New Jersey, Illinois, California, and Virginia, the company needed a serious push in the US market. This is where Torres stepped in.

The concept of doing business internationally wasn’t new to the Roca Tile Group. The Spanish company has a business network spanning 80 countries and the brand had experienced major success all over Europe. Torres also had experience doing business in Dubai and the Middle East. However, coming to the States required that the CEO stretch and adjust in new and unfamiliar ways because not only was Torres just getting established in the States, but so was Roca. “I was motivated by the challenge to grow and support the Roca Group in the US market, which at the time was a new venture for our company,” Torres says. “It required adapting to new customs while keeping the values of the corporation and transmitting the company philosophy without losing touch with international needs.” 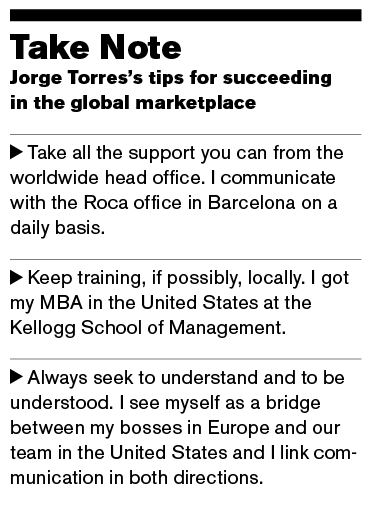 Never one to rest on his laurels, Torres believes that the business strategies that have brought him the most success in his new role are his relentless search for improvements to products and processes and his refusal to take anything for granted. This means that just because Roca Tile Group has managed to become a leader in other parts of the world, it doesn’t guarantee that long-term success in the United States will come just as easily. “It’s important to understand the ultimate goals, focus on those goals, and communicate them well,” Torres says. “A big part is commitment to the company and capacity of communication. I am fortunate to have Roca’s support from our head office to help me navigate the way. I would not be able to succeed without that support.”

Torres is big on communication, believing that being a good communicator is a key attribute to being a successful CEO, especially one running an international business. Constantly conveying core missions and communicating the direction of the company to your team, customers, suppliers, and stakeholders is a task Torres takes very seriously. Which explains why Torres communicates with the Roca office in Barcelona on a daily basis. “Being able to connect one-on-one to the main office in Barcelona is one of the major advantages of being part of a multinational group,” Torres says. “Connecting to the main office makes me feel like I’m maintaining my support system and keeping it in place. It also keeps the direction clear. From product and financial issues to HR issues, it’s [important]to stay in sync.”