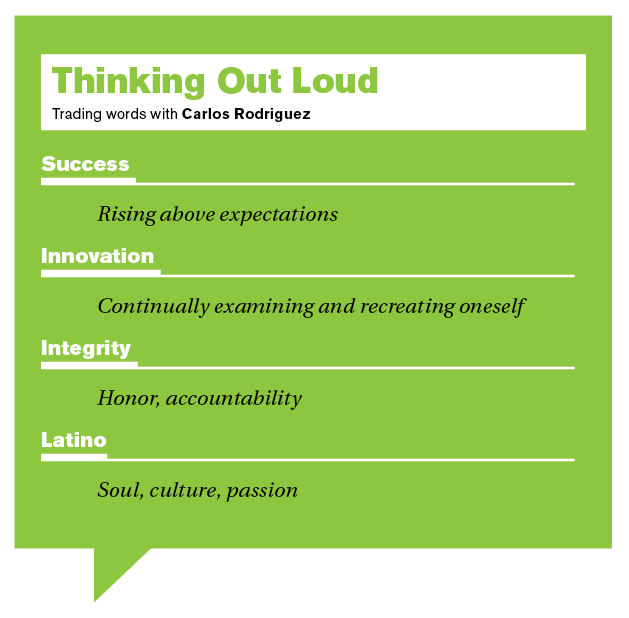 The son of a blue-collar immigrant, Carlos Rodriguez, regional director of sales for Powerit Solutions, grew up in east San Jose in an area once known as “Sal Si Puedes” (Spanish for “Escape If You Can”), but was buoyed by a loving, nurturing environment that set the foundation for his future. “I tell people I was educated in the school of hard knocks,” Rodriguez says. “It would have been easy for me to give up, but I decided I was not going to become a statistic.”

A first-time dad at 19, Rodriguez decided to “dig deep” and do the right thing which meant raising three children while working 60-plus hours a week and going to college part-time; however, his “game-changing” experience almost passed Rodriguez by. “I was called for an interview, but almost declined since I thought [the job] was a long shot at best, but my wife convinced me I had nothing to lose,” he recalls.

His long-shot turned into a sure thing when Rodriguez was hired as a project manager for a widely respected electrical engineering and construction firm. “I was recruited by Bill Breyton, who became a mentor to me, and the position set me on a course I don’t know I would have otherwise pursued,” Rodriguez says.

The one thing Breyton made Rodriguez promise was to complete his college degree. When Rodriguez graduated nine years later from the University of San Francisco, he sent Breyton a note of thanks for taking a chance on him. “He was the key that unlocked the door to my professional success,” Rodriguez says.

Over the next decade, Rodriguez gained technology and project-management experience while building relationships that led him to his current role with Powerit Solutions. “Powerit wanted someone to help them grow and I was willing to take on the challenge,” Rodriguez says. “I love the company’s entrepreneurial spirit and felt I could make an impact for a smaller firm while building on my accomplishments. It was a win-win decision for me.”

Built on leading green technology, Powerit Solutions plugs more than 2,500 industrial clients around the globe into the “smart grid,” helping them take advantage of its benefits—saving money and reducing energy consumption without negatively impacting production or compromising quality. The company’s main offering, an innovative-energy-management system known as Spara, is an integrated hardware/software product that acts automatically to increase energy efficiency, cut peak-rate usage, and respond to utility demand, all while creating a more sustainable operating environment without having to invest millions of dollars. “It’s exciting to be a part of this wave of information technology that will ultimately enhance and optimize the way energy is consumed,” Rodriguez says. “It’s also exciting to be part of an organization that offers clients tangible results and helps them meet their business objectives in a volatile economy.”

On a regular day at the office, Rodriguez spends most of his time on the phone with internal and external clients, leading and managing the revenue growth for Powerit’s Western region. “I feel I’ve made a great impact cultivating relationships with alliance and channel partners that will effectively allow our company to make great strides as we continue to expand and evolve,” he says. “I feel relationship building is my strongest asset. In fact, when people ask my kids what I do, they always say, ‘he builds bridges.’”

In the coming year, Rodriquez looks forward to working internationally with clients utilizing Powerit’s energy-management software in Canada, Mexico, and Peru. He also plans to continue building “meaningful relationships” with those who share his passion and enthusiasm to succeed, personally and professionally. “People back themselves into a corner by allowing others to tell them who they are. You have to create your own opportunities, blaze your own trail,” Rodriguez says. “A culmination of my life experiences, from my mother battling breast cancer to my father attaining his citizenship, taught me to always fight for what you believe in. And when people don’t treat you fairly, fight harder to earn what you deserve.”