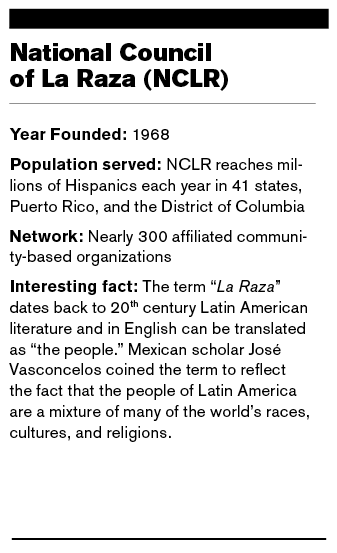 From humble beginnings, Janet Murguía could never have predicted she would someday be at the helm of the National Council of La Raza (NCLR). She attributes her own experience of chasing the American dream to her desire to open that same door for millions of families. “My parents came to this country with very little in terms of education and certainly resources, and their belief in this country and the opportunity it would have for their family guided them,” Murguía says. “A lot of my career and motivation has been rooted in my upbringing and reflected in the values I developed growing up.”

From an early age, Murguía grasped the value of education and ambitiously sought out opportunities. Right out of law school, Murguía worked on Capitol Hill as a legislative counsel to former Kansas congressman Jim Slattery and later became counsel for the Energy and Commerce Committee. In 1994, she began working at the White House under President Bill Clinton. Murguía started as special assistant before being promoted to deputy assistant to the president and later deputy director of the Office of Legislative Affairs, earning her a desk in the West Wing of the White House. “Any time you have exposure to the West Wing, it is an eye-opening experience,” Murguía recalls.

While in the White House, then-Vice President Al Gore asked Murguía to lead his presidential campaign. When the campaign ended, she decided to head back to her roots. Born and raised in Kansas, Murguía accepted a job at her alma mater, University of Kansas, as executive vice chancellor of external affairs. Considering her congressional, White House, and campaign experience in addition to the time spent in higher education, Murguía was well prepared when she was heavily recruited to assume the role of president and CEO at NCLR. She adds, “It was easy to make the choice to come to an organization like NCLR, which I believe is the most respected in the nation that serves the Latino community.”

Upon accepting the position at NCLR in 2005, Murguía got to work strengthening the presence of Latinos across the country by further developing the organization’s partnerships with approximately 300 community-based affiliates. Murguía says, “These community-based organizations across the country allow NCLR to support the Latino communities through grants, capacity building, and technical assistance.”

At the heart of her mission, Murguía leads NCLR in its efforts to provide services for Latinos to address their education, health, home-ownership, and workforce-development needs. She pushes advocacy and policy work to allow the community to advance and succeed. “We are committed to creating opportunities and opening the door to the American dream,” Murguía says. “I believe we are able to accomplish this through the different programs and through the policy and advocacy work that we support.”

Her work done through NCLR has earned Murguía numerous recognitions, including a feature in Newsweek magazine’s “Women and Leadership” and The Washingtonian magazine’s “100 Most Powerful Women in Washington,” an honor she holds alongside women like Hillary Clinton.

As NCLR’s spokesperson, Murguía’s also appeared on a handful of national news programs including ABC World News Tonight, CBS Evening News, NBC’s Today, and CNN’s Larry King Live. She proudly shares the organization’s work with the country. “In this day and age, we have to be mindful and make sure we are getting our message out and telling our story because it important for us to continue that work and build on it,” she says.

Murguía explains Latinos are a modest community and while they are proud they don’t like to keep the praise on themselves. “We have to start thinking of that differently. It isn’t that we are keeping praise as much as we are telling our story and the impact of our work so we can be in a position to make further progress,” adds Murguía.

She feels NCLR has a solid reputation in terms of programming, policy, and advocacy work, but hopes to expand their civic engagement by strengthening the political voice of Latinos in the country. Murguía reveals every year 500,000 Hispanics turn 18. She says, “We need to engage Latinos in naturalization, voter registration, voter education, and voter mobilization. My hope is to reach out to the community and make sure they are helping us weigh in, be heard, and get the outcomes we want in this country.”