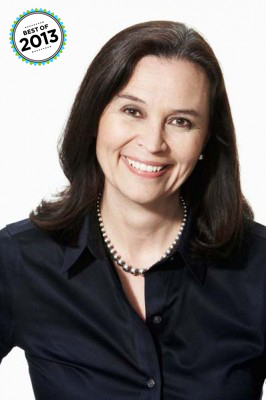 For Perry Ellis International, Inc.’s Cory Shade, there is no typical day at the office. One day she could be working with the company’s board of directors and shareholders. The next day she is facilitating a joint venture agreement or an acquisition. Another day might find her working on SEC filings, as Perry Ellis is a publicly traded company. “The variety is something I very much enjoy,” says Shade, general counsel and senior vice president. “The challenge that the variety brings—I absolutely love that.”

With its headquarters in Miami, Perry Ellis International is a leading designer, distributor, and licensor of a broad line of high-quality men’s, women’s, and children’s apparel, accessories, and fragrances. The company, through its wholly owned subsidiaries, owns or licenses a portfolio of brands that includes 29 of the leading names in fashion, such as Perry Ellis, Original Penguin by Munsingwear, Laundry by Shelli Segal, Ben Hogan, Nike swimwear, and Callaway.

The apparel maker operates more than 40 Perry Ellis stores in the United States and Puerto Rico and more than 15 Original Penguin US shops. The company also engages in direct-to-consumer business via company-owned retail stores and e-commerce websites. In 2011, Perry Ellis International earned nearly $1 billion in revenue.

Serving as senior vice president and general counsel for Perry Ellis International since October 2006, Shade has ascended to a position that even today remains rare for a Hispanic woman (or any woman for that matter] to hold. Because of her first name, Shade is often referred to as “Mr. Shade” in professional e-mail exchanges and business associates are, therefore, usually in for a surprise when Shade strides into a meeting. “That throws them off,” Shade says. “It’s not something that they can’t recover from, but they have a certain expectation. And also the name Cory Shade doesn’t sound necessarily Hispanic so that throws them off also.”

Because Perry Ellis International is a global company, Shade works with executives from a variety of cultures, some of which aren’t accustomed to seeing a woman in her position. Ironically, Shade says, being a woman has sometimes helped during business meetings. “When you still have very chivalrous men and very respectful men, if a woman is in the room there’s a different decorum, which can help facilitate keeping things on an even keel and getting things done in a quick manner as well,” Shade says.

Though she has a great legal mind, Shade has always had a love for business, in part because her father is an entrepreneur. So it just made sense for Shade to obtain a law degree and a MBA from Washington University in St. Louis, Missouri. “Getting my MBA along with the JD really helped prepare me on the transactional side and understanding the business side,” Shade says. Because of her education, she can better understand the needs of the businesspeople in her company and help them find solutions quickly, she says. 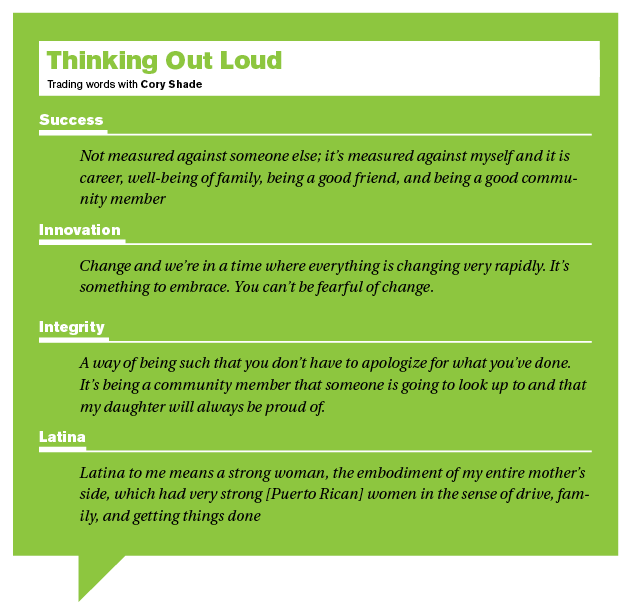 Shade’s background, however, is just part of what makes her good at her job. Shade grew up spending time between Joplin, Missouri, and San Juan, Puerto Rico. She’s also spent a lot of time working abroad or with people from different countries and cultures. “I believe that these experiences have been invaluable and help me approach matters from a unique and unbiased perspective,” Shade says.

Jimena Almendares Takes Her Career One Piece at a Time

Furthermore, the time she spent working at smaller organizations with limited resources gave her the opportunity to get involved in all aspects of the business. “Overall, I believe that all of these experiences enable me to see things at 30,000 feet—not just the detailed-lawyer perspective—and has taught me to never consider an issue as a permanent road block, but just a detour,” Shade says.

Shade believes that one of the keys to having a successful professional life is having a fulfilling personal life as well—devoting time to family, friends, and community. “I have an eight-year-old daughter and if I’m unable to spend quality time with her then I’m not focusing the way I need to at work,” Shade says. “I work very hard during the week so that I can have my weekends free with her.” Shade also makes the effort to take her daughter to school each morning.

Additionally, Shade is active in a local church, serves on the Unsafe Structures Board for the City of Oakland Park, is a member of one of Washington University’s Regional Cabinets, and is on the national board of the National Society of Hispanic MBAs. Over the years, Shade has been involved with numerous other community organizations, but she says she tries to limit herself to working on no more than three efforts at once. “I try not to spread myself too thin,” she says. “Otherwise, you’re not doing anything well.”