How do we combat the glaring health-care inequalities impacting the Latino community? Elena Rios, who heads the National Hispanic Medical Association, says it starts with improved representation in leadership positions and a commitment to delivering culturally competent care.

as told to Matt Alderton

Thanks to a perpetual symphony of hissing respirators, beeping heart monitors, wailing ambulances, and ringing phones, hospitals are a cacophony of medical murmurs. Dr. Elena Rios first memorized the melody as a senior in high school, when she got a part-time job working in a hospital with her mother, a nurse. And yet, even amid all that noise, what she heard most clearly was silence, created by a tangible absence of Hispanic voices in the American health-care system.

Determined to fill the void, Rios pursued a career in health policy. After earning her bachelor’s degree from Stanford University, she went to public health school, then medical school, at the University of California–Los Angeles. Simultaneously, she established the California Chicano/Latino Medical Student Association and the National Latin American Medical Student Network, which—along with other regional associations formed by Hispanic medical students across the country in the ’60s, ’70s, and ’80s—served as precursors to the National Hispanic Medical Association (NHMA), a nonprofit association representing the interests of 45,000 licensed Hispanic physicians in the United States. Having helped launch it in 1994, Rios now serves as NHMA’s president and CEO, leading the organization in pursuit of its mission: improving the health of Hispanic populations.

“The health workforce in this country is very white. Out of all the doctors in the country, only 5 percent are Hispanic. Dentists and nurses [account for] even less: Only 3 percent of dentistry professionals are Hispanics and only 2 percent are in nursing. So, it hit me very early on in my career that there were very few of us in the health-care profession and that we needed to work together to address the health of our community.

My interest in health policy has been about answering the question, “How do we improve a population’s ability tobe more functional?” Hispanics are the largest ethnic group in the country. There are a lot of Hispanics in [low-wage] jobs; they’re farmworkers, they work in labor and construction, they’re janitors, and they’re restaurant workers. Therefore, it becomes important to have policies that are directed to the Hispanic population so that everybody else doesn’t get sick. Also, as they get older and [become sick], whether it’s cancer or hypertension or diabetes, health policies directed to the Hispanic population help more people in our communities have higher-quality lives.

The biggest challenge in the health-care industry is going to be the increased demand coming from people who are uninsured that are about to get insurance with the Affordable Care Act. Doctors and clinics in our poor communities are not prepared for the large demand that they’re going to see. Over 33 percent of Hispanics don’t have insurance, so there’s going to be a lot of demand, in particular, on doctors who take care of Hispanic patients. [NHMA’s] role as an organization is to get information about the importance of the Affordable Care Act out to our communities so that people know where to get health insurance and how to enroll.

Along with increased demand, there’s the issue of supply. There’s a critical shortage of doctors in this country already, but there’s even more of a shortage of doctors who take care of the poor communities in our country, like those where most Hispanics live. There’s a lot of social mobility, but there are still farmworkers and Hispanic immigrants moving into places like the South—the Carolinas, Georgia, New Orleans. You’ve got places that have never had Hispanic families and doctors living there that need medical care that’s more culturally competent. We need not only doctors, but whole medical practices and clinics to be developed [in those areas]. 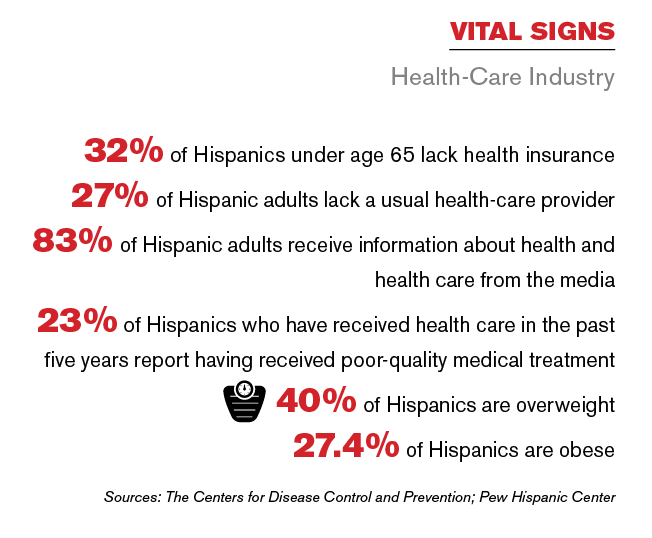 In terms of the health of the Hispanic population, probably the biggest issue is obesity. There are so many celebrations in our families with lots of food and drink. And because there’s such a strong traditional Mexican, Cuban, and Puerto Rican diet, we need more community-focused teaching on nutrition and obesity. Most Hispanics can’t afford to go to Whole Foods, so part of that is thinking about how to make healthy eating a reality with things like farmers’ markets.

Another thing we really need in our communities is more Hispanics in leadership positions who understand the importance of health, because there aren’t enough leaders making decisions that make the health-care system more responsive to Latinos. That’s one way that NHMA is giving back: We have an executive leadership training program for doctors that we call the NHMA Leadership Fellowship program. It’s not a management program; it’s a program that takes doctors who are already leaders and gives them the skills and encouragement and motivation to become [senior executives and board members] in the public-health and corporate arenas. We’re not just trying to advance doctors to become administrators; we’re turning them into top [political and business] leaders in order to drive change from the top down.”