She has advocated for change as the mouthpiece of cabinet-level departments, an entire political party, a president, and a presidential candidate. Now Cardona shares the soapbox in three of the greatest debates confounding Washington.

The distinct smell of empanadas wafted from the kitchen of the little green house on Floradel Avenue, in Leesburg, Florida. Cumbia played in the background and was occasionally drowned out by boisterous laughter. Children kept time with maracas—one of them a timid girl with her father’s green eyes. Dressed in his ruana—a traditional Colombian cold-weather poncho—he settled in to recite the novena in the heavy accent of a recent Colombian immigrant. 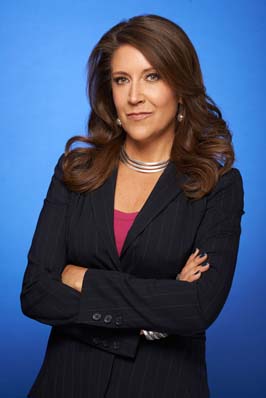 “Whenever I think of home and family, that is what I think of,” says Maria Cardona, the green-eyed girl now an adult recalling a typical Sunday around Christmas time at her childhood home. With no more context, one might assume the scene from Cardona’s memory is a family affair, but at the time of the festivities, her closest relatives were in Bogotá. Cardona and her immediate family were the only Hispanics on the block, and one of the very few Hispanic families in Leesburg. A firm believer in community, her father would host their neighbors each week for a sort of Colombian culture night. “People would come over who looked nothing like we did, but we would be laughing and singing like we had known them forever,” Cardona says.

A veteran of the media and government, Cardona reflects on the example her father set with more than fondness now. Having worked for CNN, the Democratic National Committee, the departments of commerce and justice, the inSPIRE STEM USA coalition, and Latinovations—the niche subsidiary of Dewey Square Group (DSG), the public affairs firm of which Cardona is a partner—she has witnessed time and again the strategic benefits of coalition-building. And it is that strategy, she believes, which is the key to uniting the most powerful voices in science, technology, engineering, and math (STEM); immigration; and education reform, with the goal of freeing up the gridlock that has impeded progress in such fields. “No matter where you’re from,” she says, “if you want to fit in and, more importantly, get things done, you have to show the people around you that you’re no different from them, and that by working together, you can achieve a larger goal.”

The common thread uniting technology, immigration, and education is the STEM gap. There are currently more than 100,000  STEM jobs whose vacancy is hindering productivity. In the technology camp, corporations such as Google, Cisco, and Intel are up against a hiring wall, applying for a finite number of H1-B visas (only about half as many as there are openings) to outsource those positions for which Americans are not qualified. Champions of immigration reform seek a path to citizenship often justified by the potential within each undocumented immigrant, the very idea the DREAM Act was built upon. And the architects of a new American education system seek a curriculum that is competitive and delivered with quality and resources that are universal and uncompromised.

“One of the coolest things about inSPIRE STEM USA is that it brings together what would be seemingly disparate and contradictory interests,” Cardona says. “We all know there’s strength in numbers. Framing these interests in terms of long- and short-term advantages allows all sides to succeed in pursuit of a broader goal.” In the short term, the coalition hopes to increase the supply of visas and use their associated fees to strengthen education. Long term, its goal is to amp up STEM education from three fronts: teachers, technology, and college completion.

Cardona says to see the immediacy of the STEM gap for Latinos—and Americans in general—one need only look 40 years ahead. In 2050, Latinos are projected to make up 29 percent  of the United States population. Currently, they are earning STEM degrees at a rate of less than 6 percent. “If we don’t ensure the workforce of 2050 is innovative, tech-savvy, and continues to launch trailblazing companies like Google, then American exceptionalism will be out the window,” Cardona says.

Addressing the STEM Crisis at the Roots

With inSPIRE STEM USA mobilizing the voices for reform, Cardona says implementing the tactics of the long- and short-term goals must begin in the classroom and in the home, where Cardona took her own first steps. “I make my kids do math every day, and we make it fun—especially with my daughter, who’s very good at math, by the way,” says Cardona with equal parts pride and conviction. Like her parents who never allowed Cardona or her siblings to speak English at home—when they asked, as children, “What’s for dinner?” they would be ignored or answered with, “¿Perdón? ¿Qué dijiste?”—Cardona is unyielding when it comes to her children’s education. “My husband and I are very involved in our kids’ education,” she says. “He jokes that I’m going to be ‘one of those mothers,’ to which I say, ‘Hell yes.’ I have the luxury to be one of those mothers. But many mothers, especially in the Hispanic community, are working two to three jobs or are punching the clock and can’t make it to parent-teacher conferences.” While Cardona recognizes that the coalition doesn’t directly address these obstacles in parenting, it does encourage the discussion of creative solutions to hold more than teachers accountable for the success of Hispanic students.

Where the coalition does take aim is the inequality of minority and majority education and expectations. For Hispanic students to reach the levels of achievement that will prepare them for the pursuit of STEM careers, someone needs to hold them to that standard. Currently, says Cardona, many are suffering purely from a lack of accountability. On a macroscopic level, this issue manifests in the disparity between a handful of schools—usually in affluent communities—with teachers, resources, programs, and curricula that reinforce STEM from an early age and the majority of schools failing to adequately prepare students or only preparing an exceptional few. On the ground, the way teachers interact with minority students can be just as detrimental.

Studies have shown that even a teacher’s subconscious estimation of a Hispanic or African American student’s potential can cause expectations to fall and achievement to follow suit. “If no one is pushing kids who have propensities in math or science, we’re losing opportunities,” she says. “The goal of the coalition is to train teachers not just to look for inherent talent, but to push students who come from all walks of life into the STEM careers, and we believe they’ll find those children living up to that expectation.”

Raising the Voice of the People

Hispanics bring an undeniably valuable perspective to every sphere of American life, from business to culture, but in institutional settings, such as schools and the office space, many are still uncertain how to raise that voice. Cardona herself, who has made a career out of speaking on behalf of her community, faced the same insecurity when she was coming up in Washington. Noticing the scarcity of people of color at the decision-making table, she asked her father how he got invited to the “circle of power.” “He said, ‘Mija, it never occurred to me to wait for an invitation. I just pulled up a chair,’” Cardona recalls. In turn, Cardona has encouraged the same for others, and the idea forms the rationale behind DSG and Latinovations.

At the end of 2004, Cardona found herself more than just an ambassador to Washington for the Hispanic community. Having just completed an extensive research project for the New Democrat Network think tank to compile Latino political leanings and create messaging directed at them, she was uniquely poised to help enterprises tap into the Latino community. “I was at a point in my career where I had a pretty powerful megaphone,” Cardona says. “I wanted to use it to shine light on the issues facing my community.” DSG takes a “campaign-style” approach to public affairs, which means Cardona is facilitating media, messaging, grassroots organizing, and lobbying for public, private, and nonprofit clients seeking the endorsement of America’s Hispanics.

While the recognition of Latino influence by DSG and Latinovations’ clients is the first step to raising the profile of the Hispanic community, Cardona stresses that it is not a monolithic community. And while her platform gives her the opportunity to speak for the group, she is encouraged by the enthusiasm she sees in the next generation of voices. “Some of the most rewarding feedback I get is from young Latinas who are proud to see another Latina on TV—not just discussing immigration or the Latino vote, but sitting up there with heavyweights on the economy, war, and politics, and as they say, ‘debating with old, white men and kicking ass.’”

Part of the responsibility that accompanies Cardona’s megaphone is having the courage to take a stance that may not align with the majority. It’s a diversity of opinions at different levels of the community that she says provides a robust debate, the vehicle that will allow Hispanics to traverse the crossroads at which they stand. “As Latinos, we need to figure out how to be the architects of our own future,” Cardona says. “That won’t happen unless our voices are heard, our efforts mobilized, and action is taken on the issues we care about.” Whether campaigning for immigration reform on Capitol Hill or helping their children memorize multiplication tables, the onus is now on Latinos. And as Cardona’s father would advise, there’s no more time to waste waiting for an invitation.

Dialogue From The Hill

A conversation with Maria Cardona

How do you remain true to your campaign promises?
Understand what your limits and parameters are. In a world where everything is compromised every day, you have to understand up to what point you’re willing to draw the line. As long as that is very clear in your mind, it’s not difficult to remain true to your core principles.

What is your best public speaking tip?
It’s a lot easier to get nervous or flustered if you’re speaking in a voice that isn’t true for you. Find a topic and be true to your voice. The audience will see you coming through, and genuineness is one of the most powerful tools when speaking.

What has been your most successful campaign?
Even though she didn’t quite succeed, I’d say the Hillary Clinton campaign was the most successful campaign I worked on. She broke so many barriers. She made it to so many levels that no other woman has. It was one of the most frustrating, exhausting, but also exhilarating, inspiring, incredible campaigns I have worked on.

What cause takes up the majority of your focus?
STEM jobs, education, and immigration reform. I think everything is tied to Latino empowerment. In every field, those of us who have a voice and can influence the national debate need to focus on ensuring that others lift their voices up as well. There is amazing power in numbers, and we certainly have the numbers.

Bitten by the Advocacy Bug

New Report: The Latino Contribution to US Economic Dynamism

Claudia Ibarra: “Never Give Up”