Using 3-D to sell Cablevision’s “Optimum Triple Play” of phone, television, and Internet services to the Hispanic market was a novel idea, but it also just made sense. “3-D had become a phenomenon among consumers, and TV stations were moving forward in providing 3-D offerings,” says Iñaki Escudero, global creative director for GlobalWorks Group, the New York agency behind the 360-degree campaign, which had 3-D spots running in movie theaters, on televisions, and online. “The consumer could be entertained by our ‘Optimum 3-D Adventure’ while also learning about the product features and benefits.”

The campaign—the first in 3-D targeting the Hispanic market—was a success by any definition. “You have to ask if you’re referring to success for the brand, success for the consumer, or success for the agency, and I think we hit all three,” says José Vélez-Silva, director of client services for GlobalWorks Group. 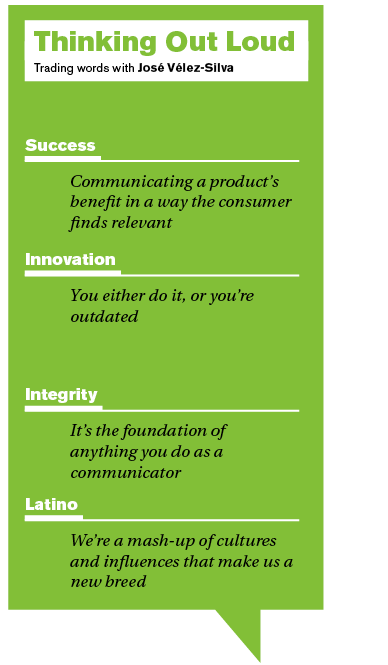 That’s a significant achievement in the relatively nascent field of multicultural marketing. Twenty years ago, in fact, Cablevision’s Optimum Triple Play 3-D campaign wouldn’t have existed. “In 1993, when I came to the United States to work in advertising, Hispanic research was scarce,” Vélez-Silva says. “In order to assess appropriate investment levels, corporations had to trust that there was a sizable market opportunity.”

Escudero says not much had changed a few years later, when he got his start in the industry. “Back in 1996, the ability to speak and write in Spanish would get you a job at a Hispanic agency. Today, the Hispanic market is the most complex, creative market in the world,” he adds.

What a difference a decade has made. Today, GlobalWorks, which was launched in 1999 with a multicultural and digital focus, has 80 marketing professionals that come from more than 30 countries and speak more than 25 different languages. Led by Escudero, who hails from Spain, and Vélez-Silva who was born in Puerto Rico, they create multidisciplinary advertising campaigns targeting in different cultures, including Hispanic as well as lesbian, gay, bisexual, and transgender (LGBT), African American, and Asian.

One key to the agency’s success has been relationships—not just with clients, but also with consumers. “We’ve created relationship marketing communications instead of just advertising communications,” Vélez-Silva says. “The difference is a two-way communication between the product and the consumer, which speaks in a way that resonates and it is extremely relevant.”

A good example, says Escudero, is the agency’s efforts to promote US Bank’s savings campaign. “Instead of holdings castings with professional actors, we made it our purpose to put real consumers in front of the camera—people who were already thinking about savings—so they could speak authentically with consumers who have similar needs,” he says.

Although GlobalWorks Group has certainly succeeded so far, the two partners note that staying on top requires staying on their toes, given the eclectic nature of the Hispanic market. Escudero explains speaking the language of the consumer is an ongoing challenge because the Hispanic market is a mix of cultures and influences that is constantly evolving. “Hispanics are cultural brokers,” he says.

“We know the key to success in our industry is to be nimble and our unique knowledge of cultures. We know cultures in all [their] complexities.”

Whatever changes come, however, Escudero and Vélez-Silva are confident they’ll be able to remain ahead of trends. The executives, who have worked together seamlessly at GlobalWorks and in past positions, know what it takes to succeed. “As an agency, we know the key to success in our industry is to be nimble and our unique knowledge of cultures. We know cultures in all [their] complexities,” Vélez-Silva says. “That understanding leads us to emotionally connect with consumers in an authentic manner. Placing our digital capabilities into the mix, we build cross-platform communications for brands establishing symbiotic relationships with consumers and delivering messages in the way they have become accustomed to. That’s what sets us apart in our industry and how we build brands without borders,” he adds.