A career in law was a natural choice for Joe Ramirez, vice president of licensing and associate general counsel for Adobe Systems Inc., a San Jose-based software company. “When I was a high-school senior, the guidance counselor asked me what I wanted to do with my life, and when I said I wasn’t sure, he handed me a big vocational book and said, ‘Take it home, read it, and come back in a couple of days and tell me what you think you should do with yourself,’” Ramirez says. “I really did that, and of all the careers I could choose from, law fascinated me for two reasons: You have to love to read, which I do, and you have to love to argue, which is inherent in my family.” Ramirez shares with Hispanic Executive his unusual career path.

Is there any one thing that you would say defines you professionally?
I know how to do a lot of different things. There are plenty of lawyers who are better at law than I am, but few lawyers are better at business, because I’ve been exposed to so many areas of business over the years, from operations to sales. That allows me to look at things from a different perspective.

How did you gain that experience?
When I first interviewed at Adobe in 2003, Jim Stephens, who was then executive vice president of sales and field operations, looked at my résumé and said, “In the past 15 years I’ve been at Adobe, and you’ve had about seven or eight jobs.” It’s true: I worked at a Fortune 500 company, National Semiconductor, a multinational information-technology equipment and services company, Fujitsu-ICL Systems; a small engineering firm, Quadrex; even a start-up. Sometimes the tenures were short, but I always learned a lot. 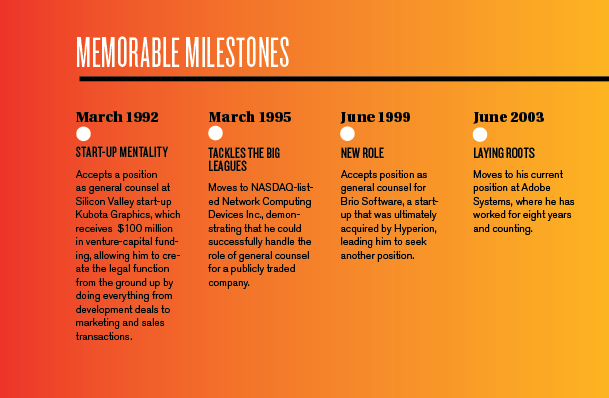 Is there a single position that has stood out?
Prior to joining Adobe, my second job out of law school, with National Advanced Systems, a company that sold memory and storage devices, stands out. It was owned by National Semiconductor, and at that point you couldn’t ask for a better company. The Wall Street Journal once called National Semiconductor “the animals of the Silicon Valley.” There was no hierarchy; they pretty much let you do what you wanted to do. It was such a joy to work there, and I learned so much, doing all sorts of sales deals. That opened all sorts of doors for me. It was Silicon Valley in the early 1980s, so I was in the right place at the right time.

Was there ever a significant turning point in your career?
When I left National Advanced Systems, I took my first general-counsel job at a company called Masstor Systems, which had 17 straight quarters of losses. It was the worst and best experience of my life. On one hand, the company started a rebound for about 18 months and then, due to an executive shakeout, ultimately ended up going in the wrong direction. But working there, I gained confidence in my abilities, and learned what I bring to the table. I have a lot to offer, and my unique skill set can take me far.

How does someone who thrives on change end up staying at Adobe for eight years and counting?
I joined Adobe because I had worked for a number of start-ups, and when the last one, Brio Software, was sold, I wanted to see if I could I make a difference at a larger organization. I ultimately stayed at Adobe because they’re always innovating. That carries over to what I do because I’m always asking how we can improve things; I’m a change agent. The lawyers are kind of like salespeople here. We’re selling stuff; we’re just doing it differently.

José Vélez-Silva and Iñaki Escudero are Anything But Two-Dimensional