Jeremiah Bitsui is always trying to empty his pockets. Literally and figuratively, he does so much like an athlete, with about 50 percent superstition and 50 percent strategy. “It probably goes back to an audition where I had my phone in my pocket and the anxiety it caused,” says the actor best known for his portrayal of Victor on AMC’s Breaking Bad. Whether he’s mentally preparing for a character read, sizing up a construction project, or penning scenes for his next screenplay, the actor-entrepreneur makes a conscious effort to assess every opportunity without preconceptions, to clean his slate. 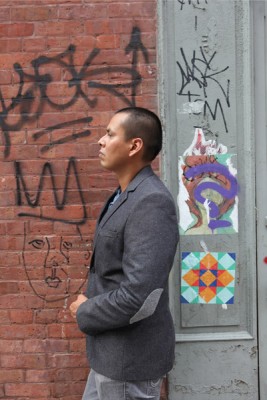 Bitsui is recognized on the street for his role on the award-winning AMC series full of drugs, drama, and dastardly types, of which Bitsui’s character was one. Coming from a college-educated rodeo family, Bitsui’s less-publicized business includes BITCO Corporation, a construction firm he operates with his father dedicated to improving communities with its projects and business practices. When he was just 18 years old, Bitsui started his first business, Youth Impacting Youth (YIY), a soft-skills training program aimed at teens preparing for college.

Every endeavor Bitsui has pursued has been a self-made opportunity. It’s a reality that is both freeing and potentially paralyzing. When you are the coach, competitor, and keeper of the score, how do you measure progress? Bitsui answers these questions with a few of his own, and if you listen to the way he poses them with the unassuming tone of an actor aware of the ephemeral nature of fame and still trying, just as hard as the next person, to figure it all out, if you can remove him from the limelight in which his theatrical résumé casts him, you start to understand that a celebrity is the last thing Bitsui considers himself.

He muses as he discusses self-assessment, the skill that perhaps more than any competitive advantage or method acting, has seen him through a “quarter-life crisis” and creative travails alike. “If you make a financial goal, and you miss it by a dollar, did you actually fail?” he asks. “And if you had met the goal, how fulfilled would you feel, and how long would it last? A lot of people think that one more goal, that one more car, all the nouns are a measure of success. There’s nothing wrong with goals, but the more important thing is realizing how you met them. I’m starting to realize replicating what you did before—like that second take—is so crucial.”

The “second take” to which Bitsui refers, like many of his philosophies, manifests itself literally and metaphorically in his multiple lines of work. On the set of A Thousand Roads, a short film produced by the Smithsonian National Museum of the American Indian, Bitsui learned how crucial that skill of replication is. The camera captured a wide view of an old sedan parked at a crossroads in the New Mexico heat. Bitsui, portraying Johnny Chee, a wayward Navajo youth, was in the passenger seat. Another car pulled up, and its driver brandished a gun. Using his own experiences and the emotions they conjured, Bitsui fumbled for Chee’s gun with the vulnerability and hostility the character demanded. The director loved it, high-fived Bitsui, then ordered another take just for tighter detail. But before Bitsui could deliver a repeat performance, one of the other actors fainted.

“My heart totally changed,” Bitsui recalls. “I had this surface-level anger I had built up for the character, and seeing this fellow actor so vulnerable changed a lot of that. I wasn’t able to get to the same place emotionally as I had before.”

After a few tries, the director suggested the crew move on. “It’s a very unromantic thing to admit, but acting is very technical,” Bitsui says. “After that, my methodology changed.”

Mistakes have been a part of Bitsui’s career—whether it be the way he thought his experiences and emotions made him uniquely able to connect to his character or the false sense of longevity he rested on just before YIY folded. But he isn’t running from them, at least not anymore.

Youth Impacting Youth began with a bang and ended like a whisper. Within four weeks of putting the leadership and goal-realization suite on the market, Bitsui and his partner at the time had made enough money to satisfy their first goal: pay for college and a few months’ rent. With primarily government-funded clients, it seemed the business was fail-proof. But the year Bitsui really felt like he was on top of things, the United States went to war. “I thought it was impossible for our clients to disappear overnight,” says Bitsui, almost laughing at the hubris of his younger self. “But the moment you start thinking you’re the master of something is when you make yourself most vulnerable.”

The making  of BITCO

Jeremiah Bitsui was not a child-star-turned-actor, but he did get his first taste of the family business when he was just a kid. Since age five, Jeremiah tagged along with his father, Edison Bitsui, who brought the boy along to construction jobsites. The two went into business together, forming BITCO Corporation, which paired Edison’s industry experience—he built facilities in Navajo Nation for more than two decades—and Jeremiah’s entrepreneurial spirit.

Today, BITCO has teamed up with Kitchell, another Native American construction company. The joint venture prides itself on projects that respect the sovereignty of Indian nations’ customs and laws. In 2010, while working on a school in Rough Rock, Arizona, the firm contributed to the restoration of a nearby Native home that had been vandalized. Whether building a school, a house, or a casino, the firm stands firm on the belief that each must positively impact the Native community.

The end of YIY was only the first in a string of hard lessons Bitsui would learn. In what he describes in retrospect as “a bad country song,” a series of misfortunes—including a breakup with his girlfriend, the death of his dog, and rejection from graduate school—knocked Bitsui to the depths of disappointment. When his maternal grandmother’s passing topped the list, he didn’t know where to go. “I was just hurting,” he says. “I almost didn’t care at one point. I decided to go back home and hit the reset button.”

Joining his paternal grandparents on their northern Arizona church-ranch, Bitsui found contentment. Having left behind every effect of his chaotic, California life, from his cell phone to overdue library books, he began to imagine the rest of his life not hindered by the confusion of schedules and technology and “all the goals, the things I kept trying to reach,” he says.

And had Bitsui not visited his parents for lunch one serendipitous summer day in 2005, he may not have been cast in Lords of Dogtown—the role that reignited his acting career. Upon returning home, everyone he hadn’t told about his retreat to the ranch wanted to see him—particularly the assistant of the film’s director. It took some convincing, but Bitsui’s family talked him onto a plane to Los Angeles, and when a second call came for follow-up work, Bitsui began to convince himself that it wasn’t an anomaly. “I started to realize, this is my life,” he says. “This is the direction I’m supposed to go.”

When Bitsui began relinquishing some of the control he had been trying to impose on his fate, he primed himself for the serendipity that would be the catalyst for his comeback. He adopted a mind-set that allowed him to work, grow, and create in a way he hadn’t before: with acceptance. “The biggest realization I’ve made is that I’m a spoke in the wheel,” Bitsui says.

Whether on his team at BITCO or as a character in a film, Bitsui has come to recognize his role as a medium, a storyteller, through which a greater vision is executed. It is not his thumbprint that he strives to leave on projects; but upon those who experience his work, in whichever form it takes, he hopes the finished product leaves an impression of its own. Bitsui hasn’t thought of himself as a master in years, and believes that is the key to his career. By taking himself off a pedestal, Bitsui liberates himself to continue learning. In his self-reflection, he has learned the value of selflessness.

“Nothing is sacred,” Bitsui says. The words are his mother’s, the source of much of his wisdom. “When you first hear that, it sounds so dark, but I’ve realized that when I can take myself out of the picture, I make the right decisions. When you start looking at things from that standpoint, your life becomes enriched because you’re not worried about your own relevance, your own security, or whether the next project will come through. Your concern is other people, which is essential in every realm—in business, in acting, and especially in life.”