Gabriel Blochtein Burd, 28, embraces the cosmopolitan lifestyle. Originally from Brazil, Burd has traveled to more than 20 countries on four continents, and has worked in at least five of those countries (in three continents). His international résumé includes stints in India, Japan, and South Korea. He currently resides in the Netherlands, working for a global paints-and-coatings company and specialty-chemicals producer. 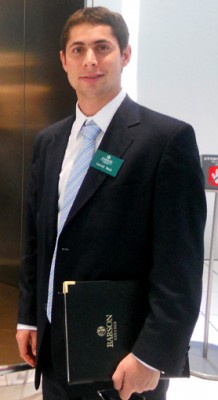 To develop a career in general management at a multinational organization. Long term, I aspire to become the CEO or the head of a division in a global company.

Although I am happy in my current position and not on the job hunt, my international experience as a generalist professional provides me with the flexibility to achieve outstanding performance among diverse job functions and industries.

May 2010–May 2011: Executive VP for the Graduate Student Council Babson (United States)

Role model
Samuel Burd
My grandfather, Samuel Burd, who passed away recently. He worked for more than 50 years for the Jewish community in Brazil and founded and managed institutions, associations, and synagogues, among others. He believed the strength of the community and young people could change the world.

Dream job
VP of Human Resources for a Latin American company
My dream job is to work in a leading company that embraces entrepreneurial thinking, integrity, and responsibility in its core values.

Define success
To achieve my personal and professional goals with integrity, determination, and hard work.