As the number-one US wireless-services provider, Verizon Communications Inc. owes much of its success to the millions of subscribers who turn to the telecom company every day for virtually all of their communication needs. Among those millions of subscribers are an increasing number of Hispanics, African-Americans, and Asians whose communication needs continue to evolve. To best reach this market, director of multicultural marketing Oscar Madrid has led his team in project efforts specifically designed to reach these groups with Verizon’s growing fiber-optic suite of services for television, voice, and Internet. Hispanic Executive sat down with Madrid to discuss specific initiatives he has worked on since joining the company in 1989 to better engage the ethnic consumer.

1. Training Course
Several years ago, during a trip to a Verizon store in California, Madrid witnessed firsthand the struggle that some Verizon staff had communicating and selling to a long line of Spanish-speaking customers. “I was watching how adolescents were there acting as interpreters, and how essential it was to give our employees insight into this particular culture,” Madrid says. Soon after, Madrid developed a company-wide training course to better educate employees on how to best sell to the Latino segment, helping to “build strong relationships and trust between this important customer segment and our employees.” 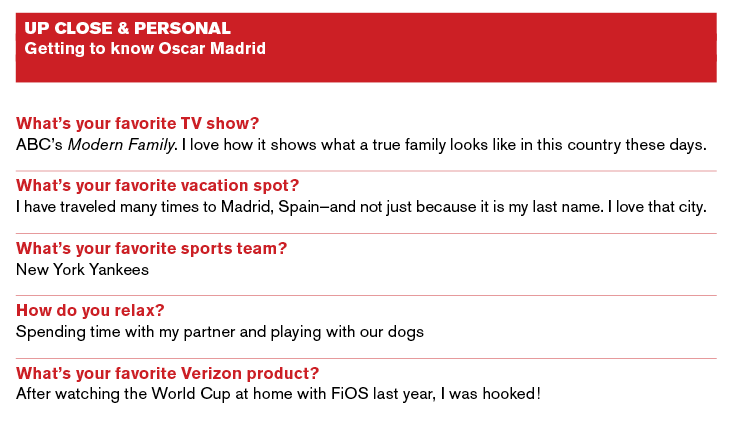 2. Expand FiOS Offerings
With its triple play, or “bundle” offering of fiber-optic television, Internet, and voice, Verizon FiOS was specifically designed to cater to the customer looking for a breathtaking picture, ultra-fast Internet speeds, and reliable voice service. Yet, Madrid also saw a way to expand on the FiOS offering to better reach the Hispanic-consumer marketplace. “Our studies showed that the Hispanic consumer did not want some generic bundle of programming with a Spanish component added on,” says Madrid, who is active with the Association of National Advertisers and lectured in the past at the US Hispanic Marketing Conference. “They wanted the whole package deal. It was also important to deliver a wide range of Spanish and English programming. They didn’t just want the Univisions and Telemundos of the world. They wanted networks like Nick Jr., also, to satisfy the needs of the entire family. With multiple generations coming together to watch television, a true mix of programming was key.” Last year, Verizon FiOS launched La Conexion, a bundle that includes TV, Internet, and voice service and over 30 of the most popular Spanish channels.

3. Marketing to the Ethnic Population
Utilizing online/digital marketing and microsites with multicultural testimonials to get people to click on banner ads, Verizon has embraced the fact that Latinos are more socially engaged online than their general-market counterparts. As they are currently in the midst of building their multicultural social-media platform, they continue to look for ways to evolve. “We recently launched a new microsite (enciendetefios.com) designed to ensure our consumers understand [the] ever-expanding capabilities of our fiber-optic network,” Madrid says. “We did some focus groups at the beginning of the year, and it was amazing to listen to these parents who have the Verizon FiOS internet service in their home, and they spoke of it like it was their very own badge of honor. It certainly hits home, especially with me.”

4. Quinceañera Contest
Madrid and his team recently announced details of a contest, specifically designed with the Hispanic consumer in mind. The website myfabulousquince.com details a contest in which current 14 and 15 year olds can submit essays as to why they deserve an all-expenses-paid quinceañera. Verizon plays a crucial part in the contest, participating in various community events surrounding the contest and putting on expos featuring local vendors such as bakeries, dress designers, and photographers.

Hitting the Nail on the Head