“Be willing to get down in the trenches—you have to understand what people go through.”

Dr. Elsa Murano was told that four years in Washington, DC, would feel more like 20—and after serving a term as the highest-ranking food-safety official in the US government during the George W. Bush administration, she’s inclined to agree. But the time she was compelled to stand up to big business—over the potential recall of millions of pounds of E. coli-tainted ground beef—still shines through the blur of pressure-cooker days she endured.

“We were talking several months’ worth of production,” Murano remembers easily, noting that the company in question brought quite a contingent of people to Washington to discuss the case. She gave her recommendation, and the company’s head legal counsel balked, declaring he’d be advising the company to ignore it. “I said ‘Well, that’s certainly your choice, but then what I’m going to do is put out a national food-safety alert telling that this company refused to recall its product,’” she says. “And my staff all looked at me like, ‘You’re kidding me! Wow!’ Because they realized I wasn’t just a political appointee—I cared about my work like they cared about their work. It was definitely a defining moment.”

Be an extremely good listener.
Before you get too enamored with one of your ideas, you need to bring it to your team and listen very carefully to what they’re
saying.

Fifteen minutes after the meeting concluded, Murano received a call from the company’s CEO assuring that they would, in fact, be issuing the recommended recall. A major moment, it was one of many that define a career that keeps taking her around the world and back again, determined to make it stronger and safer in her own way with each pass.

It was a deep desire to impact people in a direct manner that led the Cuban-born Murano to study microbiology at Virginia Tech—specifically anaerobic microbiology (in which she holds a Masters), and food science and technology (in which she holds a PhD). Determined to keep learning about the creation and prevention of food-borne illnesses, she started her career as an assistant professor at Iowa State University. A mere five years later, she joined the staff at Texas A&M University both as an associate professor and as director for the school’s Center for Food Safety—displaying a penchant for leadership that was decades in the making.

“I’ve always been a very observant individual,” says Murano, citing this trait along with a natural sense of organization with seeing her through administrative roles with a certain peace of mind. She also credits books such as Jim Collins’s Good to Great and John C. Maxwell’s 21 Indispensable Qualities of a Leader with her development. “When friends of mine were at the airport and they were picking up fiction to read on the plane, I was reading these kinds of books instead,” she says. “They were like manuals on how to get things done.”

In fact, Murano had only been at Texas A&M for six years when the aforementioned Washington, DC, opportunity came calling. The George W. Bush administration needed an expert to serve as the undersecretary for food safety at the Department of Agriculture. A candidate who was keenly aware of a seemingly endless stream of E. coli-related national beef recalls, Murano accepted the position and served in it from 2001 to 2004. She made food-borne illnesses the centerpiece of her tenure, with goals to reduce them in key amounts by 2010. The targets for E. coli illnesses, indeed, were met six years ahead of schedule. “There used to be a big recall done every three to four months back then, but you hardly hear about them at all anymore,” she says. 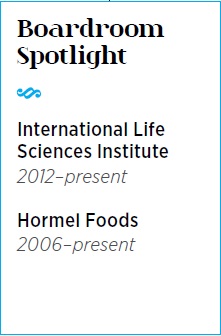 Successes aside, Murano was ready to return to Texas A&M by the start of 2005. “It was a difficult job to do because so many different people demanded certain things,” she says of her time in Washington. “Consumer groups, the meat industry, the media, Congress holding our feet to the fire, the White House similarly so. But I had to be able to sleep at night.”

It was just a few years upon rejoining the university that Murano found herself in an all-new position of leadership—president of Texas A&M, effective January 2008. In doing so, she became not only the first woman and first Hispanic to hold the job, but also one of the youngest in the institution’s history. Though she only held the position through June 2009, her contributions were noteworthy.

After her tenure as president, Murano returned to a full-time focus on food and food safety. This passion has manifested itself in numerous ways, particularly with regards to Murano’s position on several boards, but some of her proudest achievements to date stem from her work as director of the Borlaug Institute. Taking its name from the Nobel Peace Prize-winning “Father of the Green Revolution,” Norman Borlaug, the institute is about fighting hunger and poverty on a global basis by educating and empowering developing countries via sustainable farming methods and helping to create value-chains for small farmers.

Projects overseen by the institute in the Congo, Ethiopia, Indonesia, Guatemala, and South Sudan, among others, focus on training, agricultural practices, and business organizational skills. “It’s the right thing to do,” Murano says. “We are put on this world to help each other. So how can we not try to do what we can do when we see people less fortunate than ourselves, and we can help them? And when we help the farmers in a country that becomes successful, we as a nation have a new trade partner. We’ve taught them how to fish, if you will.”

Or a living from growing coffee, as Murano explains by way of a favorite success story involving the survivors of Rwanda’s 1992 genocide. “The women had to start over after their husbands were killed, and we’ve helped them both with growing the coffee plants and organizing into cooperatives,” she says. “They grew the coffee, they picked it, and we set up some washing stations so they had a high-quality product. Then, they started selling them directly to international buyers. Long story short, they now sell to Starbucks!” she marvels. “It’s an amazing story. They’re businesswomen now!”