VP Elias Reyna on how his life experiences and background have motivated him to foster an inclusive environment at Papa John’s International Inc. 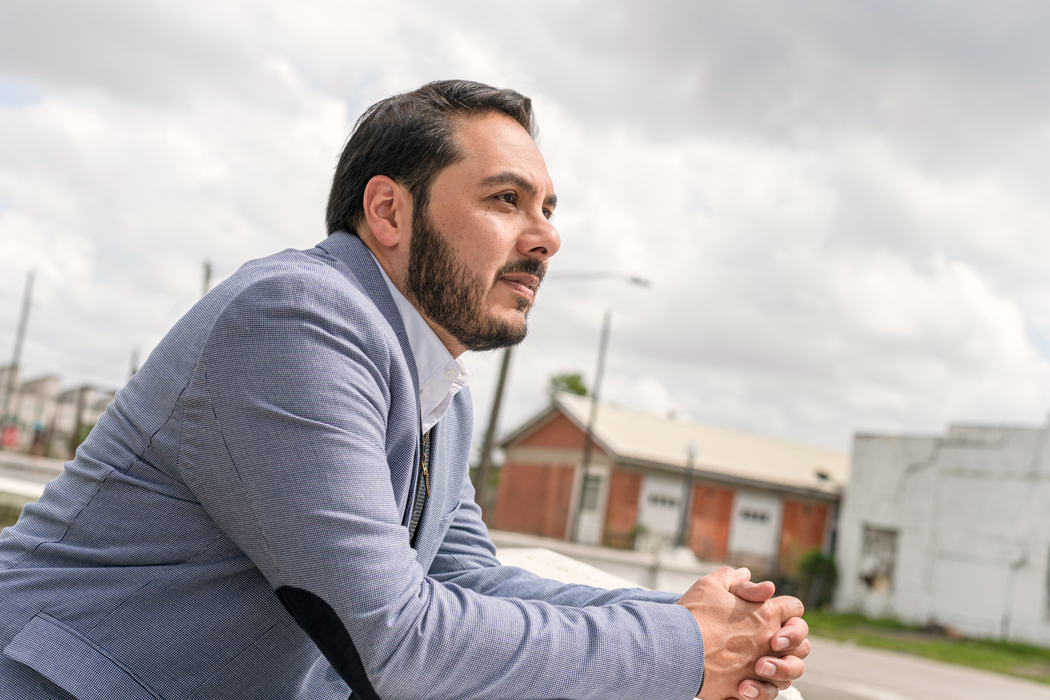 Photo by Alicia Elatassi and Jamaal Jones
By Dan Caffrey

“Cheese,” I tell him somewhat sheepishly.

I wish I had a better answer, but I can’t lie. I grew up eating the pizza chain’s simplest flavor at school, home, and Little League practice. To me, a slice of Papa John’s cheese pizza—dipped in a small plastic tub of their trademark garlic sauce—tastes like childhood.

Reyna laughs and assures me that cheese is a great choice. It’s ubiquitous. It’s time-tested. You can’t go wrong with cheese.

On one hand, Reyna and I are just bantering—the question being something of an icebreaker as we get to know each other over Zoom. On the other hand, the flavor question sits at the foundation of his philosophy as an HR professional. Since his arrival at Papa John’s in April 2020, he’s asked it of all of the company’s employees—the idea of one’s flavor being a metaphor for inclusivity.

“We’re all about fostering a sense that everyone belongs,” Reyna says. “We incorporate that into our culture on a daily basis. We’re unlocking the voices of our team members and want them to bring their authentic selves to work. Yes, we’re dedicated to delivering better pizza, but only by putting people first.”

The “flavor” metaphor becomes literal on a daily basis at Papa John’s offices, which are each outfitted with a pizza kitchen: there, team members regularly get to test out new products and flavors. Of course, the company works in a number of other ways to promote an inclusive environment in the workplace.

And those efforts are gaining recognition: Papa John’s recently received a score of one hundred on the Human Rights Campaign Foundation’s Corporate Equality Index, the country’s foremost benchmarking survey measuring corporate policies and practices related to LGBTQ workplace equality. It was the only pizza company and one of only forty-two companies in the Food, Beverage, and Grocery category to earn a perfect score.

Currently, Reyna’s work is heavily focused on bringing this kind of supportive environment to the new Papa John’s headquarters in Atlanta. Slated to open in summer 2021, its unveiling will come on the heels of the company’s re-opening of all their other HQ buildings as the COVID-19 pandemic begins to wind down. Reyna is handling everything from safety and health guidelines to training and building out a diverse talent base with new hires.

“It feels like a return to school, a return to the office, and a grand opening all happening in parallel,” he says.

The new headquarters and numerous re-openings mark a milestone in Reyna’s time at Papa John’s, given that he was hired during a time when he and his colleagues weren’t able to meet in person. He’s managed to persevere in a most difficult year and push his team members to do the same, which he says comes down to the importance of staying rooted, of remembering where your inner strength comes from and of what makes you you. In Reyna’s case, he finds a great deal of inspiration in his background and family.

“I’m proud to be a second-generation Mexican American,” he says. “My grandfather migrated here and was a migrant farmworker on the West Coast, then brought his family to East Texas during the 1950s. He made a big impact on me when I was growing up, just seeing the sacrifices he made so that his loved ones could have a better life. I consider him to be one of my true role models.”

“We’re unlocking the voices of our team members and want them to bring their authentic selves to work.”

As Reyna was growing up in the Galveston, Texas, area, he got to spend a lot of time with his grandfather, standing by his side as he built storm blinds and window screens. Even when the family patriarch was diagnosed with pancreatic cancer, he continued to work.

“That was one of those informative moments for me,” Reyna says. “It taught me a lot about how to deal with adversity.”

Reyna ended up having to go through a similar struggle in his own life. Right before starting college at the University of St. Thomas in Houston, he was diagnosed with a severely aggressive bone tumor. Dropping out or delaying his education would have been completely understandable. But remembering the work ethic and strength of his grandfather, he decided to stay enrolled as he underwent medical treatment. Not only did he manage to finish on time—he immediately started working toward his MBA after graduation.

Today, Reyna draws from his experiences to inspire others both at Papa John’s and at the Boy Scouts of America, where he’s been a scout leader for fifteen years. He and his wife of twenty-three years have three boys, who are ranked First Class, Second Class, and Eagle Scout.

“It’s been amazing to see my own children grow through that experience,” Reyna says. “And as a leader, it’s so fulfilling to see how much of an impact you can have on a young person’s life.”

Like everyone else at Papa John’s, Reyna is his own distinct flavor, made up of life experiences that are unique to him and him alone. And there’s plenty of room for everyone’s story.

“That’s what I want to foster in others,” Reyna says. “Everyone has a seat at the table.”

The Opportunity Inherent to the COVID-19 Pandemic