There is no cure for chronic kidney disease, but DaVita Inc. of Denver wants to make life easier for the 20 million people who suffer from it, and in particular, the nearly 450,000 with end-stage renal disease who receive dialysis three times a week. Only a kidney transplant can restore kidney function and end a patient’s need for dialysis treatments.

“Many of these patients are very sick,” explains Javier Rodriguez, president of the $7 billion Fortune 500 firm. “When you have a chronic disease and you are going for treatment three times a week, you really get to know your care team. You form a relationship with them. They essentially become an extended family. Quality care makes an immeasurable impact on our patients’ quality of life.”

To make that relationship the best it can be for the patients, DaVita, which has nearly 1,900 dialysis centers, including 15 outside the United States, focuses heavily on the education and development of its teammates (employees).

“We take pride in making a big investment in the education of our teammates,” Rodriguez says. “We don’t know of another health-care company that invests as much in its teammates from profit sharing to personal and professional development.”

“For instance, we have a two-day retreat we call DaVita Academy. The primary focus is on personal and professional growth, things like conflict resolution, effective teamwork, and developing a personal credo. It’s all about focusing on how you can be a better overall human being. It is this link of personal and professional development that makes our caregivers more fulfilled, thus creating a better environment for our patients,” he adds.

As president, Rodriguez’s responsibilities run the gamut from acquisitions to information technology to building relationships with insurance providers. But he is most passionate about quality of care and enhancing the quality of life for DaVita’s patients and teammates. Dialysis equipment, Rodriguez explains, is pretty standard, “so the people and experience is what differentiates us.” DaVita works to align itself with the best nephrologists in the country, and to intensively train its nurses, technicians, dieticians, and social workers. “Altogether, we provide a holistic experience to make sure our patients are receiving the best care possible and to help in every way we can.” 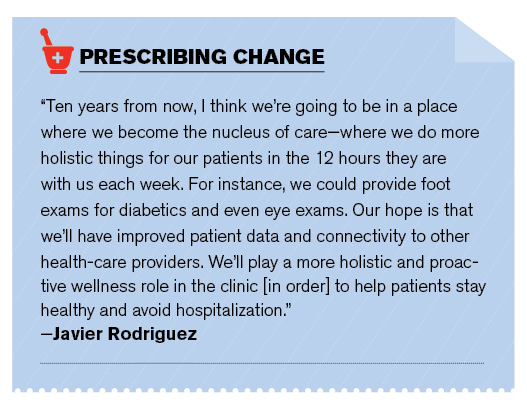 One of DaVita’s seven Core Values is “continuous improvement,” and nowhere is that pursued more relentlessly than in patient care. One example of DaVita going above and beyond for its patients is vaccinations, with more than 90 percent of patients receiving vaccinations for pneumonia and influenza. Vaccinations significantly impact patient hospitalization rates, helping patients stay healthy and saving taxpayers millions of dollars.

Another is the access point where blood is drawn for dialysis treatments. In 2008, DaVita launched a program called “CathAway” to reduce the number of patients with catheters, which are highly prone to infections. Instead, DaVita actively promotes the use of fistulas, which fuse an artery and vein to create a super access point in the forearm. “For people who go to dialysis and have their blood circulated through an artificial kidney, one of the most important things is the access point,” says Rodriguez. “Fistulas cut down on infections and blood flows better through them.”

As one looks into the future, Rodriguez and DaVita will face the same challenges that face the broader health-care sector: connectivity, coordination of patient records between providers, and transparency of information so patients can make informed decisions. DaVita is confident that it will be leading the way.

Rodriguez, who joined the firm as a director in 1998, was promoted to president in February 2012. “We were going through a tough time back then,” he says of his early years at the company. “We had grown quickly and did not integrate the companies well. Both the soul and the economics were bankrupt.” Then in late 1999, there was a new leadership team and the teammates pulled together to come up with a new name for the company, DaVita, which means “giving life” in Italian. “We’re the only major health-care company we know of where teammates chose the name,” Rodriguez says.

To turn things around, DaVita focused on culture, creating a values-driven workplace where teammates care for each other, as well as their patients, and hold themselves accountable.  Today, Rodriguez says, the company is a great turnaround story, having grown from 600 clinics to nearly 1,900 and expanding internationally.

Rodriguez is active in the Young Hispanic Corporate Achievers group through the Hispanic Association on Corporate Responsibility. He advises Latinos to develop relationships with people that will stretch and challenge them at an early age. “The kind of people that don’t tell you what you want to hear, but what you should hear,” Rodriguez advises. He also encourages aspiring executives to take on challenging projects, take measured risks, and take ownership. “One of the things we say at DaVita is ‘no one washes a rental car,’” says Rodriguez. “We want people to be citizens of the DaVita Village, not simply residents,” he adds.

Earlier this year, DaVita merged with Health Care Partners, the country’s largest network of medical groups and physician networks. The merger will help the company achieve its goal of taking care of the whole patient. “They deliver proactive, integrated care, with the key goal of improving the health of its members. That significantly reduces hospitalization rates and health-care costs. We want to learn from them about providing integrated care,” Rodriguez says.