Photo by icarmen13 on Adobe Stock
By Maria Fernanda Reyes

“Would the real Maria Fernanda please stand up?”

I write this article as I sit on a flight to my late father’s hometown of Zacatecas, Mexico. And had he not instilled certain values in me, I would not be writing a single word. Writing about this experience is one of the hardest things I’ve had to do. But I’m currently sitting next to Veronica Sanchez from Napa—a fellow woman of color, originally from Mexico—and that helps me remember why it is so important for me to write this.

“Would the real Maria Fernanda please stand up?”

Just writing that phrase takes me back. In June 2021, I was giving aid to Mayan communities, particularly children and elderly individuals who had no access to basic things like clean water. As a child, I always believed in helping others. My abuelos came from Indigenous roots: my Grandpa Pepe was one of the best epidemiologists in the country and spent most of his life eradicating illnesses in Zacatecas, and my Nena Reina, who brought me up, taught me that you are only as good as your ability to serve others.

During my trip, I was invited to attend an event held in recognition of Kamala Harris’s first visit to Mexico as the US vice president. Looking back, I am very grateful for what happened because—in the same way that my grandparents created waves of change—I had a chance to give people in our community a voice, whether they are a farmworker, nurse, doctor, entrepreneur, or an undocumented immigrant. But at the time, it was very difficult.

Part of the event was a press conference, and while I am not a member of the press, I wound up at the conference through a series of unlikely events and was asked by one of the organizers to pose a question to the vice president. I was put on the spot: I didn’t have a chance to plan my question. But I sent up a prayer, asked all my ancestors and God to guide me in asking the right question, and nervously but bravely asked Vice President Harris what everyone wanted to know. What millions of farmers, Indigenous peoples, mothers, minorities, and students wanted to hear from the VP.

“What would you say to these women, those mothers and also women of color on both sides of the border, farmers, many of them [whom] I see every day, as a message of hope, but also what will you do for them in the next coming years?”

I voted for you, I told the vice president. What will you do for us?

She gave me a seven-minute answer, but the organizers realized that I was not a reporter and soon called for the “real” Maria Fernanda (a Univision reporter of the same name who was not actually at the press conference) to come forward. After the event ended, a video was posted about the incident, and more than two million people watched it. About 80 percent of them were on my side, but it was still one of the most challenging moments of my life.

Do I regret having spoken up? I ask myself—did MLK or Dolores Huerta ever regret speaking up? Most importantly, do my grandparents regret everything they ever did to help our communities?

The answer is no. They all faced challenges, criticism, and attacks, but they did what was right. And in this day and age, we sometimes forget to do what is right. We forget that the strength of the US economy increasingly relies on minorities, and that in this post-pandemic world we now have to unite in order to innovate, elevate, and integrate.

And yet, the media has a lot of power. Depending on who you are, the color of your skin, and the words you use, you can be attacked for asking the right questions. So we have to be willing to be uncomfortable if we want to realize change. Change takes work. It’s painful. But more and more leaders are standing up and making a difference. I love to see people like Guillermo Diaz, Tom Chavez, Monica Lozano, Sandra Campos, and my friend Arturo Elizondo changing the perception that many have of us Latinos.

I don’t explain all this to feel sorry for myself, or to gain sympathy. I tell this story because like MLK, we Latinos are dreamers—and we are making that dream happen. We are elevating and moving this country forward, and no one can deny the pivotal role we play in the economy, the business world, the government, and every sector in between.

I hope that sharing my story helps other Latinos remember that we do belong in these rooms, and that our questions and voices do matter. Speaking up may have cost me countless nights without sleep—I talked to Fox News, the Washington Post, the New York Times, and so many other news outlets—but if it helps our community recognize what they deserve, then it was all worth it.

Maria Fernanda Reyes is a third-generation farmer born in Mexico with over twenty years of experience in the agriculture industry. She led global process improvement for Cummins Inc. and then moved to help oversee her grandfather’s farming operation. She then joined one of the first microbial biological agriculture input companies, enabling its expansion into the US and across the globe. During that time, she developed relationships with the whole supply chain and became known as a thought and industry leader in the agtec space.

Reyes is also a regulatory tech expert, having registered microbials with over ten countries (including all US states) in order to remove barriers to entry. With a knowledge of four languages, she has also gained farmers’ trust in many countries and wishes to continue helping farmers become more sustainable, reach carbon net zero goals, and be more profitable. She was admitted into Stanford GSB on a scholarship for the most influential Latino entrepreneurs in the country and was awarded the HITEC100 award for most influential Latino executive in technology. She is also the president of the Women’s Economic Forum in New York.

Reyes launched a nonprofit organization (AdoptaHero) to support frontline heroes as well as Indigenous populations that lack access to medical care, for which she was awarded the National COVID 2020 Superhero award by the WHO and the Hispanic Star in Action by Stanford University and the We Are All Human Foundation. Most recently, she cofounded FarmX LLC, a global multistakeholder technology platform that aims to solve the broken food chain by elevating farmers and connecting them to businesses in a sustainable way. 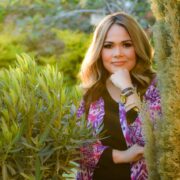 Maria Fernanda Reyes is a third-generation farmer from Mexico as well as a leader in regulatory tech, entrepreneurship, nonprofits, and advocacy