When Roman Vega was growing up in Newton, Kansas, he never imagined he would end up as the vice president of brand management for the Orlando Magic. But thanks to a healthy home environment and an active sports career, he learned how to push himself in the world of business. Now, he helms a 37-person crew and steers one of pro basketball’s hottest teams as they figure out how to present the game’s life lessons to the public. HE sat down with Vega to find out what makes him tick and to trace his journey from his small hometown in the Midwest to the hot seat in Orlando.

To set the stage, what does a typical day look like for you?
I oversee three things: Brand management, which consists of interactive marketing, social media, and creative services. It’s like an in-house agency. The second is game and event presentation—the type of music, the dance team, the mascot, the flow, the types of marketing messages you hear. The third is broadcast production, [which consists] of all the video and digital content that’s created in the arena.

I’m the “coach.” I have to figure out how to motivate my team, and not everyone is going to be motivated in the same way. That’s the beauty of diversity in the workplace. Being a good manager and a good leader is understanding how to motivate and inspire your employees to do their best work. 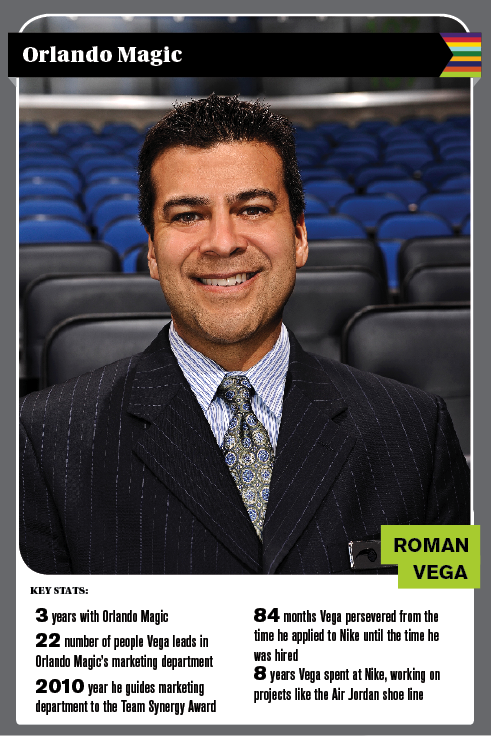 What role did your heritage play growing up in the Midwest?
My parents were second-generation Mexican (and Spanish), so Spanish wasn’t really spoken in our home. I remember going to my great-grandparents’ house, and all they knew was Spanish. I’d ask my parents why [they didn’t speak Spanish], and it was really driven by my grandmother. She was born in Kansas, but her parents were born in Mexico. When she was a young girl, all the kids made fun of her because she didn’t speak English. She made a vow when she was in sixth grade that her children were going to learn English. Back then it was a stigma. Now, speaking multiple languages is a positive.

For me, there were never any issues with racism. I just heard stories from my dad. He grew up in the ’50s, and minorities could only go swimming on certain days in the summer, and then they would drain the municipal afterward. But I was fortunate not to experience anything like that.

Did that affect the way they raised you?
They instilled a lot of pride. They understood that one of the keys to overcoming discrimination is education. You make sure you set goals for yourself, and you persevere. Growing up in Kansas, I never thought I’d have the opportunity to work for Coca Cola or Nike or even a professional basketball team. I think it’s because I had a strong home structure, and not everybody is able to have that, unfortunately.

You played basketball in college. Where did your passion for the sport come from?
My dad. He was a huge athlete. I started playing competitively when I was five. I’d be practicing out in the driveway, whether it was winter or summer. But my mom was a hammer in terms of education. The beauty of sports is that there are a lot of life moments that can be taught—but you have to perform in the classroom in order to be able to perform on the court, and my goal was to play college basketball.

I still love the game and play as much as I can. And you have an inside look at the professionalism of these basketball players. They play one night, shower, get in the bus, get on a plane, and play the next night. And they do that 82 times. A lot of it is finding the right approach, setting a goal, and pushing yourself beyond what you thought you could do. It’s the mental aspect that makes them champions.

You’ve also worked for Coca-Cola and Nike—both high-powered companies. What was it like teaming up with Michael Jordan to brand the Air Jordan basketball shoe?
Working for Jordan was a great honor. There’s that intensity when he’s staring you down. I remember my first meeting with him, and walking away being hugely impressed with the way he would critique a design. He’s a very shrewd businessman, and he took a lot of pride in the products being developed, because it’s his name on them. There were 118 people working on that project, and it just showed you what he stands for in terms of excellence.

Imagine yourself back in high school, right around the time you were making your decision to play college basketball, and then your decision to pursue an MBA. What would you tell that kid?
I speak to a lot of college students, and my biggest thing is daring to live your dreams. They’re not going to be given to you. You have to put the work in. Even if you’re a person of faith, you can’t just pray and pray and pray for it—it’s on you. Set a goal for yourself. You want to be a photographer, basketball player, web developer—whatever it is—you set yourself up for success by plotting a course and choosing avenues as they show up.

For me, it was Nike. In 1994, I got a form letter saying they’d keep me in mind if a position opened, and of course never heard back from them. In 2001, I got a call. It took me seven years, and it was worth it. I believe that was the path my life was supposed to take. But again, I was putting in the work. You have the dream, and you have to prepare. Even though things may not work out the way you want and when you want, you have to persevere.