Propelled by skills he learned in the army, Adolph Galindo has spent the last 28 years making Delta Scale, Inc. a leading industry force 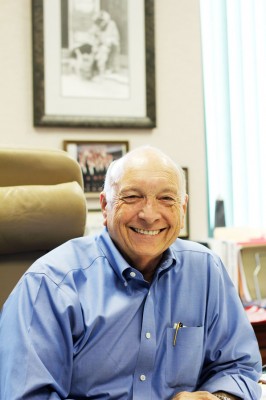 1940: As a youngster growing up on his granddad’s farm and ranch in San Antonio, Adolph Galindo was instilled with a worth ethic second to none. “We could play until we were 12 years old and then we had to take responsibility by doing chores, feeding animals, and working hard,” Galindo says. “Granddad would tell us, ‘You work for what you need and you pray for what you want.’ He told me if you remember that, you won’t have any trouble in life.”

1960: After high school, Galindo found himself with two choices—become a policeman or join the military. So, the next year, he joined the 2nd Armored Division and began learning about electronics. “I became a sergeant and even though I didn’t have to, I did what [my unit] did. I found out that if they see me working, they would respond positively to my supervision,” he says. “The discipline I learned at home just carried over to the army.”

1964:Following his time in the army, Galindo had a tough time finding work. He worked as a janitor at his old high school, did drafting work, and played drums in a band at night. He also entered the National Guard and used his Army training to work on radios and radar systems. In a short period of time, he became an instructor.

He was fortunate enough to land his job with Toledo Scale, starting with a two-year apprenticeship. He completed this in a year and a half and went on to work as a field service technician.

1966: On a personal front, Galindo married Judith Winters in December 13, 1966. He was also transferred by Toledo to Corpus Christi, Texas, as a service manager.

1967: Uncle Sam called Galindo back to service. He was sent to school to upgrade his skills and later stationed at Corpus Christi Naval Air Station in the avionics section. Here he installed radios and radar systems in the Huey Gun Ships. He oversaw a section comprised of 12 men, charged with completely rewiring each Huey Gun ship. These helicopters were brought in from Vietnam to be refurbished and put back into service.

1969: Galindo was released from Army duties and returned to Toledo Scale in 1969. Later that year, he was offered a job at Toledo Scale factory in Toledo, Ohio, as an instructor on scale systems.

1970: He was promoted to district service manager in San Antonio where he operated a very successful service department for the next five years. In the following years, he received several promotions and was transferred to Reliance Electric, the corporate owners of Toledo Scale. He became the division manager of the southeast United States.

1982: During a conversation with his wife, Judy, in May of that year, Galindo brought up the prospect of starting his own business, an idea that she had heard over and over again through the years. She offered him this advice: “Either do it or stop talking about it!” Galindo decided right there and then that he was finally going to follow his dream.

He was working at the time for Reliance Electric, and had hoped to open up his own Toledo Scale distributorship. “I asked Toledo if I could get an authorized distributorship and they said, ‘Absolutely not.’ I wrote my letter of resignation and gave them six months.”

1982 to 1983: The company didn’t want to see Galindo go and offered him other opportunities within the company. However, he kept turning them down, asking them to reconsider his idea, but the answer was always “no.” “By October of that year, I had established my company Delta Scale, Inc. I received a call from my boss telling me that I may be getting the distributorship,” Galindo says. “They finally agreed and I bought their little office of five people and had to take on everything—the parts, trucks, the people and the debt—and in 1983 we opened the doors and started doing business.”

2009: Over the course of the last 29 years, Delta Scale, Inc. has evolved into a leading scale distributor of Mettler-Toledo Scales and a food-service dealer. It supplies all scales, grinders, mixers, and saws to grocery industry, hospitals, restaurants, and the restaurant- supply business. The company is the exclusive distributor of Mettler-Toledo products in the region of North Carolina, South Carolina, Virginia, and West Virginia.

Galindo has since brought his son, Clayton Galindo, into the business as corporate vice president with plans to have him take over if and when he decides to stop. “I may never retire, but there needs to be new blood with new ideas so the company can keep improving and support the future growth,” Galindo says.

TODAY: With accounts in the retail-grocery business, including Harris Teeter, Food Lion, and Kroger, Delta Scale has continued to leave its mark on the industry. Our commercial division includes Mettler Toledo heavy-duty scales, such as truck scales, floor scales, bench, and portable scales. “I am 70 years old and I love coming to work every day; I still enjoy it,” Galindo says. “My job today entails more of operations manager. I still stay involved every day, but my son is the VP and I have other managers. But I still want to know the pulse of the business. I see every invoice, sign every check, and am trying to train my son to look at things the way I do.”