Photo by Poring Studio on Adobe Stock
By Aracely Muñoz

Latino contributions to the United States are undeniable. It doesn’t matter whether you look at overall population (in the 2020 census, more than sixty-two million people identified as Hispanic or Latino), labor force participation (Latinos are expected to account for nearly 80 percent of net new workers between 2020 and 2030), or GDP (in 2020, the US Latino GDP was calculated at nearly $3 trillion, making the US Latino population equivalent to the fifth-largest economy in the world).

But while the Latino community’s population and economic impact continue to make headlines, one important area of influence is frequently ignored: the ongoing philanthropic contributions of Latinos in the United States.

The lack of coverage on Latino philanthropy has likely been compounded by the misconception (which I hear all the time in my social circles) that Latinos are “not philanthropic.” That—as the Lilly Family School of Philanthropy at Indiana University has noted—Latinos are typically “on the receiving end of philanthropy rather than the giving end.”

Unfortunately, both crowdfunding and supporting one’s family members are considered nontraditional forms of philanthropy. Neither qualifies as a charitable contribution that can be tracked based on current IRS guidelines unless the person/entity providing the donation has a registered tax-exempt organization. As a result, it’s easy to interpret charitable data in a light that underestimates Latinos’ true philanthropic contributions to the United States.

And those contributions are profound. A different study produced by Bank of America studied the giving vehicles used by affluent households of various ethnic backgrounds. That study found that affluent Latinos are nearly 4.5 times more likely to have a private foundation than affluent white or Caucasian individuals.

That same study revealed that affluent Latinos are approximately six times more likely than their white counterparts to have participated in a giving circle or to have helped establish one. A giving circle is a group of individuals who share the same values and who pool their money and work to collectively direct their charitable donations. One of the most well-known giving circles in the US is the Latino Giving Circle Network, which is part of the Latino Community Foundation.

While the Latino Community Foundation was founded in 1989 in California, the Latino Giving Circle Network began in the last decade. During that time, they have established nineteen smaller giving circles across the state: all of these circles support Latino-led and Latino-serving organizations and have collectively distributed more than $2.4 million. Another giving circle, the H100 Latina Giving Circle (operated through the Texas Women’s Foundation), was established less than five years ago but has already distributed nearly $400,000 to nearly fifty organizations.

But giving circles are important for more than just the dollars they donate and the causes they support. As Latina Sara Lomelin, leader of international organization Philanthropy Together, explained in her recent TED Talk, giving circles can disrupt—and help equalize—the philanthropy sector. Philanthropic contributions of five, six or seven figures are very impactful to organizations, but this level of giving may be out of reach for the typical US Latino, whose average annual household income is between $45,000 and $53,000. Giving through a giving circle shows the power of collective giving, along with its impact.

Of course, giving circles are far from the only way that Latinos are making an impact on the philanthropy world. Nonprofit organizations like Hispanics in Philanthropy (HIP), which was established nearly forty years ago, have not only raised tens of millions of dollars in support of the Latino community but have also helped raise awareness of critical issues affecting that community. Other nonprofits, such as the Friends of the National Museum of the American Latino, do not distribute funds to the public but rather use their influence to advance the community’s interests and elevate future generations of the community.

Last, but certainly not least, are the incredible individual philanthropists who have made an indelible mark on both the Latino community and the nation as a whole. The Hispanic Scholarship Fund, for example, was started by a man named Ernest Robles. Ernest mortgaged his home for $30,000 in order to establish the organization and help Latino students attain degrees: since its founding, the organization has granted more than $700 million in scholarships to more than sixty-five thousand students. Robles, unbeknownst to him, began a movement nearly fifty years ago that would help educate and change the lives of future generations of Latinos in the United States.

As a community, we need to do more to celebrate the accomplishments of individual philanthropists like Ernest, of organizations like HIP, and of giving circles like the Latino Giving Circle Network. We need to share their stories and invite others to do so as well. Perhaps then we can begin to change the narrative about Latinos’ philanthropic contributions to the US and show the media industry that those contributions—like all other contributions by the Latino community—are worthy of being highlighted, recognized, and celebrated.

As the director for corporate partnerships at Children’s Health, Aracely Muñoz leads a team focused on collaborating and engaging with companies that choose to partner with Children’s Health as their cause of choice in the greater Dallas and Collin County community. Her team raises several million dollars annually to help provide critical care and resources to patients and families treated at the hospital.

Muñoz is the chair of the XIX Society at the Texas Women’s Foundation, a member of DFW H100, a part of the H100 Latina Giving Circle, and a board member for Educational Opportunities, an organization dedicated to providing scholarships and mentorship opportunities underserved youth that graduate from Dallas Independent School District high schools. In 2018, Muñoz won the La Cima Latina Leader award from the Greater Dallas Hispanic Chamber of Commerce in the nonprofit category. More recently, she was included in the Association of Healthcare Philanthropy’s 2021 class of 40 Under 40 leaders and in the Dallas Business Journal’s 2022 class.

Muñoz has an MBA from the University of Massachusetts Amherst, a master’s degree in global leadership from Dallas Baptist University, and a BA in Latin American studies from Brown University. 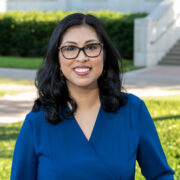 How Rosa Estrella Learned the Importance of her Latin Roots