The men in uniform are only a small portion of the team that puts on America’s pastime. HE asks Cesar Sanchez how he got into Hispanic baseball representation, what the view from the inside is like, and what it takes to be a successful agent.

How did you break into sports agency work? Did you have a baseball background?
Just like a lot of other little kids, baseball was something I dreamed of every single day. I played it through high school, and that’s where my playing career ended. When I got to college, I knew there were career opportunities within sports and made that my main focus. I landed an internship my senior year with Fox Sports Latin America, but when that was over, I learned the harsh reality that there aren’t many job openings in the sports world. I went back to school for my MBA and tapped into some of my old networks to get my first job in professional sports managing sponsorships for the Los Angeles Angels of Anaheim. 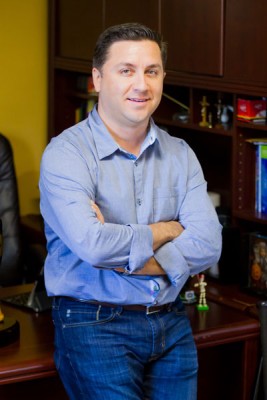 What has been your most memorable negotiation, and why does it stand out?
The first deal I made with SFX Baseball (now Relativity Baseball, a division of Relativity Sports and Relativity Media). It teamed up Pedro Martinez and Gillette. It was a big partnership with a future Hall of Famer, and, because it was my first with SFX, I was excited and anxious. My biggest fear was that Pedro would change his mind. You always get those butterflies because you’re dealing with human capital. At some point, it’s out of your control, and you can only cross your fingers. But in this case it made sense for both sides, and I was able to marry their interests.

Were you ever starstruck early in your career, or even now, working with professional athletes?
Not with an athlete. Part of that is in my business training. It was hammered into us at school that you have to respect that line between performer and client. Even though I grew up a fan of the game, I never had a favorite player. I was a bigger fan of the essence of the game and competition.

What makes a successful agent?
Being prepared, being informed, and being persistent. At its core, this is a sales job. You’re out trying to find deals. You’re going to fail a lot more than you succeed. You have to understand your client, talk to as many people as you can in the industry, and study what companies are doing with their marketing and advertising. Ultimately, a good agent knows how to create value and sell that.

Because you work with specifically Hispanic major leaguers, have you found that clientele poses any specific challenges in the American sponsorship market?
I deal with clients from the Dominican Republic to Cuba to Venezuela, and I always say one of the few things they have in common is that they play baseball. Otherwise, they have their own personalities, priorities, and personal lives. Language and assimilating to American culture will always be challenges, but there are bigger obstacles I face that have nothing to do with their heritage.

What are some of those?
Time management is one. These guys are playing baseball every single day. You don’t want them to lose focus of their real jobs—they’ll make a lot more money as athletes than they will as endorsers—so managing their time off the field is key. Another aspect is that there are only a finite number of companies who want to use athletes as endorsers. Combating that is a combination of fishing where the fish are, so to speak, but also being creative to figure out which companies can benefit from these players’ personalities.

What would you say is your trademark as an agent?
I like keeping the players informed throughout the whole process unless they tell me otherwise. Some guys just want to know where to be and what to do. I like knowing the player knows what he’s getting himself into. I involve them in a lot of the process. If I know I have a legitimate offer, I’ll bring it to them and get their thoughts. Before I close the deal, I make sure they’re 100 percent on the same page as the sponsor.

Who have been your mentors in this profession? Is it the kind of career that you work your way up to, learning the ropes as you go?
The biggest influence in my career as a marketing agent has been Fern Cuza. He’s a pioneer who I’ve been able to tap into. He has guided me along the way, dealing with sports personalities and the challenges that come with that. If there were a blueprint to this career, there would be a lot of successful agents rather than the few who are notorious. I’ve learned you have to be able to manipulate your strategy every once in a while to find success. You have to be flexible and adapt to those tactics that yield results.

What is the most rewarding aspect of your job?
It’s baseball. It’s something that I love and feel blessed to do. I’m fortunate that I’m able to do a job that I love and that allows me to rub elbows with some of the people I grew up admiring as a kid.

Xavier A. Gutierrez Is Leading the Pack

Ralph Esquibel Was Destined for the Dodgers

Julie Melendez-Reicis Is Fit to Lead

Lucino Sotelo Stays in the Green and on the Green