Oportun’s Alejandra Velázquez believes access to capital is one of the last great inhibitors to financial inclusion, and she’s working to change it 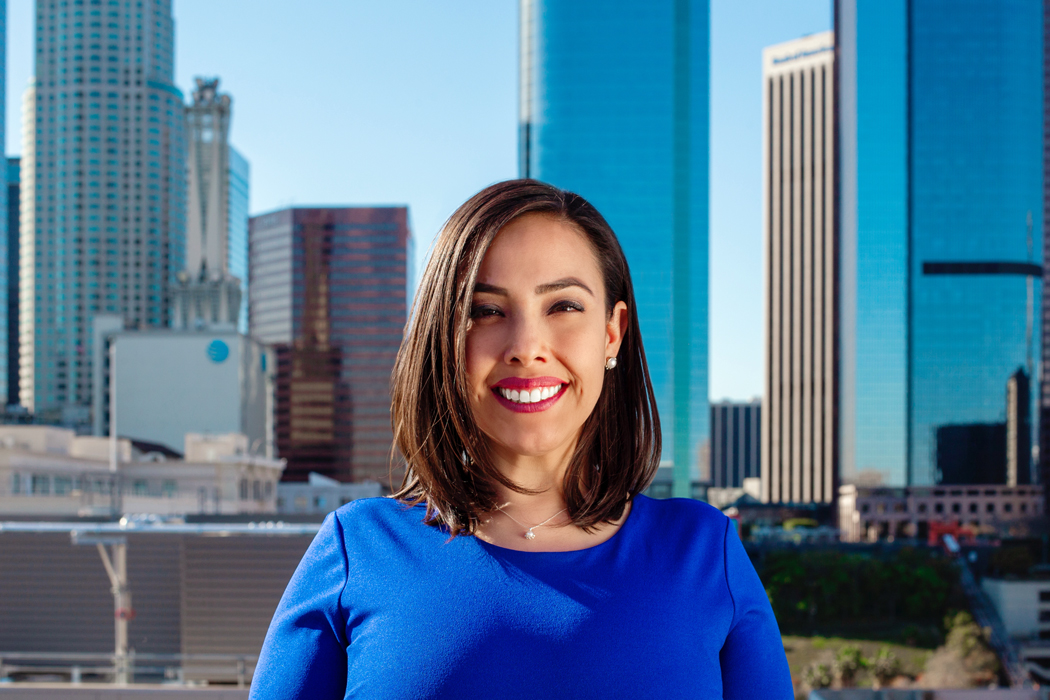 In many ways, Alejandra Velázquez’s journey to Oportun Inc. mirrors the often difficult paths tread by the people she serves. Oportun was created with the goal of serving the one hundred million Americans with little or no credit history that have been excluded from the financial mainstream.

Since opening in 2005, Oportun has helped more than 890,000 customers establish a credit score, disbursing more than $9.8 billion in loans to hardworking people for everything from medical bills to home improvements and car repairs. Oportun is an affordable alternative to the predatory payday loan companies that seem to appear on every street corner in disadvantaged communities. Velázquez, Oportun’s senior director of public affairs, is from one of those communities.

The eldest of five children born to immigrant parents from Mexico, Velázquez grew up in a low-income home in east Los Angeles. “I experienced the full array of challenges that most poor families do,” she reflects, “including watching my parents toil away in low-wage jobs, knowing that they were living paycheck to paycheck.”

As is the case for many immigrant families, Velázquez’s parents always emphasized the importance of education. They encouraged her to find a way to work smarter, not harder. To Velázquez, that meant getting into the best college possible. She had big dreams for herself, and in the seventh grade, she announced to her teacher and class that she would be attending Yale. Her teacher’s response: “Young lady, sit down.”

“This man was a great teacher, and in retrospect, I realize it must have been really hard for him, at that moment, to respond to a smart but poor kid from east LA,” Velázquez explains. “He didn’t want to discourage me, but he also probably didn’t want to give me false hope knowing very well the odds were stacked against me.”

“I realized that . . . I would have a voice in shaping policy around consumer protections and genuinely helping make people’s lives better.”

But Velázquez achieved her dream. She explains that her experiences at Yale were just as instructive as her upbringing when it comes to her present role. “I always knew I had been poor, but I had never been in the presence of so much wealth to actually compare my experience,” Velázquez says. “You don’t know what you don’t know. All of these disparities became more and more apparent, and that helped shape my public consciousness.”

In fact, after graduating, Velázquez went to work in public service; she cut her teeth working on behalf of former California State Assembly Speaker Fabian Núñez. “That’s where I really learned to listen to the needs of the community,” she says. “I was a representative for someone who was making impactful policy decisions, and it was imperative for me to interact with constituents, community advocates, grassroots organizations, business leaders, and local policy makers.”

Soon, Velázquez’s résumé reflected her extensive work in policy, legislation, and coalition-building. She was the first education policy manager for the Los Angeles Area Chamber of Commerce, and after graduating from the UCLA School of Law, she went on to lead external and government affairs at other organizations. Coming in-house to work for a corporation, she admits, was never something she envisioned for herself. But as she learned more about Oportun, she recognized that the organization was a place where her personal values aligned with the company’s goal to help improve the lives of hardworking people.

“I realized that in my role at Oportun, I would be serving as a liaison and representative to elected officials, policy makers, and community partners who are all working for similar objectives,” Velázquez says. “I had a unique opportunity to bring my diverse personal and professional experiences to the private sector to genuinely help people achieve their American Dream.”

Most important, Velázquez says, was the trust she knew she could place in Oportun. Before deciding to come on board, she asked herself, “Would I be okay with my mom taking out a loan with this company?”

“I think that’s an important question anyone in this space should ask,” she says, “and that has been my North Star since I joined.”

Since 2016, Velázquez has helped Oportun expand its footprint into new states, open new retail locations in traditionally underserved markets, pass consumer friendly legislation, and become a publicly traded company. She is also part of the team supporting an application for a national bank charter which would allow Oportun to service customers across the country.

Alejandra Velázquez discusses the impact and potential of Oportun’s application for a bank charter:

She also amplifies Oportun’s community outreach via grants for nonprofit organizations working at the neighborhood level. One of those organizations, DIY Girls, engages young women of color in technology, coding, and college and STEM career readiness.

Velázquez also manages Oportun’s partnership with AltaMed, a Los Angeles-based healthcare provider, to help address the connection between financial distress and health. “The communities that we serve are also more likely to be under- or uninsured,” she says. “Being able to partner with an organization that provides services to people without these options is important for us.” The organization also works to provide opportunities for voter registration, civic engagement, and preparation for those hoping to become US citizens.

As Oportun continues to grow—as an organization as well as a community partner—Velázquez is able to execute strategies that deliver capital to families that remind her of her own. The senior director also sits on several nonprofit boards outside of work, furthering her personal reach into communities in need, and strives to provide mentorship to potential college and law school students who share similar backgrounds and stories. Velázquez may have had to blaze her own path, but she’s reaching back now to pull along the next generation of great leaders.

For Marcos Marrero, Technology Is More Than a Job