Growing up, Wyndham Vacation Ownership's Maria Camacho never heard her mother utter the phrase “I can’t.” It’s no wonder Camacho leads her IT team with the same relentless drive her mother exemplified.

For two and a half years, Maria Camacho has been the one-woman navigator, motivator, and protector of the creative sphere for 100-plus employees working on the Voyager Project, which she oversees. It is Wyndham Vacation Ownership’s (WVO) technological endeavor on track to get their valued owners on vacation more often, faster, and with greater ease through enhancements to inventory and reservation systems. It may sound like a tall order, but Camacho has years of experience that have readied her for such a feat.

When she touched down in the city of Manila in the Philippines in 2000, Camacho was a Puerto Rican American from Massachusetts by way of New York, and she faced a daunting task: She was working in telecommunication delivering a fraud-detection application for a Philippine telephone company, and not only did she have to adapt to a new culture, but she had to get acquainted with a new customer, company, and team.

The last of those was at first her biggest challenge and later her greatest accomplishment, but it could not have made that transformation without Camacho’s leadership, a valuable quality the mentors throughout her life instilled and encouraged. As a child, her Spanish-speaking mother built a life for herself and two daughters while teaching them the power of determination. Despite the many hurdles she faced as a single mother and immigrant, Camacho remembers her mother never used these obstacles as excuses. 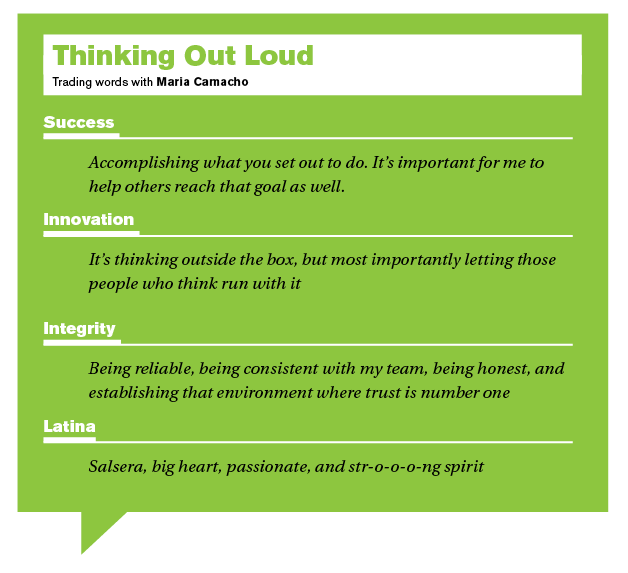 Taking inspiration from her mother’s success and independence, Camacho joined ROTC as soon as she started high school and built the drill team from scratch. She watched films, organized her classmates, and directed them to several championships as the captain of the senior class. Her teacher, Henry Palmer, saw in her the potential to lead and refused to let her give up, helping Camacho prove to herself that she could accomplish her goals.

After four years of ROTC, Camacho says her next step, joining the military, felt like home. So she relocated to Tampa, Florida, and polished the skills that would help her mold her team in the Philippines. She split her time as a US Army intelligence analyst between teaching and developing for the Department of Defense, but always practicing communication and problem solving. When looking over a student’s shoulder, she would wait for “aha” moments. “There’s nothing more satisfying than seeing the lights come on,” Camacho says, “seeing someone have that breakthrough and, most importantly, having touched their lives and helped them mold their long-term aspirations into a career.” Bringing ideas to life was rewarding, but the solitude of developing behind a computer left Camacho craving the interaction of project management. So with the perfect combination of enterprise and expertise, she faced her next challenge.

Camacho firmly believes in the necessity of a tranquil workplace, which she prides herself on at WVO, but at the start of her two-year engagement in the Philippines, something as small as a syllable could put a snag in communications. “A developer came into my office and said, ‘I don’t feel come-fort-able with this approach,’” Camacho recalls. It took her a few tries to understand his concern. In other instances, the strong personality she had been raised to project needed to take a more subtle approach to her authority. “I had to look for the ‘softer side of Maria,’ as one colleague put it,” she says with a laugh. “I had to gain their trust to work through the cultural expectations.” Once she earned their trust, however, Camacho says she could undoubtedly count on her team to work a 26-hour day if she asked them, no hesitations.

That’s the culture she’s cultivating at Wyndham and executing with an arsenal of personnel-management strategies. Camacho keeps the ship heading in the right direction and occasionally offers suggestions, but she says the key to a productive team is creating a space that is distraction-free and encouraging. And with workweeks pushing past 40 hours, key deterrents to mutiny among her troops have been employee appreciation and team-building exercises. With the launch of the program within reach, Camacho explains the heart of the team’s success: “They collaborate and challenge each other,” she says. “I have rarely heard the words ‘I can’t’ or ‘no.’ A team that works together on a daily basis for two years and has that mentality is very strong and will make a corporation very successful.”

Latinos@Baxter was born out of a need.