For U.S. Bank’s Dennis Garcia, Albuquerque is a land of opportunity, and he is helping cultivate its next generation of professionals

If Dennis L. Garcia had only five minutes to impart his best advice, it would be this: Doors will always open for you. You can choose to walk through them or not. And just because you walk through, it doesn’t mean you can’t come back out. Five minutes is all he gets each time he meets with students at the University of New Mexico’s Hispanic Youth Institute. He first meets the teenagers as a group and then individually during five-minute sessions—teens whose futures he can help shape because he shares a similar background. 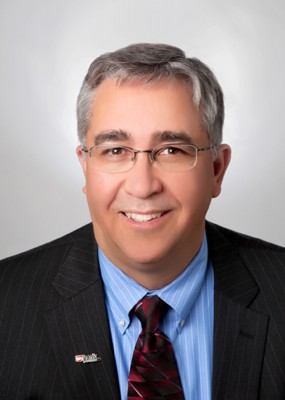 A native of Santa Fe, New Mexico, Garcia is now geographically back where he started, taking on the roll of senior vice president at U.S. Bank in Albuquerque. But between his days as a high-achieving high school student and his current managerial position at a major financial institution, he took a risk.

His first job at First National Bank in Albuquerque connected him with some contemporaries in the banking industry in New York. After successfully collaborating on a project, they left an offer on the table: if Garcia ever wanted a change of scenery—and pace—he could give them a call. “It wasn’t ever a design on my part to move to New York City,” Garcia says. “But, I had a skill set that fit, and I wasn’t afraid to take the chance.”

So he left Duke City for the Big Apple. Though the work was engaging in New York, after 10 years and back-to-back nor’easters, Garcia missed the southwest sunsets. “You can travel the world, but there’s nothing like the place where you grew up,” he says. But more than just homesickness, it was the realization that there was work to do back home, beyond the office, that provided the final push. “I really had a desire to make a difference in New Mexico,” Garcia says. “We commonly hear the phrase ‘brain drain’ here—young people forced out of the state because of a lack of opportunity. I came back with motivation to change that.”

Garcia is empowering Albuquerque’s young talent through his work at the Hispanic Youth Institute (HYI). In the lecture halls at the University of New Mexico where Garcia teaches financial markets and institutions, he has hours to impact his students. At HYI, however, it’s more like speed dating. With only five minutes to spend with each student, Garcia needs to hook them, engage them, and leave them with a different idea about their own potential. He begins by telling them his backstory, then stops just before his move to New York. He asks the teens what he should do. Some say they’d never go. Some would be scared. Others ask how to get there.

Being Hispanic never translated to an opportunity, or lack thereof, in Garcia’s mind, but not everyone from his community shares that perspective. “Too often, the Hispanic culture isn’t as open to the entrepreneurial spirit as we should be because we are afraid to let people make a few mistakes,” he says. “I try to tell those kids that all their ambitions are available to them if they’re willing to take a few risks.”

At U.S. Bank, Garcia feels fortunate to have come back to an organization that shares his passion for helping the community of Albuquerque realize its full potential. “I don’t think it’s inherent to a lot of institutions to impress that community involvement is important,” he says. “U.S. Bank is the first place I worked that gives up to 16 hours of paid time off annually to volunteer. That’s unique and fits well with my personality.” The bank also focuses on helping small businesses—a key to Albuquerque’s vitality. Garcia has been able to offer financial consultations through the High Desert Discovery District, which fosters scientific and entrepreneurial development among young businesses in New Mexico. On the Albuquerque Hispano Chamber of Commerce board of directors, of which Garcia is a member, he says learning from the successes and insights of the city’s prosperous businesses is paramount to changing perceptions.

Garcia has lived what many have yet to learn about his city: that it is a land of opportunity ripe with talent and potential. He came back to share that message, and while there are still many to inspire, he’ll continue to spread the word. “When Silicon Valley got started, perhaps this is what it looked like,” he muses about Albuquerque. “There’s this energy here that is powerful. We, the business community, have not done a good enough job of publicizing that, but the doors are open. All that’s left is for us to take the step forward.”