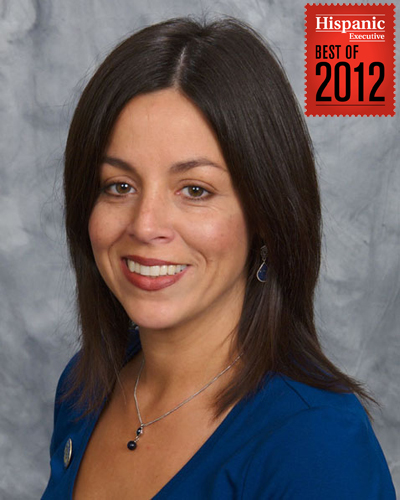 As farmworkers and factory workers, Cindy Estrada’s parents and grandparents worked harder than most people had to. They did their best to provide Estrada with opportunities they didn’t have when they were growing up, but their hard work came with the understanding that she would use her education to give back to her community. That’s exactly what she did. From an early age, Estrada had a knack for community organizing and an interest in social justice. After college, it only seemed natural when she began working on a campaign to help tomato pickers alongside Dolores Huerta, the legendary labor leader and civil rights activist.

In 1995, Estrada began working for the International Union, United Automobile, Aerospace and Agricultural Implement Workers of America (UAW), one of the largest and most diverse unions in the nation. Fifteen years later, after many successful campaigns, she became vice president in 2010, making her the first-ever Latino/a elected to serve as a UAW vice president.

“I realized early on that being elected UAW’s first Latina vice president was a huge achievement—and a huge responsibility,” Estrada says. “There are few Latinos at leadership levels, and I was humbled and honored to receive the position, but it was only possible because of the work of the Latinos that came before me. I think it’s important for those of us who are older to aim high, to run for those high-ranking positions, because it shows young Latinos that it’s possible to succeed and prosper while giving back to their communities.”

Estrada is the type of person who thinks about the big picture. The aim of her work is not just to improve the local communities in Detroit, where she’s based, but to make the world a better place. A major goal is combating the political rhetoric that implies that immigration is adversely affecting the United States. Politicians adamantly contend that the influx of Latinos poses a threat to American workers, but according to Estrada, that logic does nothing but pit worker against worker and fails to recognize the huge economic contributions that Latinos make to this country. 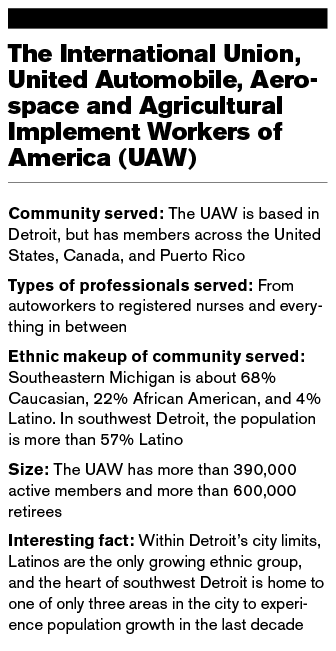 “This is an economic issue,” she says. “We’re trying to figure out how to raise the standard of living for all workers. Companies are paying their workers such low wages that people end up having to take public assistance just to make ends meet. We need to get to a place where it becomes unacceptable for company executives to be making $20 million a year while they pay their workers $10 an hour.

“There’s nothing wrong with being rich, but it becomes a real issue when you’re affecting the livelihood of thousands of families. One of my goals moving forward is to make it clear that if you’re doing business in the United States, you have to pay a livable wage. These bad business practices need to be exposed, and the UAW is working toward making that happen.”

Studies have shown that the wages and benefits for Latinos are always higher when they’re unionized. It’s reasons like these that have always driven Estrada, who believes there’s nothing more powerful or empowering than teaching people how to find their voice and to advocate for themselves. Growing up, Estrada learned that when you organize, you learn how to be the most effective and to create the most change. As the country’s demographics shift, she says we need to figure out how to make our voices heard at every level, from local school boards to the federal government.

“With organizing, you’re often working with people who are vulnerable, people who are undocumented, people who are being exploited—and your first instinct is to protect them and maybe even coddle them,” Estrada says. “But you have to understand that these are strong people. These are people who have risked their lives to come to this country and provide a better life for their families. As an organizer, it’s not your job to organize them. It’s your job to teach them how to get organized and advocate for themselves.”