For 12 years, Daniel Sandoval worked on creating alternative and waste-fuel technologies for other companies. Then in 2003, after a jarring layoff, he started his own business developing renewable and sustainable energy services and solutions sourced largely from biomass. Six years later, Source Technologies, LLC is ranked on the Inc. 500 list of fastest-growing privately held companies in the United States.

as told to Cristina Adams 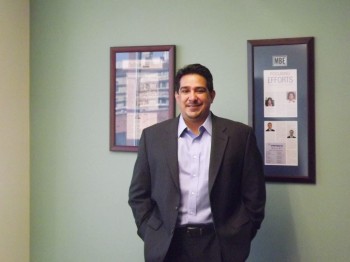 “I hit the ground running right after I graduated from the University of New Mexico with a degree in electrical engineering. I went to work for a public utility in Albuquerque. I had worked there for two years while I was going to college, and they paid for my last two years of school. I wasn’t committed to that kind of career, but they had invested a lot in me and offered me a good job during an economic recession. I ended up working for them for about seven years as a principal planner for the whole state of New Mexico.

Then I moved up to Ann Arbor, Michigan, and began working for a small start-up that was developing an engine generator designed to operate on waste heat and biofuels. I was developing all the electrical components. One day I went to work and the door was locked. There was a sign on the door that said to call a certain number for Michigan unemployment. The company was out of business, and the investors had closed the door on us.

After I went on a couple of interviews, I told my wife that I really didn’t want to work for anyone else. So, I started working for myself out of my house. I got in touch with some people back home in New Mexico and landed some project work. For a while, I would fly down there to work and then fly home in between jobs and on weekends. Eventually, my wife and I decided it wasn’t cost-effective for most of my projects to be in New Mexico and my home to be in Michigan. So, in early January 2004, we packed up the car, the dog, our two small children, and a U-Haul and moved down to Albuquerque.

We bill ourselves as an energy-services company; renewables is just one aspect of it. We also do energy development, but not solar or wind. Why? Because none of those projects are viable without government subsidies. That kind of renewable energy can’t stand on its own yet and we don’t do anything that doesn’t stand on its own. We produce projects that are economically sustainable regardless of government incentives.

Looking ahead with Daniel Sandoval

With a growth-rate percentage already in the thousands, the strategically minded president of Source Technologies, Daniel Sandoval, says the company’s continued success depends on its ability to offer unique energy services that set it apart from the competition. In the near future, he plans to:

• Improve the company’s efficiencies and processes

• Develop niche energy services to both help customers save money and increase the company’s net margins. Source Technologies also plans to double its real profit every year for the next five years.

Our growth rate from the end of the first year until now has been close to 2,000 percent. We now have about 22 employees, and we’ve been on the Inc. 500 list of fastest-growing privately held companies in 2009 and 2010. The first time we made the list, I went to the awards ceremony in New York. It was a huge deal for us. And what was really great was being around so many other entrepreneurs. I went there already fired up and got even more excited being around all those people who want to do and create.

It’s what I tell people at the Albuquerque Hispano Chamber of Commerce when I lead training sessions: Don’t look for a job, look for an opportunity. There aren’t many entrepreneurs in the world because it takes courage to start something. You shouldn’t be bound by what job offers you find in the newspaper. If you approach the world as an entrepreneur and not an employee, you’ll have many more opportunities in life.”