Rodrigo Montemayor lives by a motto he learned from his father: ser competitivo significa hacer algo mejor y diferente que el de enfrente—being competitive means doing something different and better than those in front of you. That algo, today, is a sprawling range of services Montemayor offers as general counsel and institutional relations director for Latin America at the Fortune 500 building-materials giant Owens Corning.

Montemayor is responsible for all legal and compliance affairs related to Latin America within the company. Also in charge of institutional relations, he has been involved as counsel for all acquisitions and divestitures the company has made in the region, working directly with the US-based legal team in many cases.

Additionally, he serves as a board member of several Owens Corning joint ventures in Latin America and the Middle East. 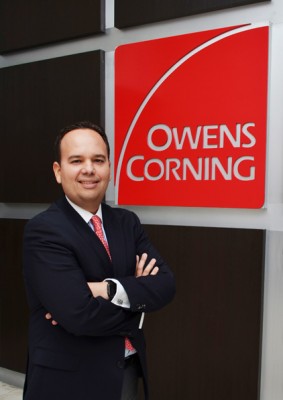 Montemayor was born and raised in Monterrey in the state of Nuevo Leon, Mexico—a city with “a very international, business-oriented culture,” he says, and where he lives today.

“My experience with clients in Latin America began when I participated in the International Lawyers Program at Cleary Gottlieb in New York,” Montemayor recalls. “I assisted partners and senior associates on transactions that required understanding aspects of multiple legal systems of different countries that were culturally close to mine, which I found fascinating.”

Later, he took a role as Latin America counsel for Johnson Controls’ battery business. “In this role, I was able to develop my understanding of the key legal aspects relevant to doing business in the economically dominant countries in the region; Brazil, Argentina, Chile, and Colombia,” he says. “Now, Owens Corning has given me the opportunity to continue that practice and expand it to include institutional relations, which is a key part of our business strategy and growth.”

Montemayor has led countless corporate restructuring projects and complex litigation cases throughout his career, particularly in Latin American countries. His knowledge and experience doing business in the region have given him an in-house reputation as “the company’s cultural translator.”

Montemayor admits that while the Latin American region offers great advantages to foreign investment, it also brings challenges with respect to law enforcement, efficiency of the justice system, and, in some instances, corruption. That environment makes the issue of compliance especially critical for effective corporate management.

“Compliance in Latin America should not be seen just as a desire or an aspiration, but as a key element in the culture, business practices, and performance of international public companies,” he says. “A compliance program will allow a company to operate in accordance with local and international legal requirements and reduce risk of fines or penalties from governments. It will also protect the organization from reputational harm, and, more importantly, allow employees to work in a healthy environment where they know things are done right and can become an example for other companies.”

He believes in the business case for having a strong compliance plan in every organization—particularly in Latin America.

“In that sense, Owens Corning has a solid plan and very strong and clear ‘tone at the top,’ which is the first ingredient in a world class ethics-and-compliance program.”

As an attorney leading the legal function of a Fortune 500 company, Montemayor’s experience has led him to pinpoint major differences in corporate practices around the world.

“The most significant differences between the US and Latin American countries are their legal systems, their macroeconomic conditions, and the local customs, which can be a very defining aspect in the way business is conducted,” he says.

He considers Owens Corning a homogeneous company in terms of culture regarding leadership, operations, quality, efficiency, and performance across the globe. “That being said, every country is different no matter where you work, and I think people at Owens Corning understand that very well,” Montemayor says.

“The Latin American region has a common language root and is often seen as a whole, but has more than 20 very different countries, each with its own culture, history, political problems, laws, and regulations, which we try to understand and be sensitive to when conducting business.”

Owens Corning has been in the Fortune 500 for 61 consecutive years—since the list was created. Montemayor attributes its consistency  to maintaining a strong financial performance, leading products in the market, and expanding its global reach.

“Owens Corning’s achievements are at least partially attributable to its commitment to doing business ethically,” he adds. “Also, our success is driven by our ability to attract and retain the most talented and high-performing employees available globally. We provide an environment where the most outstanding talent in the world feels welcomed, respected, and valued for their contributions.”

“Such an environment facilitates strong business results and competitive advantage by leveraging the power of diverse experiences and perspectives.”