Julio Garcia started his human-resources career at Pacific Park, an amusement park on the Santa Monica Pier in California. Despite his unconventional break into the field, his rise to success in HR hasn’t been a roller-coaster ride—it has been much more exciting than that.

“I was responsible for hiring people for my department,” Garcia recalls of his first job. “I’ve always had a keen sense for selecting good talent. … After seeing the quality of my hiring, I was approached by HR to oversee staffing for the entire amusement park. It was a fun job.”

From there, an HR professional was born. Garcia’s skills have taken him to HR positions in the entertainment and hospitality industries. Today, he is the director of human resources for nuvoTV, a television network whose name fuses “NUevo” and “VOice,” featuring programming for today’s bicultural Latino, such as Mario Lopez: One on One, Curvy Girls, Fight Factory, LA Ink, Miami Ink, Prison Break, and more.

Having worked at Pacific Park for several years, Garcia’s big break came when he attended a career fair hosted by The Imagen Foundation, an organization dedicated to recognizing positive portrayals of Latinos in media and furthering employment opportunities for Latinos in TV and film. “All of the major studios were there,” he says. “That’s how I landed my job at MTV Networks.”

Garcia was hired at MTV Networks (MTVN) as executive assistant to the senior vice president of HR. “I was exposed to a new environment,” he says. “It was a different world. I eventually made the move into staffing and became a recruiter for MTV Networks.” 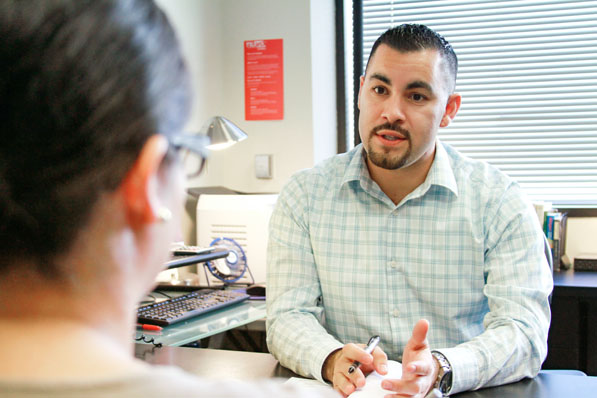 Garcia says MTVN geared him with great experience, but he eventually took a job at Hilton Corporation to broaden his skill set as an HR generalist.

“At MTVN, I worked as a specialist,” he says. “I wanted to broaden my reach and pursue a managerial role. At Hilton, I was offered that opportunity. I developed as a people manager, interacting at all levels of the organization, and was able to perform in other HR capacities, such as training and development, benefits administration, and employee relationships. I challenged myself and learned a great deal in the process.”

While Garcia loved working at Hilton, he ultimately missed the entertainment industry. “At MTVN, I thrived working in a creative environment,” he explains. “I wanted to get back into the industry. When the opportunity came up at nuvoTV, I jumped at it. I’ve been with the company for four years and oversee all aspects of HR. I really enjoy working here.”

Garcia identifies the greatest benefit of the HR role as having the ability to lead and influence others. “There is never a dull moment in HR,” he says. “I believe in creating a positive environment where people can thrive and perform at their best.” He also notes that there’s a psychology behind a strong HR department. “If you do your job well, people will respect you. As an HR professional, I’ve come to realize that my approach can be very impactful,” he says. “I listen and offer solutions to problems, and ultimately help people move the business forward.”

While each job is different, Garcia looks for pride and passion in every person he hires. “I don’t want anyone who is here to just collect a check,” he says. “You have to have a drive to succeed and a desire to be a part of a bigger cause. When I interview people, this always comes through in the conversation. Together, both sides win.”

Fueled by the desire to help others break into the industry, Garcia makes times to collaborate with The Imagen Foundation. “I owe gratitude to this organization,” says Garcia, who now holds workshops at Imagen’s career fair for those interested in pursing a career in the entertainment business. “They gave me an opportunity and exposed me to the industry. Now I attend the same career fair, but I’m on the other side of table. I’m happy to give back and offer the same inspiration.”

Garcia’s other goal is to expose the next generation to the opportunities that may seem out of reach. He helps students prepare for the real world by holding workshops on résumé writing and effective interviewing. He hopes to prepare them for the kind of success he’s discovered.

“I’ve found my role as an HR professional,” he says. “Working in this field requires a high level of interpersonal skills and a good attitude. I’ve been fortunate to have great mentors along the way—all have greatly influenced my career. I intend to do the same for others.”

“I’m a business leader first and an HR professional second.”

“I have the best of both worlds—I manage a growing company and I’m in a position to help people save lives.”