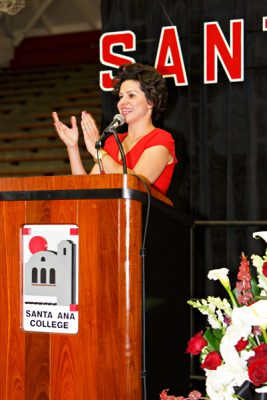 When Christina Romero first stepped onto Santa Ana College’s campus as a student in 1996, she didn’t plan on becoming a fundraiser. Having struggled in high school academically, she wasn’t certain what she wanted to do.

But she fell in love with the tight-knit college and was struck by how much the teachers actually cared about their students. “Everybody needs individuals to care about them,” Romero said, “and Santa Ana College is a place where people really care.”

That caring helped her flourish and stuck with Romero. When she later got an opportunity to work at the school, Romero, whose mother immigrated to the U.S. from Egypt and whose father immigrated from Colombia, jumped at the chance. She began by doing economic development and small business training in the predominantly Latino community before taking on the role of executive director of the college’s foundation, where she focuses on raising money to help empower the school’s students through scholarships and educational programming.

“My work with the Santa Ana College Foundation has been a gift,” she said.

Located in a city where more than 78 percent of the residents are Hispanic, Santa Ana College serves a mostly immigrant population. The majority of the students who attend the school are first-generation Americans. As the child of immigrants herself, Romero’s work has been incredibly meaningful to her.

“Growing up as the daughter of immigrant parents who came to this country because they wanted a better life for their family, I feel I have a personal bond with these students,” she said.

Romero’s work raising money for things like scholarships helps students at the school tremendously, but the Santa Ana College Foundation goes further than just providing scholarships to students. They also reach out to the local community through a signature college program, Padres Promotores de la Educación, that the foundation helps fund.

“Padres Promotores,” Romero said, “is a parent-led educational program that teaches parents about the importance of college and empowers them to help their children prepare early. A core aspect of that program is providing financial education around going to college.”

Since some local students choose to start working after high school because their families don’t know how they would pay for post-secondary education, the outreach program is meant to help immigrant families understand that college is an achievable option.

“When we tell them about the financial aid that is available to them through the state, the federal government and private scholarships, we see the walls begin to come down,” Romero explained. “They start to believe that college is accessible to their families.”

In Romero’s experience, that knowledge doesn’t benefit just the students. “I have often seen parents become students at Santa Ana College, as well,”
she said.

The financial education that Padres Promotores provides doesn’t just empower families to consider college, but it functions as a gateway. “While there is still a lot of education needed in these communities, the right partnerships can be the beginning of lifelong financial planning and empowerment,” she said. This empowerment helps families shift from focusing just on making ends meet to making more long-term financial plans.

Romero is so motivated to help the students in her community because the young people who benefit from the Padres Promotores program and the scholarships that the Foundation gives out are so remarkable.

“They represent the dynamic promise of our country,” Romero explained. “When I hear stories from students and they tell me about the things they had to struggle against, I’m constantly humbled by their lives and by their ambition.”

Many of the students that the foundation has helped have gone on to great things. One in particular is headed this fall to Harvard Medical School after studying nursing at Santa Ana College. Others have ended up at Berkeley and UCLA or have graduated from Santa Ana College and become successful professionals.

It’s these students who work so hard to get an education that make Romero glad that she’s able to devote her professional life to helping the Santa Ana community. What touches Romero most about her work is that she gets to see how the success of the students transforms their lives and the lives of their families.

“I want more for our students. I believe that these families and these students should be given the same chances as anyone else. They are so bright,” she said. “They’re the future. They’re exactly what makes America so great.” 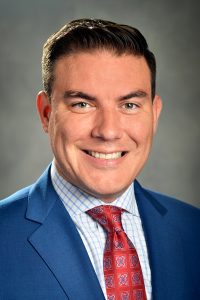 Christina knows the value of financial planning in her own life. Christina works with Northwestern Mutual financial advisor Erik Gomez to plan for her own family. It was a wakeup call when her mother died suddenly six years ago, not long after Christina gave birth to her two boys, Gavin and Emmet. Christina and her spouse originally approached Erik to take out life insurance policies. Now they work with Erik on a financial plan that’s designed to protect what they’re earning today and grow their wealth for the future. Romero said, “I decided that I didn’t want anything less than full financial security.”

How Maryanne Piña Frodsham Is Leading a New Path for Latinos