Diversity, equity, and inclusion (DEI) are increasingly relevant points of discussion in the corporate, government, and academic sectors as leaders face increased accountability and the imperative of social responsibility. In these conversations, however, the underlying challenges faced by underrepresented groups are neglected.

For Latinas, one challenge is in facing stereotypes that prevent us from having an authentic voice. We have to constantly check our culture at the door, minding gestures and tones to avoid being typecast. Media—including entertainment—often does not represent our identities and instead reinforces these stereotypes. Stories crafted about Latinas and even social media movements have missed the mark.

On top of this challenge, what I’ve found to often be the biggest barrier to Latinas’ success is: each other.

Having been in the DEI space for more than ten years, I have witnessed and experienced firsthand an increasing number of Latinas in positions of influence or “power” who, rather than supporting their fellow Latinas, actually disempower them, often in a very contemptuous manner.

I have witnessed and experienced firsthand an increasing number of Latinas in positions of influence or “power” who, rather than supporting their fellow Latinas, actually disempower them, often in a very contemptuous manner.

Why? Various factors may contribute to this, including the intimidation of competition instead of alliance with fellows. As a marginalized community, Latinas face one of the largest pay disparities and one of the lowest percentages of representation in leadership across all sectors; it is no wonder we are often pegged against each other. The perception—and perhaps truth—is that few senior-level positions exist for Latinas. We often only see a handful of Latinas being celebrated.

Recently, Representative Alexandria Ocasio-Cortez spoke about conflict occurring under a scarcity mind-set. This is a losing battle for all Latinas.

As such, Latinas have not been exemplar in pulling each other up. The idea that there is only room for one Latina or that only a handful can thrive on a larger scale is a contradiction to any DEI efforts, which tell us there is enough room for all of us to thrive.

As an underrepresented group, Latinas already feel lonely at various stages of their careers. Compound that with cultural discrimination and unconscious bias, add in the scarcity-mind-set making us unsupportive of one another, and the end result is that we keep each other at arm’s length.

The key, as Latinas, is to be aware of the barriers and challenges we place on each other that have hindered opportunities to expand our presence, our voices, and our ability to carve out spaces at “the table” for one another.

With many young Latina professionals facing the same challenges, there have been outlets and groups created to focus on turning this around, such as the Latinista, a national network of Latinas focused on elevating themselves, their communities, and each other.

As I move forward in my career, I must remember that leading by example is key and I must continue to serve as a mentor. Having personally experienced these barriers as well as experiencing them indirectly while working in the DEI space, I know that cultivating an inclusive culture and asset-based mind-set are priorities for creating effective lasting change. It requires a lot of forethought on how we can serve as mentors, allies, and champions for one another—and for the generation behind us—as we take on leadership and influential roles.

We each have our own story, and while our individual experiences may not represent us all in our entirety, our collective voices matter. Together, we will rise—but we must lift each other up along the way. 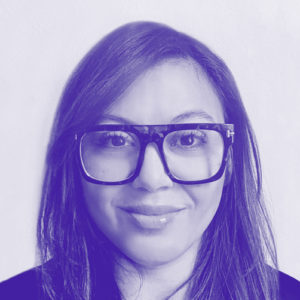 Vasquez holds dual bachelors and dual masters degrees in International Development and Latin American and Caribbean studies, and has been appointed to various commissions by the mayors of Miami, Washington, DC, and Los Angeles.

NextGen Collective: How to MBWA Effectively

Liliana Gil Valletta to Leading Latinas: “We must push and pull each other up.”

Zoe Saldana on Sisterhood Over Competition

Ruth Giansante Brings It All Together at World Fuel Services